Rising the next day, the party prepared for their assault on the bandit camp. But without Darnorth and Turrick, who had wandered off to explore some old dwarven ruins the halfling had discovered. A nighttime approach was deemed best. The party (and Booh) left the tower late in the afternoon, arriving on the outskirts of the bandits lair some 4 hours after dark. On the hillside above lay the bandit camp of three largely intact buildings. While most of the party sheltered in a copse of pine, Kern and Gurruk crossed a stream and climbed the steep hill leading up to the camp. At the top, they quickly noted a pair of guards to the east, sheltered behind a tumbled stone wall.   Slipping back down the hill, they moved further east so they could approach the picket from below. Unfortunately, Kern slipped while crossing the stream, making enough of a noise to alert the guard on picket duty above. Gurruk quickly raised a wolf call, which seemed to lull the guards into some complacency of familiarity. Carefully climbing again, Gurrak and Kern fell on the men, and slew them after a quick struggle in the dark. Leaving the bodies, they proceeded to cross the old trail to get closer to the bandits shelters, but Kern again slipped and fell, cursing Belix as he tumbled. This time, someone in the main building heard, and a party of men came out to investigate. The chance for surprise gone, Kern stumbled back down over the hill to fetch the rest of the party, while Gurruk covered his retreat with more wolf howls and then climbed a nearby tree to keep close and observe.

The bandits headed to the nearby picket, and discovered the dead men. They raised the alarm, and a flurry of activity could be heard inside the two barracks buildings. In minutes, armed men began to pour out of the door of the main building. By this time, Kern had led the party up the hill, and Erijay released a sleep spell, dropping the majority of the bandits in their tracks. As the two sides started to trade missile fire, a second group emerged. They paused at the door, words of magic could be heard, and this smaller group then headed at high speed for the stables. At this point, Bjoern cast another sleep and took out the rest of the first group and about half of the second.

While all this was going on, Gurruk dropped from his tree and proceeded to pour oil around and set fire to the other barracks. This hastened the exit of its occupants. Seeing the battle raging to the west, this third group choose to let their building burn and opened crossbow fire on the party. Said party, meanwhile, was heading at top speed to cut off the second group of bandits (which  appeared to include Janus and a magic user) from the stables. The bandits moved with unnatural speed however, and ducked into the stables and barred the doors before the party could cut them off. Frustrated, Booh, Riley, and Gurruk (having now rejoined the party) tried to push over the rickety wooden stables, while the rest of the party exchanged fire with the third group of bandits. They were soon surprised to see the door swing open behind them, and there stood the stout magic user, who cast a sleep spell on the party. This gave the bandits their break, and as the still standing party members peppered the magic user with arrows and bolts, Janus and his four companions burst from the stables. Pulling the magic user onto one horse as they rode, the hastened riders used lance and hoof to clear a path, and galloped to join the third party of bandits.

At this juncture, Booh was sent into the fray. The big brute lumbered forward to engage the bandits, and several of the footmen fell to his club, while the horsemen stuck him with their lances. Standing aside from the fight, Janus called out for the party to lay down arms and talk like honorable men. With Booh now in the mix, the party decided to keep fighting. At this point, Janus joined his embattled men, and let his war hammer fly at the giant. With a resounding TWACK, the hammer hit the giant square in the head, splitting his skull and dropping him dead to the ground. For a moment all stood in stunned silence, the Erijay quickly cast charm person on Janus to try to gain a negotiating advantage. The party hollered out a belated acceptance of the truce offer to Janus. He surprisingly accepted, even though he now held the upper hand. And so the two sides met in the middle of the battlefield. 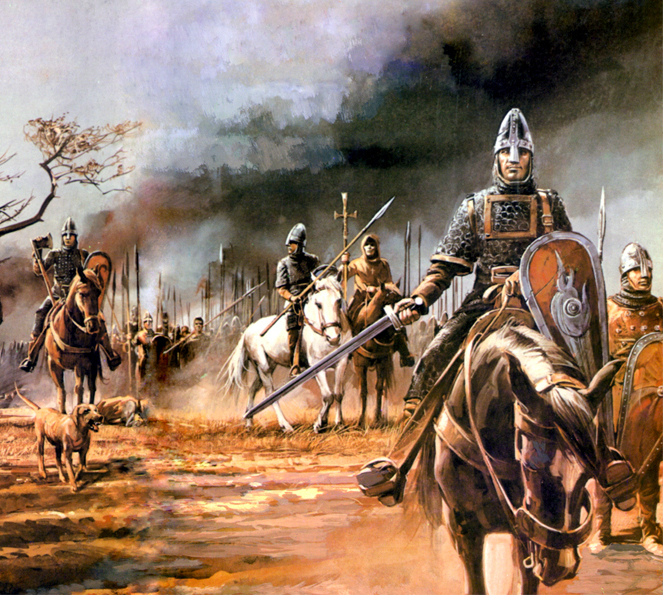 Sir Janus of Lacewood, as he now gave his full name and title, was an exiled knight of Westmist. He had been a loyal servant of Durgan the Bold, the previous March Baron. When Durgan was lost searching for his son, Duncal, in the depths of Stonehell, Janus did not believe that both were dead and gone. When Lord Merdwyn purchased title to the March Barony from Durgan’s widow, Sir Janus called on a favor from a clerical Highest Virtue in Kingsford. The churchman was able to consult the god Velas and confirm that Duncal was indeed still alive. Armed with that information, Sir Janus first confronted Lord Merdwyn, and then fled into the mountains with his loyal retainers, rather break his oath to protect and serve the house of Durgan. Since then, he and his men have dwelt in the mountains, acting whenever possible as a thorn in the current March Baron’s side. The party, moved by his story, pledged to join him in his struggle. But on a much more low key tack, using their ‘in’ position with the March Baron and their in town location to help. Sir Janus agreed, and sent one of his loyal men, Hafus, back to Westmist with them to act as his voice and as a contact between Sir Janus and the party.

So accompanied by the disguised Hafus, the party returned to Westmist after an uneventful trek back through the Western War Peaks.  There at the house the loyal Riker met them, with a letter from the wizard Asflag for Erijay, and a parcel from Mademe Bella’s Dress Emporium in Kingsford for Kern. And a summons for the whole party to present themselves before the March Baron the next day, as he much desired to speak to them …