Standing over their fallen foe, the party’s thoughts turned to pressing matters; looting the body. Darnorth claimed the strange light-sword, Kern stripped the body of its jumpsuit, and Turrick proceeded to collect all the jeweled chains. And Riley claimed the head itself, as proof for the March Baron that their mission had been a success.  That done, Riley next used the Rod of Narissa to bring the fallen Bjorn back to the land of the living and from the halls of his fathers. Then it was time to get out while the going was good.  But first a stop was made at the chamber of the glowing green goo to see if it was still the same now that “He” was dead. It was, and some further fiddling around with it revealed no more information. Darnorth did claim the strange metallic cube and cylinder that sat on top of the brass plate, however. And at this point the sound of braying horns could be heard very nearby, an indication that perhaps the party had delayed too long and had best make tracks to get out of the fortress. 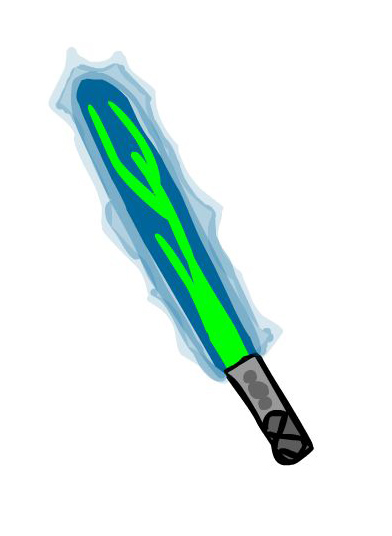 Heading out into the foyer on this floor, they ran right into a squad of hobgoblins coming up the stairs. A flurry of fighting saw two of the creature’s fall, which panicked the rest into flight. The party followed, slaying one more hobgoblin on the stairs, before the guards pulled out of sight. The party continued to race down to the basement and the sewers, dodging a flurry of crossbow bolts as they passed through the grand hall where the hobgoblins had been reinforced and rallied.  In the basement, Kern, Darnorth and Turrick, using oil and arrows, set up a rearguard at the bottom of the stairs. Everyone else dropped one by one down into the sewer. The last to go was Darnorth, who took out one last hobgoblin before jumping down into the fetid water. With the sounds of more horns behind them, the party headed back through the sewers, emerging just a few hours before dawn back where they entered. There they were relieved to see the three orkin still waited with Sweet Jenny, who was luckily still standing and not in the stew pot. After squeezing a reward out of Kern for not eating his mule, the three melted into the darkness. A tactic which the party copied, heading back towards the breech, hoping to reach it before dawn.  They did make it to the barricaded centre of the city before the sun rose over the horizon, and then picked up the pace and to get out before it was too light. Just crossing the old palace grounds, they were found by a patrol of about 20 hobgoblins, which proceeded to alternate between chasing the party and firing on them.  Amid the hail of bolts, the party made it back to the breech. The folding boat was launched and the party and livestock loaded, and they soon pulled out of range of anything but hobgoblin curses and taunts.

Wisely choosing to not land on the north shore, the party rowed across the lake to hide in the forest for the day. Setting up camp, they were interrupted by a group of giant ticks that descended from the trees. A short battle ended that threat, but not before one of the wolves and poor Foxy the war dog perished. Excitement over, everyone caught up on sleep, rising at nightfall. First order of business, Riley called on Habuu to heal the unfortunate Erijay of her mental affliction, which the mighty god was able to do.  Next, the party loaded up to head across the lake and recover their buried giant treasure. And spy on the ruins of Mor. Making it into the hills before sunrise, the treasure was recovered without incident. Gurruk and Kern crept to a good vantage point, and observed a huge amount of activity as patrols fanned out from the ruined city. Presumably to hunt for the party, who chose to sleep again for the day and travel back to Westmist by night.  Several nights of travel passed without incident, until just as the sky began to brighten on the 3rd morning. Over a low rise in the distance came a hobgoblin patrol of at least 30 foot soldiers, escorted by another hobgoblin riding a large bipedal dinosaur. Erijay and Bjorn neutralized the foot soldier threat with a pair of sleep spells, while everyone else aimed their missile fire at the dino rider, dropping him from the saddle with a flurry of arrows and bolts. All that was enough to scare off the rest of the hobgoblins, who fled dragging as many of their sleeping comrades as possible, with the dino trotting along behind. The remaining hobgoblins were put into a permanent sleep by the party, who quickly looted the bodies and then went in search of a place to spend the night. 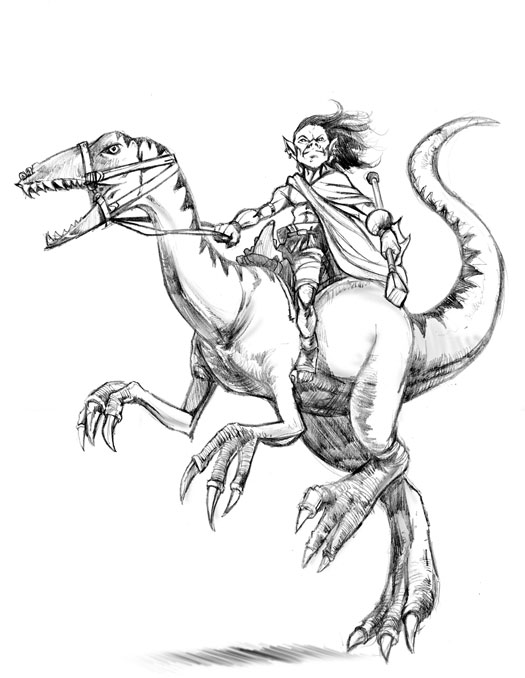 Three more nights of travel found the party safely back under the walls of Westmist. Trying their best to enter without undue notice, the first day back was spent sorting and appraising all the treasure.  Darnorth experimented with the light-sword and discovered how it worked. And also discovered (due to a little altercation with Turrick) that it was a weapon of potent ability. The halfling then claimed the weapon as his own, in payment for his injuries. Kern meanwhile experimented with the woven jumpsuit, finding that it was a form of mysterious armor, vastly superior to his leather.  And now all that was left to do was meet with the March Baron with news of their successful quest and to claim their just rewards …
Posted by ChrisS at 7:43 PM