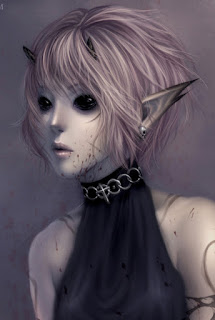 "One would expect to find frolicking elves in a fey and sylvan setting such as the Forest of Wyrd. There are, however, none, at least as we understand the race in the rest of the known lands. The dark fey resemble our own elves but superficially, being a wholly alien people. These creatures of Chaos will at times kidnap human children, for reasons known only to themselves. These unfortunates they then release back to the human world, but years or centuries later (time having little meaning in the dwimmer realms.) These Changelings or Half-Elves have inherited some of the magical powers and the taint of Chaos of their captors, and are shunned and feared by all others ..."

Mechanically, changelings are identical to elves (LotFP Rules and Magic p23) with one exception. Instead of drawing spells from the magic user list, changelings use the Illusionist spell list from the "Labyrinth Lord Advanced Edition Companion."  In addition, changelings do not use spellbooks as their magic is inherent to them. They  prepare and cast spells as per the rules for clerics (LotFP Rules and Magic p75). The exception is that they may not research new spells; changelings are are limited to the above spell list.

Changelings also exhibit a clue to their fey nature, in the form of some unusual physical feature. This can include:

This feature should be difficult, but not necessarily impossible, to hide.