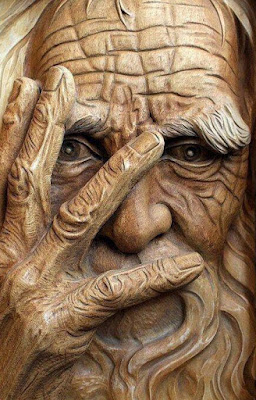 "No dwarves are known to dwell within the confines of the Forest of Wyrd. Instead there is a race known to men as the wood gnome. Short and wiry, with rough skin the color and texture of bark, the wood gnome appears to be hewn of the very trees he dwells among. Rather than masters of rock and stone, the wood gnome speaks the language of wood and earth. Generally reclusive and solitary, it is rare to encounter more than one at a time, and only adults have ever been seen.  It is likewise unusual for them to stray far from their forest home, but some will involve themselves in the affairs of men and are known to be stalwart foes of Chaos and the Dark Fey."

At Home Among the Boughs and Boles:
The wood gnome is at home among the trees, and as such has a higher initial Bushcraft skill than others when in any forested terrain. This skill level also increases as the character increases in level.

Short of Stature:
Due to their small size, Wood gnomes may not use Great Weapons.

Enchantment of Root and Earth:
Wood gnomes may cast spells which draw upon the deep enchantment of the Forest of Wyrd:

Wood Gnomes prepare and cast spells as per the rules for clerics (LotFP Rules and Magic p75). The exception is that they may not research new spells; wood gnomes are limited to the above spell list.

In order to cast spells, the wood gnome may be no more than lightly encumbered; he must be able to freely feel the arcane power of the Wood.