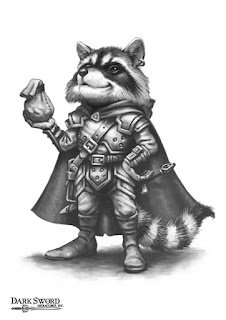 "The underlying magics that infuse the Forest of Wyrd sometimes morph the woodland creatures such that they take on human-like form and intelligence. These are known as the Hedge Fey. These are generally a mirthful and jovial folk and, unlike the other unique races from the borders of the fey realm, are welcome by one and all. They walk upright, 2-4' tall when standing erect. While many continue to live in forest burrows and dens much as their lesser kin, others have transitioned to live much like Man and can often be found in and around human settlements.

Anyone playing Hedge Fey must first select the base creature from which their character has been uplifted. This can be any normal, small, woodland creature (ex: fox, squirrel, ferret, raccoon, etc). The character gains up to two minor special abilities based on its ancestry. These are selected by the player and approved by the DM. If just one special ability is selected, it may be a combat or attack variety. For example, a skunk hedge fey could spray a stinking cloud once per day.  If two are selected they must be non-combat and non-lethal.  For example, a chipmunk hedge fey may have the ability to carry an extra encumbrance step in its cheek pouches. Or run for short distances at triple speed. Or unerring find nuts and fruit.  And so on.

Other than this special ability, Hedge Fey are mechanically  identical to halflings (LotFP Rules and Magic p25)