From “Expansion of the Three Fold Faith across the Known World” by the Most Virtuous Athenfae of Kalin: 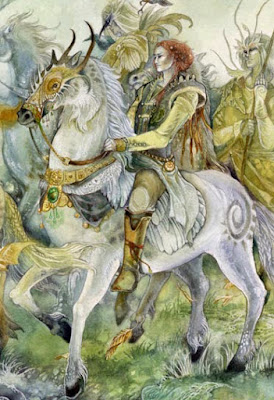 “… when the Imperator Vilorian the Second carried his sacred banners north into the Forest of Wyrd, the first great shock of the campaign against the Dark Faerie was the loss of the powers of prayer by those servants of the church who'd accompanied him. There is little doubt this was due to the local heretical worship of saints rather than the true gods Habuu, Velas and Salue (blessed be the three!). Curiously though, after some time in the Forest, several knights of the Imperator's close retinue found divine connection to the gods and received their favors. Or perhaps, as some whispered, they drew favor from the primeval powers of the Forest rather than the Three. In any case, the power now remains for these wyrd paladins. Some 300 years later, the spiritual descendants of the Imperator’s crusaders continue to roam the Forest of Wyrd and protect the realms of men from the Chaos of the Dark Faerie..."

Hands of a Healer:
Once per day, a paladin can heal 3HP per level by laying his hands on the wounded or injured. This can be split between multiple recipients.

Skilled Warrior
Wyrd Paladins start with the same attack bonus as the fighter (+2); this increases by +1 every third level  (i.e. at 3rd, 6th, 9th, etc)

Paladins prepare and cast spells as per the rules for clerics (LotFP Rules and Magic p75). The exception is that they may not research new spells; paladins are limited to the above spell list

Protection from Fey, 10' Radius:
A paladin may set up a circle which will protect from all faerie creatures, both dark and light. This  takes 1 turn, and the protection continues as long as the protective circle is not breached and the paladin remains true in mind and deed. Protection is automatic from all creatures of HD equal to or less than the paladins' level. Fey creatures of greater hit dice can pass the barrier if they make a successful save vs magic.

Summon Steed:
A paladin of 4th level or higher may call for his or her fated steed. This is an intelligent animal, bonded by the Fates to the holy warrior. It is faithful unto death, will never abandon or betray the paladin. The steed will typically take the form of a heavy warhorse (HD 5+5, AC5) with the speed of a riding horse [120"(40")]. However, other options are possible at the DM's discretion. For example:
Limited Possessions:
A paladin may never own more than eight (8) magic items, and may retain only enough treasure to support him or herself in a modest manor and pay his or her retainers a fair wage.

Champion of Law:
A paladin must be lawful in alignment. If the characters alignment ever changes for any reason, he or she loses all special abilities and becomes a fighter of the same level. If alignment is returned to lawful, the paladin may regain his or her abilities after completing a suitable penance or quest.