Taking a day to recover from their travels and clean off the dust and grime of the road, Riley (with Gurruk), Darnorth, Erijay, and Kern (with Bjorn) headed to Westmist Keep to present themselves to the March Baron, and report the success of their mission. Upon arrival, they were quickly led into a small chamber off the main hall, and in short order Lord Merdwyn arrived with a pair of his retainers. While first somewhat surprised to see them, he listened intently to their story, and graciously accepted the head of "He Who Walks in Metal" and the red leather portfolio that contained the information incriminating the Earl of Neth. The March Baron expressed his gratitude, but regretted to inform the party that at this time he had no reward to give them, as resources were short given the military preparations underway. A reward had been promised, however, so a reward would be provided in due time.

A little miffed at their treatment, the party prepared to follow-up on the story they heard from Sir Janus, that Duncal, heir of the previous March Baron, still lived and was to be found in the depths of Stonehell. They discussed their plans with an increasingly skeptical Hafus (Sir Janus' man), who slipped out of the city that night to carry news to Sir Janus. Then it was back to Stonehell, in particular to find Lachesis and get information from her about Duncal. And so Kern could present her with the dresses he had had made for the veiled lady. Lachesis was quite touched by the gesture, but unfortunately could not offer any information on Duncal. She did agree to find out what she could (for a suitable fee), and so the group trudged back to town to cool their heels for a week before heading back for another conference with the spy mistress. This time leading Sweet Jenny laden with gold. Delayed slightly by a group of spitting beetles, they found Lachesis in conference with a slim elf. Introduced as Theosis, the elf eyed the party with a combination of fear, loathing and curiosity, before being led away by Rufus and Tusk.  Lachesis, waving off questions about the elf, told the party she'd learned that Duncal was a slave of the mountain trolls deeper in the dungeon. While she could tell little else, she could confirm that he did still live and was in reasonable good health. 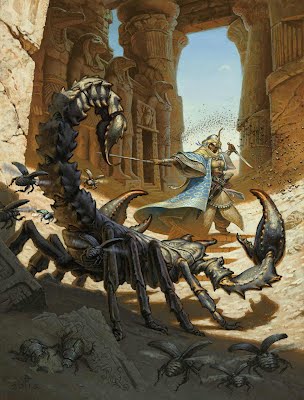 Paying the lady her fee, the party headed down the only stairs they knew of to the next lower, and found themselves in large chamber with a sand filled fountain in the centre. As they approached, a scurrying sound brought three gigantic scorpions to face them and a fierce melee ensued. While the fight was soon ended in the party's favour, Erijay was struck by one of their venomous tails and met a poisonous end. Riley used the Rod of Narissa to bring the unfortunate elf back to the land of the living, but was distressed to see most of the gems remaining on the Rod go dim. That taken care of, the party decided to go west into unworked caverns. In short order, they encountered a four way intersection containing a small band of kobolds. These were at first reluctant to talk; it seemed some of the dungeon factions were starting to grumble about the kobolds getting too cosy with the 'outsiders'.  This chill was broken by offers of surface food and news that the scorpions were dead, allowing easier travel up and down the stairs for the little dog-men. Pumping the kobolds for information, the party learned the general direction to a route down to the trolls' level. They also learned that the level they were currently on was occupied by the "Gentleman Ghouls, ogres, and berserkers.

Waving the kobolds on their way, the party continued west. Here they crossed a bridge of worked stone that spanned a crevasse filled with a rolling purple mist. Reaching the other side without interference, they now found themselves in a large chamber. The walls and ceiling were of jagged red-black stone, and old bloodstains were evident on all surfaces. At the far side of the chamber lay a pair of double doors, embossed with a scourge ending in serrated blades. Immediately uneasy here, Kern carefully examined the door for traps. He sensed something was amiss, but couldn’t find any mechanical trap. Taking care to not touch the door, he picked the lock, and then stood back while Riley threw a dead giant scorpion at the doors to open them. Unfortunately, the arachnid battering ram didn’t work, as the doors were barred from the inside.  Instead, Erijay and Darnorth used a sword and brute strength to lift the bar out of it’s brackets, and then carefully pushed the doors open with a 10’ pole. 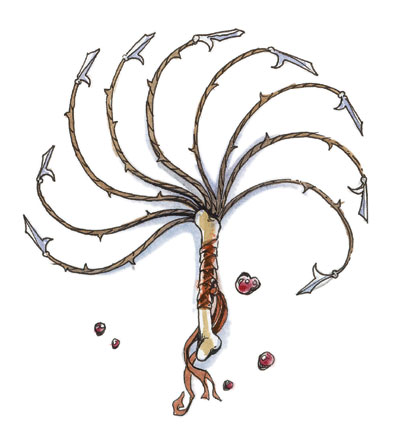 Inside was a foyer decorated with frescos of a variety of races and beings under torture. Ahead an iron rail could be seen, which marked the edge of a balcony surrounding a large room below. A pair of staircases led to the floor of the room. Choosing to not descend just yet, the party moved around one side of the balcony. From there they could see the floor was covered in skeletal remains, and a blue black stone alter stood below them. Darnorth used his boots of levitation to descend towards the alter, but was immediately set upon by four incorporeal, shadowy figures. Fighting madly, he lured them back to the balcony so the rest of the party could join in the battle. The beings were defeated, but not before many of the party had been struck and had their strength temporarily drained by the chilling touch.

Figuring now the room would be safe, the party descended to the bone covered floor. Before they could investigate further, however, a sound of moving metal and faint screams and groans was heard from behind. Turning, they saw what looked to be two sets of animated platemail, which had moved to block their exit up the stairs. The armour, adored with barbed spikes, hooks and protrusions, bore faintly feminine features. And each was armed with a wicked 10’ long scourge.  In order to avoid being trapped in the room, the party attacked. The constructs flayed about the party with their scourges, hitting Erijay who became wracked with pain and unable to move. They didn’t stand up long against the party’s weapons, however, and the elf maid soon recovered. And in fact decide to don one of the now inanimate suits of armour herself.

Deciding there had been enough excitement for one delve, the party quickly examined a few doors, and then returned to house and hearth for rest and refit.
Posted by ChrisS at 2:13 PM