With Turrick still in bed recovering from rat bite fever, Kern, Darnorth, Riley and Erijay headed back to Stonehell to search once more for signs of hobgoblins. They also brought along a small entourage consisting of the men-at-arms Roth, Hengest and Guy, the cleric Yar, and the war dogs Ruffee and Fonzi. And of course the faithful mule Sweet Jenny, who seemed almost eager to enter the depths once more. Before heading back to the crypts to search for stairs down, the party stopped to question Rocky the Oracular Head to gather more information.  From the stone head they learned the closest stairs down were in the far northeast corner of the crypts, that the best way to help him was to find his brother, and engaged in a rather philosophical discussion of the relative nature of large and small. None of which was particularly helpful.

Back in the crypts, they party headed south again to continue the explorations started on their last visit. Breaking open several new crypts, they encountered a handful of zombies and skeletons that were quickly eliminated.  In the next crypt, however, they encounter a greater challenge and mystery. Two roughly humanoid forms, made of swirling dust, rotted linens, bones chips and shadows, rose from the debris strewn floor to attack. Alas, poor Yar fell quickly, battered to death by grave detritus when she was engulfed by one of the creatures. The rest of the party finished off the frightful being, but did find many of their attacks were less than effective against the partly incorporeal things. Only Erijay with her magical battleaxe was able to strike telling blows. 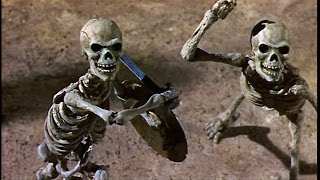 Coming to the end of the crypts, the party discovered a spiral stairway going down. Descending, they noted a faint marshy smell, and on reaching the bottom of the stairs observed that this area of the dungeon was quite damp, with a feeling of oppressive moisture in the air. Undaunted, they first explored an octagonal room, with a pillar covered in snake carving in the middle. After Kern had prudently checked for traps, the party approached so Darnorth could use his dwarven eye to examine the stonework closer, discovering the remains of a stone snake statue on top of the pillar.  Finding nothing further of interest, they headed east. Before going too far, they were startled by a low rumbling sound that made the floors shake, and caused dust and small debris to fall from the ceiling. After a minute or so, they rumble stopped.  The party then moved on to a room whose walls were covered in crude pictographs of lizards-like humanoids, while in the room itself was a series of totem poles festooned in feathers, skulls, bits of glass and stone.

After quickly checking out an old guardroom, the party continued east, soon coming to an area of natural, unworked stone. Here, the floor was covered in a thick layer of mud, in which the clawed tracks of some unknown creatures could be seen. Boldly, they pushed on to reach a small natural cavern, where they were immediately set upon by a band of lizardfolk that stood guarding the way.  Giving the party no time to talk, the lizardfolk attacked, and were slain with relative ease. Moving across the room, the party was surprised by another band of lizardfolk. This group made short work of the men-at-arms Guy and Hengest, and left a mark on the rest of the party, before being added to the lizardfolk charnel house on the floor.  Exiting the other side of the room, the party was one more beset by lizardfolk, getting caught in a narrow tunnel by their scaly foes. These were supported by what appeared to be their tribal shaman, who quickly took out both of the party’s spell casters with well placed hold (Riley) and silence (Erijay) spells. At the same time, the lizardfolk warriors laid blow after blow on Erijay and Darnorth in the front rank, both of whom were now facing death. While Kern provided cover with his crossbow, Darnorth used his boots of levitation to rise above the fray and retreat. Erijay, barely avoiding a death blow, backed away on foot and the two war dogs Ruffee and Fonzi were sent forward to cover the retreat. Darnoth and Erijay joined Kern with their missile weapons while the dogs held the attacking lizardfolk in the narrow corridor.  There ensued a close fight, with the dogs biting into their foes, and the three crossbow wielding archers (with Erijay getting double attacks thanks to a potion of speed ) picked off the enemy ranks one by one. The party prevailed, with their only loss being the brave Ruffee. 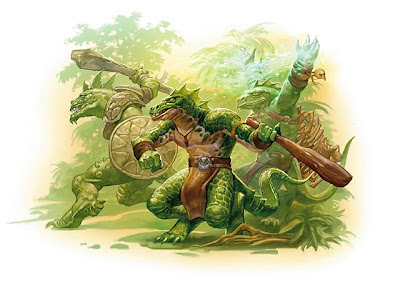 Sifting through the now gore covered floor, Darnorth discovered a fine longsward clutched in the hand of one of the fallen lizardfolk, while the others recovered a few bits of jewelry from the bodies. Now very cautious, the party moved forward again, sending Kern ahead to scout in silence. He found the narrow tunnels continuing in several directions, while the rest of the party discovered a larger chamber with a tall mud mound. The mound had a small door covered in a hide flap, which Darnorth pushed aside as he entered the dark interior. Inside, the iron stomached dwarf encountered a horrific smell that almost brought up his lunch, as well as finding a room with reed mats and a variety of totems and medicine bags scattered throughout.

While Kern was eager to push on, the party elected to head back to town, given their rather battered condition. Loading their treasure and their dead on Sweet Jenny, they encountered a band of kobold workers on the way out, who provided more information in rerun for a square meal of ‘surface’ food. They learned a little more about the hobgoblins, including their general location and their mainly antagonistic relationship with the rest of the dungeon inhabitants. The kobolds also revealed that the rumbling sound head earlier was the sound of an elevator room that connects this level to the levels below, a room the party has passed close to earlier in their exploration.

Back in town, the party restocked crossbow bolts, while Darnorth found that his new sward was magical. They also had a visit from one of the Baron’s lieutenants, who was rather underwhelmed to find the party hadn’t actually seen a hobgoblin yet, let alone gather and useful intelligence. While the charismatic dwarf did his best to put a brave face on their expedition, Lord Merdwyn was not amused.
Posted by ChrisS at 9:39 PM