Westmist Session #18 - We Should Have Brought the Mule


With Lord Merdwyn breathing down their backs, the party prepared to head back to the dungeon right away. Given the hasty departure, only Darnoth and Erijay were prepared go at once, leaving the others behind in Westmist.  Darnorth choose to take on the eager Roth as his personal hireling, and also engaged the services of three new men-at arms (Humore, Alson, Undic) for additional muscle. And of course, Fonzi the loyal war dog accompanied his mistress once again.

Determined to locate the hobgoblin redoubt, this time the party headed straight for the second level and started exploring the area to the south of the spiral staircase. Scouting ahead of the torchbearers and using infravision, Darnorth and Erijay examined a few rooms before coming to one with an old table and chairs in the centre. The top of the table was covered with silver coins, which immediately made them suspect a trap. After much prodding around with a 10’ pole, Darnorth simply pushed the table over, only to find the coins did not come loose. Prying one off reveled they had been glued to the table top. Not interested in wasting time prying off the low value coins one by one, Darnorth and Erijay let the men-at-arms grab  a few before heading on. Darnorth, still muttering about ‘those damn coins’, carelessly stepped on a pressure plate as they left the room. This set a huge blade in motion, swinging down from the ceiling, which barely missed the dwarf’s head.  Breathing a sigh of relief, they passed next through a room full of small beetles (and several giant toads feasting on the beetles), and then encountered an iron post driven in the centre of the corridor. On top of the spike was a human skull. Written on the skull in hobgoblin were the words “Patrolled Area Ahead – 6th Century, 9th Cohort, Hobgoblin Occupation Army”. It would seem at last the party had found their hobgoblins. 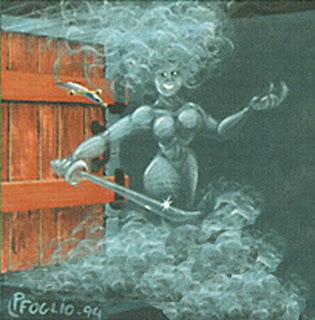 With Erijay and Darnorth again scouting ahead, the party explored a series of rooms, pumped some kobolds for information and fought a handful of giant spitting beetles, before finally coming to a locked door. This door was unusual as it was quite new, the fresh cut timber still oozing sap. Listening carefully, Erijay could hear hobgoblin voices on the other side. Now putting their plan into play, Erijay drank the potion of gaseous form provided by Turrick, and in her incorporeal form slipped under the door. On the other side she found a hobgoblin guardroom with 3 hobgoblins playing dice and complaining as only bored soldiers can. Listening for awhile, she heard a lot about how much easier it was here in Stonehell than with the armies in the field, that the raptor corps wasn’t such a hot posting after all, and learned that reinforcements were expected in Stonehell in the coming weeks.  Moving deeper into the hobgoblin lair, Erijay explored a dining and kitchen area, infirmary, mountain lions and hobgoblin handler, and a curious room with a white tiled floor and two glass and crystal spheres in the corners, before ending up in another guardroom similar to the first. Fearing now that the potions’ effects may soon wear off, Erijay headed back to the door where Darnorth and the rest of the party waited. Along the way she noted a corridor heading north from the tiled room, blocked off with rubble. She also noted that the new door was firmly barred from the inside, which would have made entry by conventional means very difficult.

Loaded with information, but with just Darnorth’s single silver coin and a few coppers to show in treasure, they decided to explore a little further. Going east to fill in some blank spaces on the map, they encounter a room with three kobold corpses. Immediately suspicious, Darnorth looked up just in time to see 2 giant crab spiders descend and attack. These were dispatched with relative ease, but not before the brave Fonzi fell to their venom. Heading back to the west, they party followed a twisted corridor ending at a set of double doors. Listening, Erijay heard a hissing sound on the other side. Warned of trouble, the party bust into what looked like a gladiatorial fighting pit, now occupied by a mass of pit vipers. Whipping out blades, the group attacked and killed one snake.  This frightened the rest, who slithered away below one of the other doors in the room, but not before the man-at-arms Alson fell to their fangs. 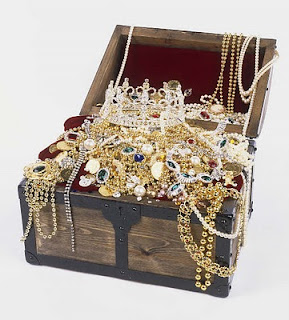 Although time was running late, Darnorth and Erijay decided to check one more room. Choosing the door opposite the one under which the pit vipers fled, they found a disused bedroom with walls covered crumbling broadsheets advertising pit fights from days gone by.  Before they could explore, a pair of shadowy figures descended on them, and a short but furious fight ensued. Luckily the party escaped with minor harm, except Erijay who temporarily found her strength drained by the touch of the beings. Now taking time to look around, the party noted that apart from some standard furniture, the most notable feature of the room was the massive strongbox against the far wall. This was latched and not locked, but Darnorth noted the lid was covered in a suspicious sticky substance. Assuming it was poisoned, Erijay used her 10’ pole to lift the lid, revealing literal ton of silver, gold, electrum, jewelry, potions and scrolls.  Once over the initial shock, everyone starts stuffing the most valuable pieces in sacks, backpacks, and pockets until they could hold no more. Carefully closing the lid again, they left a note on the chest saying “Danger – Deadly Poison!” and then proceeded to slowly crawl out of the dungeon, burdened by all their treasure. With uncanny luck, they made it back to the surface without incident and then headed back into Westmist with their loot. Cashing everything in, they ended up with almost 9000gp, plus a scroll of Ward vs Undead and three potions (Sweet Water, Clairvoyance, Human Control). Stunned by the amount of treasure, they almost forgot to report their findings on the hobgoblins to the Baron. Lord Merdwyn thanked them for the information and their effort, and asked that they again head into the dungeon to blunt that wing of the hobgoblin attack. And although short on men himself, he offered a squad of his own soldiers to accompany the partly next time.
Posted by ChrisS at 8:30 PM