Having missed many of the recent adventures due to ecclesiastical obligations, Riley returned full of vim and vigor, ready to take on the challenges of the dungeon. His new found crusading zeal was aimed less at the hobgoblins (who were deemed a little too powerful for a reduced group to handle) but the undead denizens of the dungeon. All agreed on the side-trek, and the trio of Riley, Erijay and Darnorth headed back to the crypts. Starting in the northern crypts where Kern and Darnorth had last explored, the group battered (and were battered by) zombies and skeletons with no reward but masses of cheap copper trinkets and an unusual travel worn but well made cloak, claimed by Riley.

Reaching the end of the corridor, they encountered a large pillared room that extended beyond their torchlight. While Riley stayed outside with the torch, Erijay and Darnorth scouted into the room with infravision. Before going far, they were attacked by another group of skeletons, easily handled with Riley’s help. Examining the room more closely, they noted the pillars were all carved with faces contorted in pain and extreme discomfort. At the far end stood a statue of a tall woman, dressed in leather with a veil over her face, and holding a huge flail in each hand. In front of the statue stood a jug. Carefully the party approached, and Darnorth gingerly poked and prodded the jug with a 10’ pole. After satisfying himself it was not trapped, he reached in to pull out several handfuls of silver coins. Unsure if that was a wise thing, he dropped in a few gold coins to compensate. The group next turned their attention to the statue. While in the process of trying to tip it over, they were startled by a sinister, creepy voice, which said “You are a brave group to toy with Sorcha, the Mistress of Pain”. Turning to look, they saw a humanoid figure standing near the door, draped in plain black robes. Questioning the figure revealed his name was Malfreces, and he lived here in the crypts with his ‘people’ (pointing at the jumbled skeletal remains at his feet). He gave the impression that he wished nothing more than to be left alone, and berated the party for having disturbed his peace with their explorations in the crypts. While certainly unsettling, he seems to pose no immediate threat, so the party hastily excused themselves from the room (with protest from Riley, who felt this individual was an evil affront to Habuu and should be destroyed).

They did not go far, however, and headed for the southern crypts where they dealt with more ghouls and zombies and recovered a few silver and gold coins for their trouble. Now rather battered by all the fighting, the trio headed back to town for a few days rest and healing. On their way out, they encountered another kobold work crew. Bribing them with ‘surface food’, they learned Malfreces rarely left the crypts and seemed uninterested in all others in the dungeon, and really did just want to be left alone for whatever reason. They also learned that the hobgoblins had been eerily quiet over the last few days.

Having exhausted all obvious options in this area, the three next headed east to fill in some gaps on their map. Unfortunately, while working their way around a previously identified pit trap, they were surprised by three crab spiders that dropped on them from the ceiling. One bit Erijay, who luckily shrugged of the poison, before they fell to a combination of the elf’s Sleep spell and a batting by the dwarf’s sword and clerics mace. Passing near the room in which they had a near disastrous ghoul encounter many weeks before, they were slightly disturbed to see that the spikes they used to bar the door had been wrenched out and the door was now free.

In the next room, they discovered stored preservation material including linens, embalming fluids, and bottled spices and strange liquids (which they gathered to take back for later examination). Listening at the next door, Darnorth again heard a slobbering, chewing sound inside. Suspecting ghouls, they choose to leave it for now. Instead they investigated a chapel of sorts, with prayers mats, frescos of mourners on the walls, a rack of ceremonial scourges, and a salt stained bronze font. After poking around the corridor to extend their map a bit more, they then discussed what to do with the ghouls. A plan was hatched, involving pouring oil under the door and lighting it on fire. A chorus of ghoulish screams was heard, and when the flames seem to have died down, Darnoth hauled the door open. They first faced a cloud of oily smoke, which obscured the surviving ghouls, who charged out of the smoke and fell upon the party. A relatively short fight ensued, which saw Darnorth paralyzed (but healed by Riley), before the undead lay dead once more. Rummaging through the gore stained room, they found a mass of copper coins mixed in with the offal, as well as a beautiful war hammer. This was quickly claimed by the cleric. 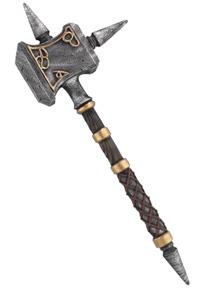 Headed back to Westmist again, the party stopped to battle with fire beetles (during which Riley learned his new weapon was indeed a magical war hammer +1). Rummaging through the trash, they also found the torso of an unfortunate adventurer with backpack still attached. In it they found a range of usual adventuring gear, as well as a small bag of coins and a notebook, blank except for a recipe for “Gnome Stew” on the first page. Back in town, they turned the bottles removed from the embalming room, and Riley’s cloak, over the Synthini for examination. After taking a day to investigate, she noted that the cloak was a journey cloak, designed to protect one form the discomforts of the road such as heat and cold and rain. Of the bottles, most were poisonous, but one proved to be a potion of longevity.
Posted by ChrisS at 9:07 PM