Westmist Session #20 - We're Going to Need Another Jenny (and Roth, and Barfirth, and ...)


Continuing to scout around the perimeter of the hobgoblin lair, Kern (with mule Sweet Jenny III) , Darnorth (with henchman Roth) and the two baronial guardsmen returned to Stonehell. This time they were accompanied by a purple robed and turbaned mage from distant lands by the name Salif the Stargazer. Headed to level 2 to explore around the lizard folk lair again, they were delayed for a short time by two swirling crypt shades blocking the way in the crypts.  Brushing those aside, they first went looking for the elevator that the kobolds reported was in the area. They found two rooms full of gears, chains and other mechanical bits, obviously the mechanism for the elevator. They also found a blank wall, which both Kern and Darnorth examined in great detail. They found that there was a gap around the edges of the wall, and vertical scratches seemed to indicate it moved up and down. But they were not able to find any controls.

Somewhat stymied, they resolved the rush back if they heard the rumbling sound again, and headed back to the lizardfolk lair to finish exploring that area.   First checking a bypassed door, they found a small room with a well in the centre. The clear water showed the  well to be about 10 feet deep, but when Darnorth lowered the bucket into the water, it passed right through the floor before coming to a rest after 20 feet in total. Intrigued, Kern stripped to his skivvies, tied a rope around his waist and had Darnorth and Roth lower him into the well. Passing through the illusionary bottom, he found a chest, which was pulled to the surface with the help of Darnorth and Roth. Inside they found a fair selection of gold and silver coins, which quickly ended up on Sweet Jenny’s back. 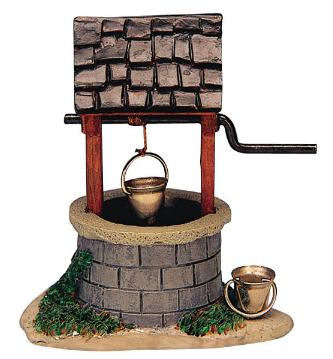 Heading now into lizardfolk caves, Roth ran into a trip wire which brought a deadfall of wood and ruble down on the party’s head. Shaking off the dust and binding their wounds, they noticed the two guards did not rise, and thus ended the March Baron’s contribution to their exploration. Moving forward cautiously, they passed through the cave of their previous lizardfolk battle, now cleared of bodies. Leaving the rest behind, Darnorth scouted ahead with his infravision. Poking his head around the corner, he was met by a volley of spears from a half dozen lizard men, accompanied by a huge lizard. Battle ensued, with the lizardfolk holding back and lobbing spears at the party. Salif made his contribution with a Sleep spell, which dropped about half the lizardfolk. As the party then pushed forward to engage in melee, the remaining lizardfolk awoke several of their sleeping number before falling on the intruders. It was a hard fought melee, and the lizardmen were able to get behind the party and fell the mage Salif (who was luckily saved from death by timely help from Darnorth) before being finished by the party. With barely time to recover, their breath, another band of lizardfolk attacked from behind and was defeated with some difficulty.

After binding wounds and loading the invalid Salif onto Sweet Jenny, the party continued exploration of the caves. Of note was a new mound in the room with the large mound previously discovered, which proved to be a burial mound for the lizardfolk slaughtered by the party last time.  Further exploration uncovered a few abandoned lizardfolk guard posts, what appeared to be the former quarters of the lizardfolk shaman, and a cave that opened onto a rushing underground river. This could not be examined more closely as the cave was also occupied by a large number of giant crocodiles. Slowly backing away, the party headed north towards another exit from the caves, and noted an odd buzzing sound ahead. Kern inched forward to look and saw three large flies buzzing around in the next room. After some debate, they decided to go after the buzzing vermin, only to trip a second deadfall trap as they left the caves, this one crushing Roth, Sweet Jenny, and the unfortunate Salif. With just the two of them now left, Darnorth and Kern decided the time had come to head back to Westmist.

After a few days of rest and recovery, Kern (with a new mule Sweet Jenny IV) and Darnorth (with a new man-at-arms Barfirth) headed back to the dungeon, this time to explore the crypts some more. Remembering the ambush after the last lizardfolk slaughter, they elected to approach the dungeon overland from the east rather than directly over the road from the south.  Arriving safely at Stonehell, they moved directly into the crypts, only to once again encounter giant shrews grazing in the main entrance chamber. Filled with a rage he didn’t understand, Darnorth charged at the rodents, which were quickly killed with support from Kern and Barfirth. That taken care of, the party head east into another area of crypts similar to those encountered to the south. Bursting into several, they fought a mix of zombies, giant rats and ghouls, and liberated a pile of gold in one room. Alas, Barfirth’s adventuring career was cut short by a zombie club, leaving Kern and Darnorth once more short of assistance and the decision was made to head back to town once more. 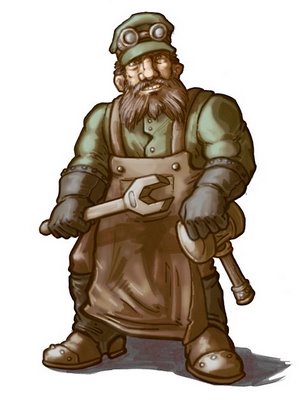 Too restless to rest, the two poked around town for and sights or rumors. In addition to watching the execution of a thief in the town square, they did overhear some fisherman complaining that someone was stealing tools and knives from their fishing sheds west of town.  Offering their services, Darnoth and Kern hid on a shed roof overnight, with unfortunately nothing to show for their efforts. They then paid a visit to Slate the dwavern tinkerer and engineer who had fixed up their house. Kern wanted to know if the dwarf could figure out some way to collapse the hobgoblins secret cave entrance, and then dig the party a new entrance so they could sneak in whenever they want.  Slate agreed to take the job, quoting price of 1200gp to collapse the tunnel and have his crew of dwarven diggers make a secret secondary entrance. Before work could start, however, Slate needed more information on the layout of the cave entrance as well as assurance that he and his workers would be well protected during their work (which could take a number of days to complete depending on the layout of the cave entrance).
Posted by ChrisS at 1:45 PM