Westmist Session #22 - Into the Hobgoblin Lair


Westmist was getting busy, as peasant levies were starting to muster, and bands of mercenaries and royal troops were arriving from the east , all preparing for battle against the hobgoblins. Prices were rising, and the March Baron had issued a decree banning the private employment of men-at-arms for the duration of the emergency. He also invoked the March Tax, locking the gates while his men combed the town to collect a head tax on every soul to help pay the costs of the war.

With the full team (less Turrick) assembled again, plans turned to finally dealing with the hobgoblins in Stonehell.  Confirming the previous deal with Slate, the dwarven engineer, to collapse the hobgoblins secret tunnel entrance and dig a new secret entrance for the party, they next headed to see the March Baron once more to ask for help. Lord Merdwyn was reluctant to lend further assistance, having already lost a number of his men while in the party’s employ. Darnorth, however, managed to convince him that they just needed guards to protect Slate and his work crew; they wouldn’t be used as dungeon fodder. Having agreed to pay the costs associated if any men were lost, the Baron turned over command of a band of 10 mercenaries to the party.

Leading an entourage of mercenaries and dwarven miners, the party made their way to the box canyon with the back entrance to the hobgoblin lair. Kern first scouted the cave entrance on the canyon wall, and once assured that the coast was clear, the miners and mercenaries climbed up and started their work. The party, meanwhile, prepared to enter the dark to scout the area inside for Slate and ensure there would be no trouble. Passing through the narrow 5’ entrance, their exploration got off on a bad foot when Riley hit a trip wire, setting off a loud gong, and obviously alerting anyone in the caves. Cautiously, they explored the first stalagmite and stalactite studded cave, then passed through another narrowing before entering the next chamber. As they emerged into the space, a rain of arrows from the right surprised them, several of which hit hard and deep. Turning, they observed a low log barricade, behind which a half dozen hobgoblins crouched, crossbows in hand. Preparing to do battle, the party first suffered another fusillade of arrows, which dropped Riley to the floor at the edge of death. Now enraged, Darnorth floated up with his pick  boots of levitation, and Kern gave him a hard push, propelling him towards the barricade. The dwarf, joined by Erijay on foot, flew over the logs and dropped right in the middle of the hobgoblins, slaying one with his sword while a second fell to the elf’s axe.  This was all too much for the remaining hobgoblins, who broke and tried to flee, but were cut down by Darnorth, Erijay and the now arriving Kern.

Carrying the fallen cleric, the party stopped the work on the tunnel and headed back to Westmist. There, they were able to convince the visiting August Virtue, Balinor of the Three Virtues (in town to preach a crusade against the hobgoblins) to resurrect the brave Riley so he could continue the church’s work and stomp some more hobgoblins. All, of course, for a moderate donation to the faith. 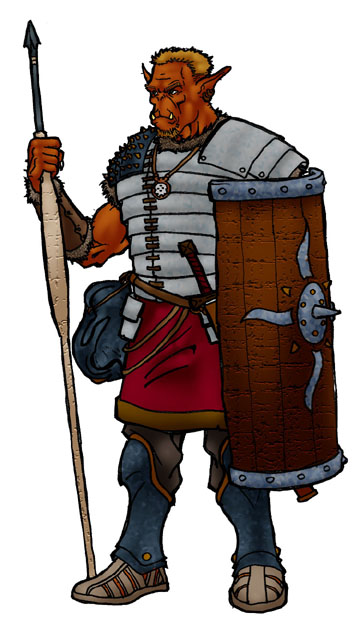 With Riley back among the living, the expedition departed again the next morning to start once more on the cave. When Darnorth glanced inside this time, he was greeted by yet more arrows. The dwarf grabbed Riley’s human sized shield and led a charge into the cave, where the 4 hobgoblin archers were slain before they had any chance to fight back. While Slate and crew started work for the second time, the parry ranged deeperinto the caves. They found the previous hobgoblin defenses deserted, and after exploring a few other caverns and following a small stream, they found themselves back in the worked stone halls of Stonehell. Heading west, they immediately encountered a barracks occupied by two large hobgoblin guards, who again were slain so quickly they had no chance to raise the alarm. Now heading north along a long corridor, they found several doors. At one, the keen eared Kern heard hobgoblin voices.  Now abandoning all caution, Darnoth kicked the door open. On the other side they found three huge hobgoblins clustered around a document covered table. One was dressed in fine ceremonial armour, a plumbed helmet and rich red cape; obviously a hobgoblin of some importance. Again the party fell on the creatures, and while these proved to be much tougher opponents, they too soon lay motionless on the floor. But not before the leader was able to call out the alarm. Riley stood watch at the door  while Darnorth severed the commanders head, plumbed helmet and all. Kern and Erijay ransacked the room, taking papers, a potion, and discovering a great locked chest. Using a key from the dead hobgoblin commander, Kern opened it to find a glittering pile of gold and jewelry. Although sorely tempted to load up on treasure, the party choose to take just the easily portable jewelry and a few coins for now so they would not be slowed down on their continuing raid on the hobgoblin fortress.

Relocking the chest, they continued north along the corridor, discovering an abandoned guard post. Just as they were about to head east again, another rain of arrows hit them from that direction and they saw yet another large squad of hobgoblins in battle formation ready to block their way.  Darnorth, yelling “Look at your leader now!” flung the dead hobgoblin commanders’ head into their midst. This unnerved the usually iron disciplined hobgoblins, who hesitated just long enough for Erijay to drop them all with a sleep spell. After slitting throats and collecting the head, they party decided it was about time to head back, as Slate should be just about ready to blow the cave entrance.  Stopping to first try forcing a locked door bypassed earlier, they were against surprised by a hobgoblin band, this time with a trained mountain lion. There ensued the longest battle of the raid as it took forever for the party to drop just a handful of hobgoblins and one cat.  By now the day was late, and they hurried back out of the cave (after first loading up on gold from the treasure chest in the commander room) and had Slate blow the entrance. Which to everyone relief actually worked!)

Rather than go back to town, they decided to stay on site so Slate and his crew could finish off the secret tunnel over the next two days. The first day nearly ended that job, as a huge warband of 50 or more orcs was observed advancing up the valley towards them. Kern first climbed up the rock face over the cave, then used rope to start helping everyone up in the inaccessible location, while Darnorth tried to charm the orcs into leaving them alone.  That proved unsuccessful, so Erijay tired her charm on the orc leader. That was likewise unsuccessful, and instead enraged the warband , who then proceeded to  attack. As the dwarf miners hid in the rocks, Erijay again dropped many of the attackers with a sleep spell, while the rest of the party and the mercenaries returned the orcs’ missile fire. Much of the party’s fire was aimed at the orc leader, who was slain almost immediately. This was enough for the warband, obviously looking for easier prey, and so they gathered their fallen and sleeping comrades and fled the valley. 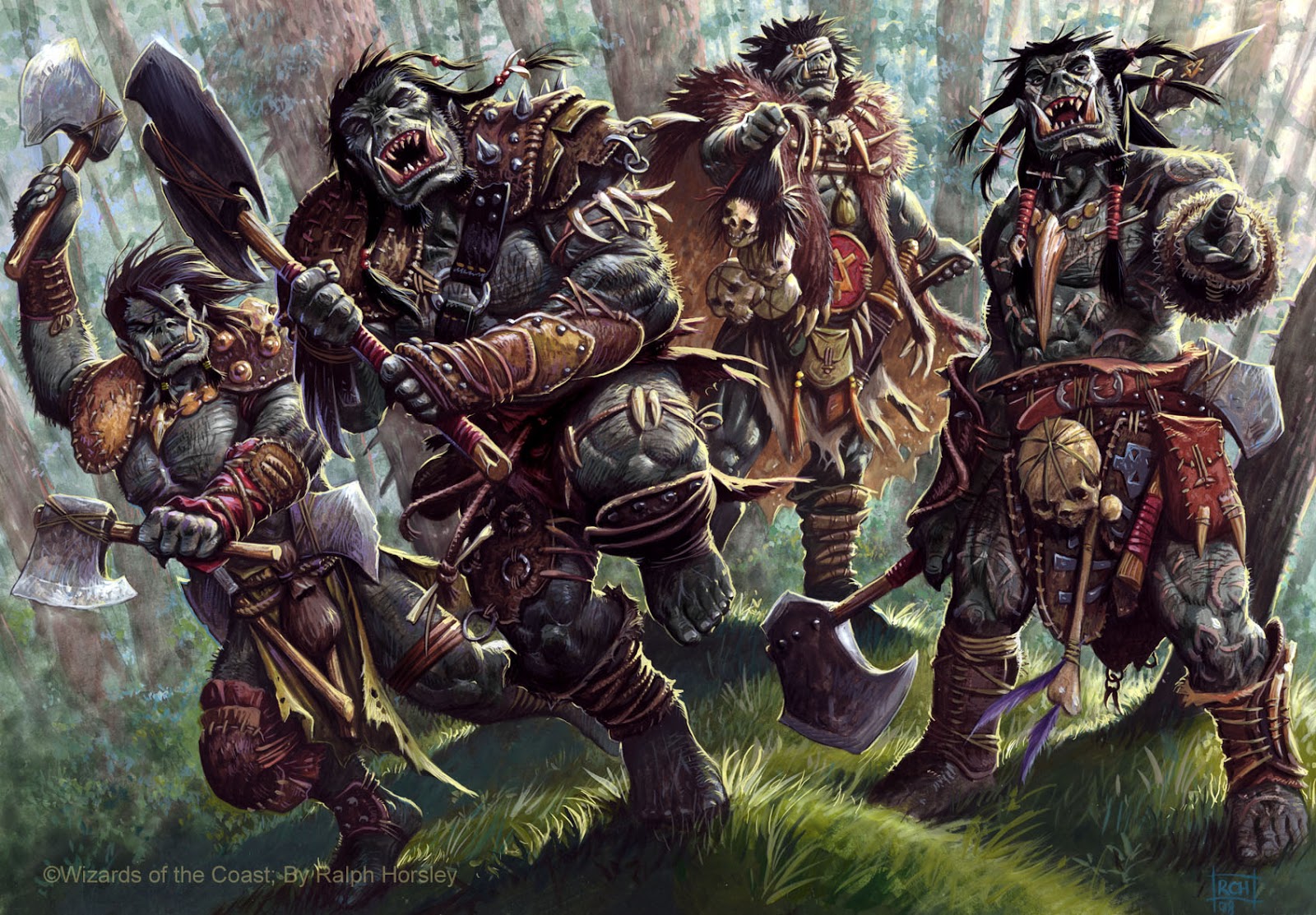 The remainder of the day and night were uneventful, but around noon the next day there was a other close call when a high flying wyvern spotted the activity on the mountainside and swooped low to investigate. As the monster started to circle in closer, Darnorth started shouted a string of dwarven profanity at the monster. This apparently spooked it enough to likewise send it elsewhere looking for prey. 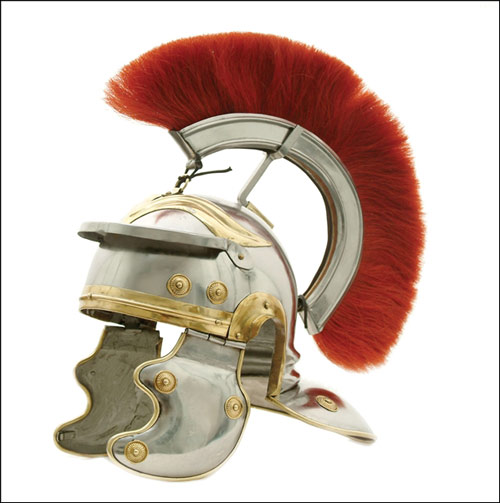 With the secret entrance now finished, all head back again to Westmist. There, the mercenaries and dwarves were released from service, and everyone else headed to visit Synthini to see what magical treasure they may have found. The helm, which Darnorth had kept after leaving the hobgoblins commanders head behind, proved to be a helm of comprehend language.  The potion found by Erijay was a potion of giant strength.  And then began the planning for the next raid into the dungeon to recover the rest of that treasure.
Posted by ChrisS at 9:35 PM