Westmist Session #15 - I Love it When a Plan Comes Together

Turning their backs on Stonehell, the next order of business for the party was to deal again with the smugglers running arms downriver. In the week leading up to the next new moon, the six (Kern, Turrick, Eazam, Darnorth, Riley and Erijay) started to pull together the pieces of their plan. An audience with the Lord Merdwyn was arranged to get both his OK to go ahead with an attack from the bridge, and to negotiate some assistance. The smooth talking Darnorth received both permission and the promise of a half dozen men-at-arms. The party also touched base with the Masked Council to secure their support, and negotiated to hire Gundar should they need help crewing and manning a boat. Finally, Erijay was sent off to get red hair dye so she could, if necessary, disguise herself as the magician Alia.

Alas, their plans were thrown into disarray when a few days before the new moon, a fleet of boats flying the royal banner of Kellowai arrived in town. These anchored in midstream, and landed a noblewomen to speak with the March Baron. The party starting digging for rumors, finding out that such a visit was unusual, as was the stated purpose (to resupply the Citadel of Amrath).Their investigation was interrupted when the beggar Rikar, previously befriended by Turrick, arrived to breathlessly tell them that the March Baron had ordered the party’s arrest and his men were spreading out across town to find them all. The group quickly decided the best place for them in the circumstances was out of town, so Rikar led them to an area where several buildings were built against the town walls. As Darnorth with his magic boots helped the party clamber over the wall, the guards in an adjacent tower challenged them and opened fire. They were quickly silenced by Erijay’s sleep spell. Kern left a handful of coin and Sweet Jenny in the beggars care, and arranged to meet him on the Commons outside the town walls the next day to get more news.

The group hid in the marsh, and watched as parties of the March Baron’s horsemen fanned out to the north and east searching for them. They also noted a party of riders heading up the old Stonehell road towards the dungeon, a party that did not return before dark as did the others. Next day Kern made his way to the Commons to meet Rikar.  He learned from the beggar that King’s envoy, Lady Glendril, had convinced the March Baron that the party had fabricated the whole hobgoblin story to discredit him,  so they could usurp his baronial seat and replace him with the axe wielding Erijay.   He also learned that the Baron’s men had ransacked their new house, and hauled away the bedridden hench-elf Elineel to the dungeons beneath his keep. Obviously unable to return to Westmist right now, they decided to head downriver to intercept the smugglers, a modification of their original plan. Stopping at the old smugglers camp, they found it still deserted and unused since their last visit. The party set an ambush around it, while Kern hid by the river to watch for boats. No smugglers appeared, but late in the evening, the royal flotilla passed by and disappeared into the evening mist.

The party continued their watch overnight with no result, before boarding their boat and heading downriver through the morning mist. Before too long, however, they emerged from the mist only to find the royal flotilla at anchor just 60 yards ahead. Quickly back paddling, they tried to evade, but were spotted and one of the vessels pulled anchor to pursue. With more rowers, the royal ship caught up and the men-at-arms aboard opened fire once the party came within visual range. They were supported by a great warrior plate mail and what appeared to be Lady Glendril, casting spells. While half the party continued to pull for shore, Erijay dropped a sleep spell on their pursuers, knocking out many of the men at arms and several rowers. Eazam used his rope of climbing, and Turrick his net, to try ensnaring the Lady, but to no avail. In the meantime, she spoke the magic word ‘tella’, dumping the party into waist deep water as their boat turned back to a box, and proving they in fact faced the magician Alia. While Kern tried to grab the box, one of the rowers ensnared it in a net and began to pull it towards his own boat. The rest of the party traded missile fire with the enemy, except Riley who successfully cast silence on Alia, neutralizing that threat. The fight turned in the parties favor when Eazam was finally successful in ensnaring Alia in his rope.  Kern, meanwhile, waited until their magic box/boat was almost onboard the enemy vessel before speaking the work ‘spaz’, returning the boat to full size and in the process crushing the enemy boat and dumping everyone onboard into the water. While Eazam pulled the bound magician to shore, the rest of the party use missile fire to pick off those crew who had not yet been pulled under by the weight of their armor. 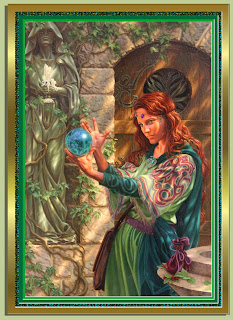 The other vessels were now approaching, so the party ran into the mists to hide from the search parties. These gave up by nightfall, and when they checked in the morning, all sign of the rest of the fleet was gone, with just the debris and bodies from the previous day’s battle remaining. Kern dove into the water to recover the body of the drowned plate mailed warrior, dragging it back to camp. They stripped both the body and Alia of valuables, and cast Detect Magic to discover three magical potion vials. Then, Erijay successfully cast Charm Person on Alia, and the party proceeded to learn all she knew about the smuggling operation. As a river smuggler, she had been hired in the city of Kingsford to run arms and supplies down the rivers to the hobgoblins at the ruins of Narmor. She didn’t know who was doing the hiring, having dealt only with middlemen, but it was obviously someone of influence and wealth. She also knew there was someone in Westmist involved, but again did not know his/her identity. She had lead about 7-8 runs downriver, filling several warehouses below the ruined castle (serving as the hobgoblins headquarters) on the island portion of Narmor. After each run, she and her men would row the Folding Boat back to the east bank of the Great River, then proceed overland to Kingsford to arrange another trip.  As far as she knew, the hobgoblins were planning an invasion of the Kingdom of Kellowai, starting with Westmist. She had no idea when the attack was coming, but did say this was her last trip downriver. The party was left to ponder these revelations and plan their next course of action.
Posted by ChrisS at 6:09 PM