Having now learned more about the smugglers and the hobgoblins from the charmed Alia, the party (Erijay, Riley, Darnorth, Turrick, and Kern) had to decide how that information could be best put to their advantage i.e. get the arrest warrant lifted. Alia in tow, the head back upriver to Westmist, using the cover of darkness to make their way to the woods east of town. The next morning, Kern made his way to the Commons to meet Rikar. The beggar, true to his word, was there at the crack of dawn with Sweet Jenny in tow. From him, Kern learned that they were still being hunted and the March Baron had the town in an uproar. Kern then passed a note for delivery to Bazzrel the Flying Mage, in which the group asked the mage to meet them at the old prison pens east of town. This apparently piqued Bazzrel's curiosity, as he did indeed met the party. He first informed the party that Lord Merdwyn had seemingly come to his senses that morning. It would appear he had been under the influence of a charm spell from the Lady Glendril/Alia, who had weaved lies and turned him against the party. That said, Bazzrel then  listened to what the party and the charmed Alia had to say. He indicated he was inclined to believe the story, but warned that the March Baron may not, being especially suspicious after the events of the last few days. Just the same, Bazzrel agreed to try arranging a quiet meeting between the party and the March Baron on the next day. 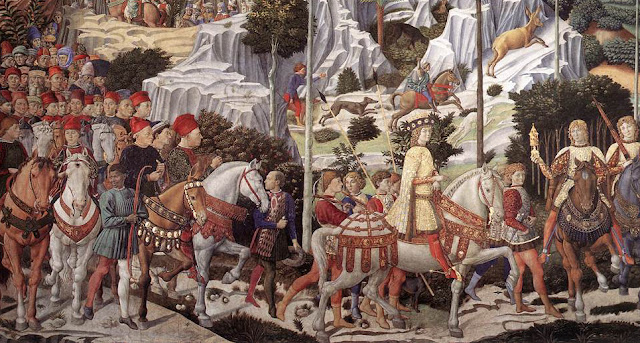 Next day at the agreed time, the party observed a mass of riders leaving town and heading towards them. It was made up of the March Baron and several squadrons  of his men,  Liphanes of the Highest Virtue and his own clerical retinue, all lead by the Flying Mage.  Confronting the party and the still charmed Alia, the March Baron demanded they tell their story one more time. This they did, at which point the  corpulent Highest Virtue rode forward and raised a peon to the god Velas, asking if the story was true and if all were speaking in good faith. To the party's relief, a resounding YES was heard. Now exonerated (and having both house and hench-elf returned), they discussed with the March Baron the next course of action.  He would have to focus on preparing his defenses and sending east for reinforcements and aid from the King, but asked that the party try to find more information on the hobgoblins. Particularly how many there were, and when the attack was expected. Discussing options, they chose to start back in Stonehell, where Alia had told them one wing of the attack was being marshaled.  Leaving the redhead magician at the March Baron's mercy, Kern gave her a quick shove as they party moved out, breaking the charm and earning a look of pure evil and hatred in return.

Back in Stonehell (with Sweet Jenny and three new war dogs in tow) , the party first encountered a group of kobold caretakers, whom they questioned about the hobgoblins. From the little dogmen, they learned the hobgoblins were found on the second level, below the kobold market. They also learned that apart from the main entrance near the market, the next access closest to the hobgoblin lair was found in the crypts to the east.  In the hopes of sneaking up on the hobgoblins, the party chose to brave the crypts again, but not before searching out Korag and his Wolf Gang goblins to try enticing them to help. While Korag was pleased to see them, he was not willing to risk his tribe against the hobgoblins, especially since he didn't quite trust the party.

Rebuffed, the party head back to the undead halls, turning south in their search for the stairs going down. Along the way, they pillaged a number of crypts, and battled the rats and zombies they disturbed. Turrick was bitten by one particularly vicious rat, and began to feel a little ill as a result.  In another spot, a mass of zombies burst from the crypts to confront the party. The zombie hoard was dealt with using a combination of flaming oil and arrows, while their advance was blocked the sword and axe (and dogs) of Turrick and Erijay. In yet another crypt, a strange creature, formed of a swirling asymmetric collection of human bones, animated and attacked with a flurry of fists before falling to the party's blades.  Here, they recovered a trove of silver coins and jewelry. At this point, they elected to return to town rather than push forward, particularly since Turrick was beginning to feel the effects of his earlier rat bite. 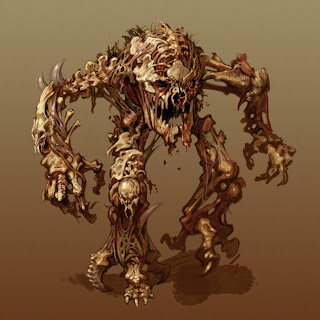 Back in town, Turrick visited Duran the Physician to have his rat fever treated. After a week of bed rest, he joined Kern for a night on the town, during which they both tried hitting on the same mysterious and androgynous stranger who had been the object of Erijay's advances some weeks earlier. And again, both were lucky to escape still clad in their own skin. Were that not enough, Kern on the rebound somehow ended up at the altar with a different young woman, only to leave her jilted when he sobered up enough to realize what he was doing. Needless to say, the lady was not impressed. 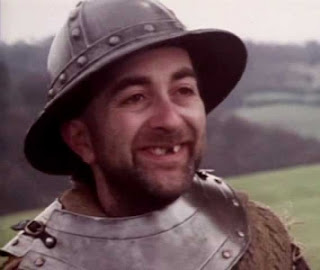 On a final note, the loyal Rikar was hired to guard and look after party's house in their absence, and generally serve as 'man about the house'.
Posted by ChrisS at 3:23 PM