Having spent several excursions exploring the third level of Stonehell with no (financial) reward to show, the party’s thoughts turned to other ventures. In particular, to the rumors of the Rod of Narissa. So rather than delve once more into the dark depths, they chose to wait around town until they heard back from Thuridici the Sage. And after another week and a half, they were summoned into the presence of the learned man. Thuridici confirmed that the legend of Narissa was indeed true, and the details the party had been told by the Undervirtue matched well with the information he had recovered from his tomes of lore. What he could not tell them was exactly the location of the final battle between Narissa and Raxeses the elementalist lich. It occurred in one of the long forgotten mining villages that once dotted the flanks of the Western War Peaks in the days of the Third Imperium.  He was, however, able to provide a map showing the location of those villages. With that, they party loaded up on supplies for a wilderness journey in the dead of winter, and departed Westmist to explore between the western mountain front and the Great River. And an expedition it was, with Riley (and Guruk the beastmaster), Kern (and Beorn the Twice Cursed and Sweet Jenny), Eirjay (and Foxy the wardog) and Darnoth.

The first day passed uneventfully, with the party starting on the road to Stonehell before veering off into the foothills going west. The second day likewise went well, until just before noon Guruk grunted the party to a halt with the warning “orcs!”. The party scattered into the brush just as a war band of about 40 orcs marched into view. These halted when they saw the party’s footprints in the snow, and a band of the creatures split off from the main group and followed the party’s path into the woods. They didn’t get far, however, before Erijay and Beorn dropped most of them with a pair of sleep spells. When the rest of the party released a barrage of missiles, the main body of orcs retreated up the trail, leaving a picket line of archers to snip at the party as they proceeded to make the sleeping orc’s rest a permanent matter. That done, Kern and Guruk slipped through the woods to outflank the picket, while Erijay Darnorth and Riley engaged from the front. After taking out 3 of the orcs, the rest turned tail and ran back to the main body, which in turn decided retreat was the best option.  Which the party let them do, taking time to loot the bodies of the fallen before cautiously moving forward again, keeping an eye out for any orcish ambushes. 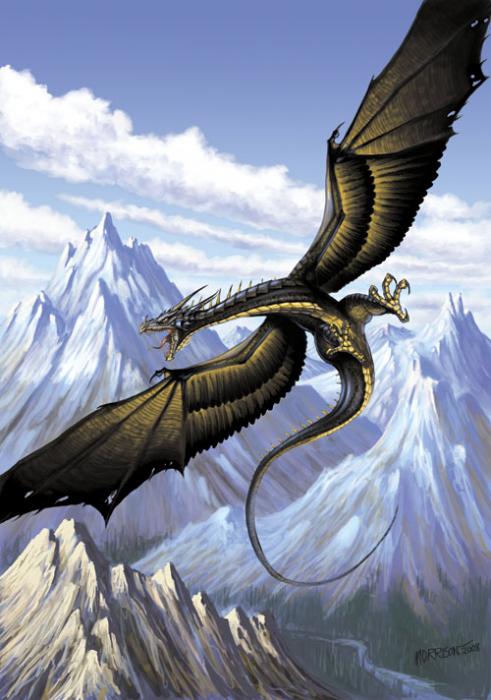 After another night camping in the cold, Kern’s early morning watch was interrupted by a pair of flying creatures, attracted to the camp by the smoke of the campfire. As they got closer, the bat-like wings and tail stinger showed the creatures to be wyverns. While Kern frantically awoke the rest of the party who then fled into the woods, the two descended on poor Sweet Jenny, who was soon torn to pieces by the ravenous beasts. Luckily, that was enough to satiate them, as once done with the mule’s carcass, the two wyverns lifted off again to fly back into the mountains.

With heavy hearts, the party redistributed the mule’s load of supplies and headed out again, finally reaching the ruins of the first village on the mountain slopes ahead just as light started to fade. Most of the village consisted of ruined stone walls, but three building had been rudely rebuilt and smoke poured from the chimneys. While the prospect of shelter for the night was tempting, the party’s elected to ere on the side of paranoia and camp away from the village. Just before first light, Beorn and Kern crept forward to the building, hearing snores and horses inside. With no windows visible, they were unable to see who was inside, but that question was shortly answered when a half dozen scruffy men emerged to relieve themselves in the snow.  At that, the rest of the party emerged from hiding to confront the men, who quickly grabbed what weapons they had and called into the cabin for “Janus”. There emerged a tall man, armed and armored, and who appeared to be the men’s leader. The tense conversation that followed revealed little except that the men were probably bandits, were wary of the parties intentions, and that the two wyverns (which the bandits called Friz and Fritz) had a taste for horsemeat. With nerves on edge and hands on weapons, the party elected to leave, but not before Riley called on Habuu to locate the Rod of Narissa. Which was not to be found in this particular village.

Moving out again, the party explored another ruined village (this one deserted) before approaching a third later in the afternoon. Here they were greeted by the sight of a ruined watchtower at the edge of what looked like a hanging valley. Yet again, Kern and Guruk moved forward to examine the tower, noting a path beat through the snow. Looking into the tower, they saw little but a nest or bed of furs and boughs, a sand drift and a set of old wooden stairs.  They also noted that the area around the tower was a sandpit, and a tunnel headed into the darkness at the north end. Calling up the rest, the party proceeded to rifle through the tower looking for any items of interest while Darnorth levitated up the stairs to keep watch for anyone approaching. Which he soon did, as a large humanoid shape came into sight and started up the trail into the valley. The party hid inside the tower and set an ambush for the creature, who proved to be a 12’ tall giant, all wrapped in furs. As he approached the tower, Erijay entangled him in a web, while the rest of the party pelted him with missile fire and then engaged in hand to hand combat. While the giant struggled to break free of the web, he started to cry out “No!, stop hurt Booh. Booh be nice to little people!”. Stopping their attacks, the party started to question the subdued Booh. From him they found out that “little crunchy men” had dug the tower out of the sand, and dug the tunnel the party could see on the opposite side of the pit. Booh hadn’t seen them for some time, not since he had a few for a snack back when the giant discovered the tower and decided to move in. While the party was unable to squeeze any treasure out of the giant, they were able to entice him with an offer of all the horse he could eat if Booh would help them tackle the bandits in the other village. But first Booh needed to rest and heal, so Riley cured the giant, and Booh then crawled off to bed and rest for awhile. 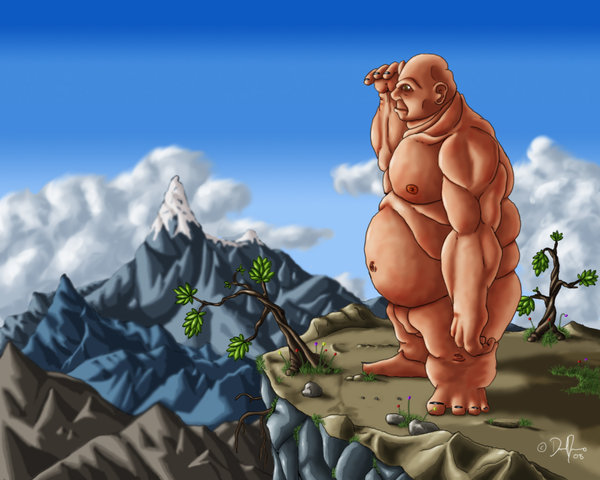 With the bandit raid on hold for now, the party elected to explore the sand tunnel. They found a roughly 8’ high and wide passage, generously supported with timber frames and pit props.  After advancing awhile, they were surprised to find the wall of a half timber house along the side of the tunnel. Darnorth and Riley tried to carefully pry the boards off of a window, at which point they heard voices (speaking gnomish) inside and a bustle of movement, shouting and babies crying as the occupants prepared for whatever was in the tunnel.  Rather than chance opening the door right now, Kern slipped forward again, to find another half timber house and a larger chamber. From this house burst a half dozen gnomes, and the leader of the group demanded to know who the party were and what they were doing in the gnomes’ tunnels. A surly conversation ensued, and when the gnomes asked the parties business once more, Riley lost it and charged at them, a war whoop to Habuu on his lips. Simultaneously, the gnome leader started casting a spell and a sand wall appeared before the cleric. It proved illusionary, however, and Riley burst through and laid one gnome out cold on the ground, his head caved in by the cleric’s mace.  Reluctantly, the rest of the party prepared to assist the priest, but a sleep spell from Erijay and the flat of Darnorth’s sword made it a less bloody encounter than most.