Before delving back into Stonehell, the party decided to track down information onthe Rod of Narissa. Asking around, they were directed to the home of Thuridici the Sage. Having discussed their needs with the learned man, he agreed to take on the job of tracking down the likely location of the Rod.

Crossing the town square after meeting the sage, the party observed a company of the March Baron’s mercenaries at drill. As they passed by, one of the men in the ranks make eye contact with Erijay, and proceeded to draw a strange snake symbol in the air. Leaping to the elf maid’s defense, the redoubtable Riley grabbed the man with a mail clad grip and started to question the fellow. When the rest of the company began to draw weapons, the mercenary’s commander (Captain Jackson) intervened and none too kindly confronted the party. After some angry words and shoving, the man-at-arms apologized, saying only that he thought he recognized the sword Erijay carried and meant no disrespect. Walking away before blows were traded, the party was none the less intrigued by the man’s actions and comments, and arranged to have Riker track him down later and arrange a meeting.  That evening, Erijay and Riley made their way to the Foam and Whistle tavern where they found the man drinking with his mates. Discreetly separating him from his friends, Erijay and Riley began to question the mercenary. The swarthy man, Bithaboon by name, said he came from the far southern jungles where the tribes worshiped the dread serpent Yg. And he recognized the sword the elf carried as an artifact of that cult. Bluffing, the two convinced Btihaboon that they were secretly members of the cult, and pumped him for information (particularly about the Cobra Codex). He was not able to provide much new information, but did confirm a lot of what they already knew, including the fact that there was a second shrine of Yg in Stonehell. 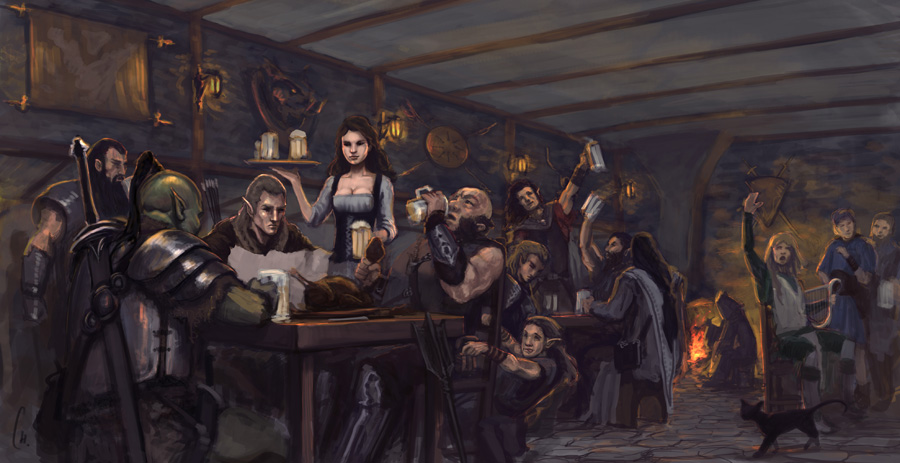 Back to Stonehell the next day, Darnorth, Riley, Erijay (with Foxy) and Kern (with Norm and Sweet Jenny) headed for the old hobgoblin fortress to find the stairs going down they had been informed of on their previous expedition.   These they quickly found, but not before an unfortunate incident involving kobolds, bearer beetles and a sleep spell. After waking the kobolds and smoothing some ruffled scales, the party did learn the kobolds were headed to level four with a load of ‘fresh’ bodies for the Gentleman Ghouls. But the upset little humanoids weren’t really interest in much talk given their treatment, and soon headed down the stairs and away from the party.  The party followed shortly, finding themselves in a room with a pool and a large iron cube stuck on end in the middle. After fooling around a bit with it, they explored a few other rooms. Highlights included one with a cantilevered floor that could be turned on its axis, another rune covered obelisk like the one on the second level, and a set of stairs going down. They also discovered a room eerily lined with about two dozen statues, several of which showed expressions of extreme terror. Passing warily through, they next encountered a door covered with outward protruding spikes. As they examined the door and hallway, it suddenly started to open, and a huge ogre emerged. Reacting quickly, swords were drawn and blood flowed, but the ogre retreated through the door with a howl and slammed it shut and locked it despite the party’s best efforts. Inside, the party could now here two voices calling out to each other (“Rufus!”, “Tusk!”, “tell mistress!”). They first tried mollifying the ogres, but that didn’t seem to work. After fiddling with the door (and setting off some spikes in the process), they were able to force it open. On the other side they found an opulently furnished sitting room. Fine rugs covered the floor, ornate furniture lined the walls, and a silk dressing screen covered  the north wall. But there were no ogres. 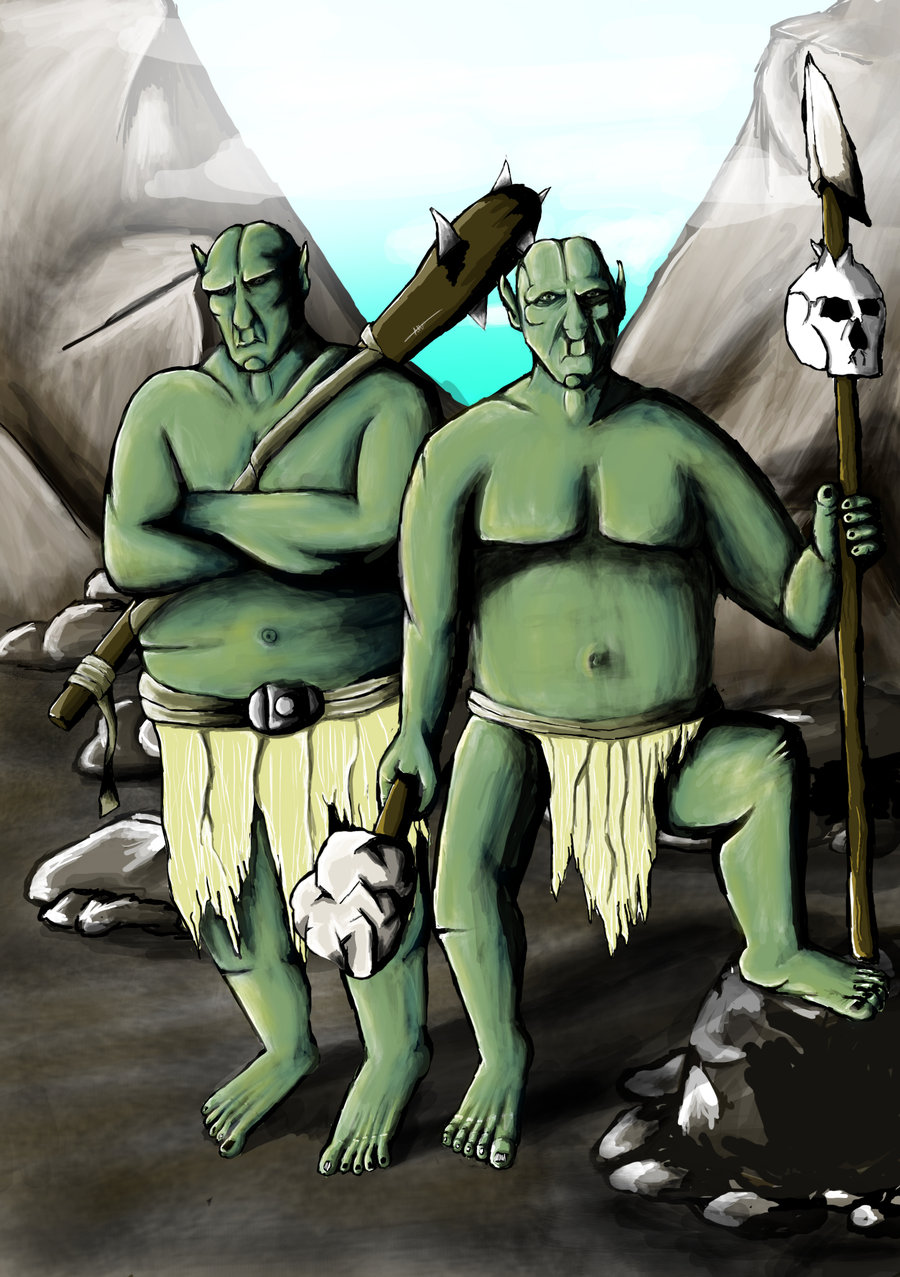 Searching further, the party found a storeroom with foodstuffs (and a cage full of giant rats). At the next door, Kern heard someone on the other side. Assuming the room was occupied by the ogres and their ‘mistress’, they tried parley again. After some persuasion, a cultured woman’s voice told them to go back to the audience room and await her presence. The party obeyed, and spent an hour cooling their heels. Then, the door hidden behind the silk screen opened, and the two ogres emerged (incidentally blocking the mirror set up to observe whoever or whatever came out of the room). Hidden behind the screen, a quite female voice informed them her name was Lachesis and that she dealt in information about the inhabitants of Stonehell. And she then related precise knowledge of everything the party had done in the dungeon over the last 8 months. Somewhat unnerved, the party starting asking questions, only to be met with the response that ‘knowledge is gold’. They did convince Lachesis to take the cold stone for her larder, and squeezed a little information out of her regarding the shine of Yg and the Cobra Codex on the fifth level. Cannily, Kern asked what the party could do for her. At that, she stepped out from behind the screen. They observed a slim female figure, clothed in fine but dated gowns, with head and face covered in a veil. She softly informed them she would much like to have information on the wererats that inhabited part of this level, and who were somewhat rivals of hers. Riley tried to clarify if she wanted information on her rivals or elimination of her rivals, but she was much too coy to answer that directly. Riley then offered to cure Rufus of the wounds they had inadvertently inflicted on him, after which the two blind ogres escorted the party out of the chamber and back to the corridor outside the spiked door. 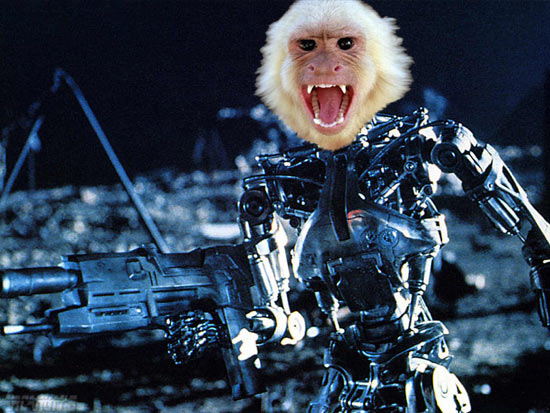 Back to exploring, the party again approached a set of door they had earlier found. These particular doors were locked, but the wily Kern could find no mechanical lock to open. Instead, Erijay used her knock spell to open them.  Unfortunately, the doors closed and locked behind the party, despite their best spiking efforts.  Confident they could still get out (since Erijay still had a knock spell memorized), they pushed on and encountered a band of bugbears in the next room. A short sleep and melee session followed, and the bugbears were soon dead. Finding nothing of interest in the room the bugbears were trashing, the party passed into the next room to find one of the odder sights seen thus a far in the dungeon. A half dozen baboons, composed half of gangrenous flesh and half of mechanical bits and hoses filled with a glowing green liquid.  Each had one hand replaced by a serrated blade, and their jaws were of metal. Not particularly interested in tangling with these creatures, the party tried to avoid them. But the things were in no mood to allow the intruders to leave, and they moved to attack. The party soon found that in addition to biting or slashing with their blades, the odd creatures could pair up and shoot lightning bolts as well. They were shortly all slain, however, with the tried and true combination of another Erijay sleep spell and slashing/smashing by the rest of the party. Puzzled and unnerved by the odd events of the last few hours, the party elected the head back to Westmist to rest and reequip for another day.
Posted by ChrisS at 8:58 PM