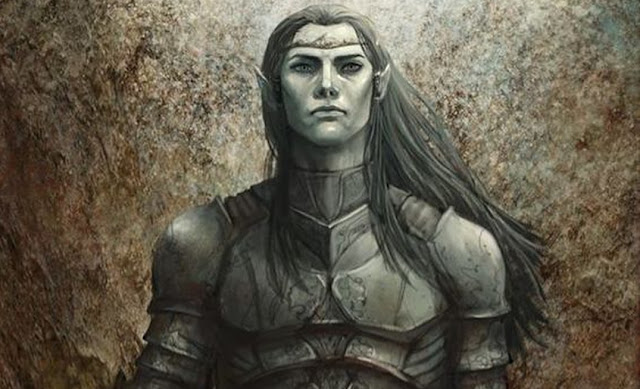 Rousing the 'guards', the party themselves settled down for the day to catch up on their rest. When evening began to fall, they roused themselves and prepared to re-enter the  manor and continue the search for the paintings. Thrax, Vergarious and Jonesomon were reluctant to return so quickly, and opted to stay at the encampment. Worried about having an under-strength party, Ranza made an offer to the guards; a half share of any treasure from this entry into the manor if they would come along to help. Agnar was adamant he would go nowhere near the &%$@*& cursed place; but Beck signed on for gold and glory.

When night fell, the manor returned as before. This time the party started with the outbuilding they'd previously bypassed. It proved to be a stable (faintly lit within) and what looked to be the grooms quarters. They found little in the quarters; it was sparsely furnished and equip, and obviously unoccupied for quite some time based on the cobwebs and dust. However, in the stable itself they could hear animals. Entering, they observed, by the light of a lantern by the door, three animals. A pair of well fed and well kept ponies in one stall, and a magnificent blue-black horse in another. The stable was otherwise empty except for straw, tack and harness. And very well looked after, considering there appeared to be no stable boy. Gnarl went over to the horse and offered a handful of dried apples from his rations. The horse licked these, an Gnarl was surprised to find it left a sheen of frost on his hand from it's unnaturally cold breath. He also noted the very finely crafted tack and harness hanging nearby; this was obviously the horse of a very well-to-do individual.

This got Hobbs all excited, and he scurried over to their camp to grab the saddle of  domestication. With Gnarls help, he got this on the horse and climbed up into the saddle. The horse was quite OK with this, and the hedgefey gently rode his mount out of the stall and then out through the stable doors. Where he was immediately confronted by a tall, slim figure dressed in mail and helm, and with a sword in its hand. Hobbs immediately got the whiff of fey from the figure, who now drew a dagger that burst into flames with his other hand, and then spoke; "I think it best if you leave my horse and go on your way". At which point, Hobbs drew his own sword and charged, Ranza, Gnarl and Beck following up in support. Things went downhill rapidly; Gnarl entangled the figure, but it swallowed a potion and broke the hold. The figure then colorsprayed the three on foot and knocked them unconscious. Then it became a battle royale between he and Hobbs, who called on his badger heritage to go into a heroic rage and charged at the figure multiple  times, landing multiple blows. The figure fought back with spells and sword, effectively fighting to a draw. The figure then took the opportunity during a pause in the action to go stand over Ranza and press the tip of his sword against the back of her neck. "I suggest you lay down your weapons and return my mount, or your companion dies". He press a little harder with the sword, drawing blood, to reinforce his point.

Hobbs, seeing no other way out, complied. The horse returned on it's own to the stable (after Hobbs removed the saddle of course; it wasn't part of the deal) just as the other three regained consciousness. The figure, with great dignity and respect, now bowed to Hobbs. Congratulating the hedgefey on his fighting skill, he introduced himself as Diamur Without Peer, a lord of the twilight realm. Would Hobbs and his companions join him for a drink in his rooms? He wished to learn more about them and their purpose here at Vernal Manor. The party agree, and Diamur Without Peer led them around the manor to the main doors, then upstairs and through an empty (except for four large bat eared goblins sitting at a table) ballroom, to his own well appointed chambers. Pouring them each a glass of some strange green wine, they sat down to talk. Over the course of the conversation, the party learned some interesting information:
Digesting and discussing all of this, the party and Diamur Without Peer came to an understanding. He would find a way to get Lady Lhiannan away from Cuthbin for awhile, and the party would then sprint him away and back to the mortal realm along with, if at all possible, the paintings they sought. In return, apart from whatever artwork they could get away with, Diamur Without Peer offered them his friendship and alliance in times of need (sealing the pledge with a strange teardrop shaped amulet on a gold chain). It was agreed the party would return the next night to put then plan in action.

Meanwhile, they went to look for Granya to get information from her. And so Ranza could size her up, as the plan they were hatching involved the party changling disguising herself as the maid servant. They returned to the kitchen to wait for her. Granya arrived some time later, looking disheveled and tired, carrying an overloaded tray of dirty dishes, bottles, and glassware. Startled by the party's presence, she dropped the tray with a crash. As Gnarl gallantly helped her clean up, he struck up a conversation. Granya confirm what Diamur without Peer had told them. She did most of the scutwork around the manor, helped only by two killmoulis (she pointed to the rafters where two odd looking little fae with long noses peered down at them). It was a busy job, as there were always guests; people came and went continuously, and they had free run of most of the house except for the Lady Vernal's chambers. Asked why she stayed, Granya laughed and showed them a silver thread around her waist. She was bound to the manor, and could only leave if the thread was cut by the silver scissors kept in Lady Vernal's chambers. When asked, Granya was reluctant to help the party too directly, as she  feared Lady Lhiannan. But she would help as best she could if they agreed to get the scissors, cut her free, and take her back to the  mortal realms.

By this time, Granya had to gather another round of food and drink for the guests and then left the kitchen. As the party prepared to head into the cellar and ensure the gate would bring them back to the mortal realm again, one of the killmoulis climbed down and lopped over the Gnarl. He patted the wood gnome on the arm and handed him a small leather bag before climbing back up again. Inside were a small handful of silver coins, reward for treating Granya well.

Down to the cellars and the gate, the party was perturbed to find another crysmal emerge from the gate stone. But they fought it only briefly this time, just long enough for Gnarl to entangle it so they could slip past, touch the stone and return the the mortal realm just as the sun was rising.