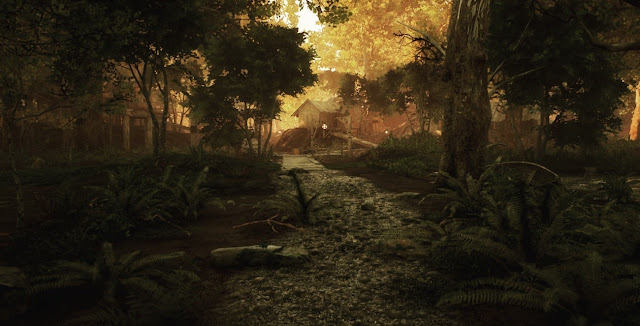 Having spent a week in Brackenrae to rest and refit, the party moved out to start their circuitous tour. To Kreland’s Ford to meet with Thayn Clodwin to seel their painting. Then to the north and the tower/sword from the boys treasure map. And then to Wickerwood to meet the Thorguld Red-Nose and look for information on the lanterna bush. Initially all went well, meeting only the occasional traveler on the road. But on the second day the party was startled when suddenly a huge oak tree crashed down across the path and blocked the way forward.  While Jonesomon and Gnarl stood guard with Feedbag and the cart, everyone else fanned out and started to approach the fallen tree. But then, suddenly from behind came the whine of crossbow bolt arcing through the air. Gnarl, standing atop the wagon was hit several times and tumbled down into cover. Everyone turned to see crossbowman lurking along the edges of the trail behind them, blocking their way back. The party made an about face and started towards them. Thrax, Hobbs, Vergarious and Ranza charged forward, covered by missile fire from the others. But just as they made contact with the crossbowman, a thunderous roar came from fallen tree, where now emerged a huge ogre charging down at Jonesomon and Gnarl.  Jonesomon was knocked unconscious by the beast as he and Gnarl stood alone, everyone else being currently engaged with the crossbowman. A mix of entangle, colorspray and sharp pointy objects neutralized the threat to the rear, and everyone turned to deal with the ogre. Now with the full party focused on the one threat, the ogre soon fell with a cry of “Krugal die!” bellowed from its throat.

Everyone bandaged wounds and then started to strip the bodies of valuables, collecting a bag of silver from Krugal and a scattering of coin from the crossbowmen. They also heaved all the crossbows and bolts into their wagon before turning on the one brigand they’d spared from slaughter. The man refused to tell them anything, snarling back that they party would only kill him anyway so why bother. A little heavy handed interrogation by Thrax and talk of breaking fingers didn’t help. In the end they simply trussed him up so they could bring him to justice in Kreland’s Ford. They chopped off the ogres head at the same time, hoping there may be a bounty available for the bandits. Meanwhile Gnarl and Hobbs slipped into the forest to find the brigands approach trail. This they did easily, and the two followed it about a half mile through the forest before spotting clearing with crude huts ahead.  Hobbs spotted at least a dozen more men, so the two slipped back to inform the group. Rather than tackle (and loot) the camp right now, they decided to continue on to Kreland’s Ford so Jonesomon could recover.

After another day of travel, the party pulled into Kreland’s Ford and settled into the ‘Lazy Unicorn’ Inn for a week of rest. They then paid a visit to the Thayn to see what he would offer for the painting. The party was led into the presence of the Thayn Clodwin, a tall spare man of advanced age. When shown the painting, he was quite shocked. It was, he told them, one of a series of three paintings of rural scenes with hidden fey figures by the famous Cuthbin the Younger. All three had been in the possession of the Vernal family. The problem was, the Thayn himself had helped burn Vernal Manor (and the three paintings) some 50 years before on the order of the (then) Earl Holstan TwoFinger. There’d been rumblings of dark goings on at the Manor, cavorting with dark fey forces and so on, and the Earl wanted to take no changes. He was mystified of how this painting could have survived. But if it had, perhaps the other two were still to be found intact!  He made an offer on the painting (500sp) and informed the party he would gladly buy the other two if they recovered them. Perhaps they should check the burned ruins of Vernal Manor to the west of town [hex 06.09]? He also, upon questioning, told them of barrows in the hills to the north [hex 06.07] and a ruined shrine to old gods in the swamps to the northwest [hex 06.09]. But his demeanor changed quickly when the party started to push back on the price offered for the painting(s). Clodwin in no uncertain terms reminded them he was Thayn and would not be toyed with by little people. If they wished to deal in good faith, he would listen. But he reminded them that pushing too hard would get them nowhere but the gallows. He also made it clear that while he would pay a bounty for the bandits, he was not overly concerned about them and was not interested in sending any of his huscarls with the party to deal with the camp. They could do ask they wished, but he saw no need to involve his men since the threat was already blunted.

Taking leave of the Thayn before things got out of hand (but only after getting their 500sp for the painting), their next thoughts turned to ‘what next’? Diverting from their original plan, they would first go back to assault and loot the brigand camp, then perhaps check out Vernal Manor. Looking for some fired help in the absence of any support from the Thayn, the party went looking for men-at-arms to hire. They ended up at the rather seedy ‘Eight Imps and a Bear’ tavern and succeeded in hiring 3 spearmen and 3 archers [for a full share of recovered treasure between them, or 50sp each if the expedition was a bust treasure-wise]. Ranza also made a big show of saying the expedition would get underway in three days’ time, just in case any of the questionable types in the tavern were in cahoots with the brigands. They party in fact slipped out of town that night, keeping watch behind them for any one sneaking out behind them. Nothing happened though, and the party made their way back to the ambush site without incident or encounter.   The party looped around to the east and prepared to approach at first light with the morning sun behind them.

Jonesomon and Hobbs took the lead, scouting ahead and locating the camp with ease. A pair of sentries stood watch around the path leading into the camp from the south, and another quartet of men soon emerged from one of the huts. But otherwise there was no activity. Hobbs slipped back to tell the rest of the party to get ready, then headed to the hut closest to the forest’s edge and lit a fire. Within a few minutes, smoke was starting to rise. One of the men in the clearing noticed it, and ran over with a shout to warn the men in the hut. And then the party fell upon, with a rain of arrows falling on the men in the open. Few hit though, so the party charged in. Gnarl entangled one group, while Hobbs and Thrax rushed for the sentries. In response to the cry of ‘Ambush!” men started to pour out into the clearing. By this time the party had taken position by huts, and the bandits rushed out into a maelstrom. Their hired archers kept up their fire while the party and the spearmen dove in with melee and magic. Then suddenly, out of the last hut stormed another ogre! It, though, fell quickly to the combined might of Thrax, Gnarl and Vergarious. Seeing their leader fall, the remaining brigands dropped their weapons and gave up the fight.

While the hired men-at-arms (less one archer who fell in battle) gathered the prisoners, the party searched the huts. In the ogre hut, in a hidden hole in the floor they uncovers a treasure of silver coins and jewelry, plus what looked to be two potions. The brigands (dead and prisoners) were likewise looted of their silver, and the party prepared to head back to Kreland’s Ford.