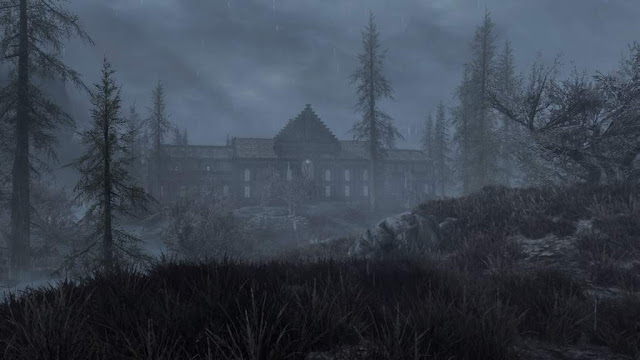 Having cleared out the bandit nest, the party roped up their 5 prisoners and returned to Kreland's Ford, first taking a detour to the satyrs fountain to take the cure and heal their wounds. Reaching the town, the turned four of the prisoners over Thayn Clodwin (who promptly had them hanged on the market green). The party choose to keep one prisoner, a fellow by the name of Cemark. They spared his life and gave him money to cover his bar tab [25sp] at the 'Eight Imps and a Bear' for awhile with the understanding he would report any interesting rumors and gossip he learned. Particularly about bandit activity. They also dismissed three out of five surviving men-at-arms. The other two  (Agnar & Beck) accepted an offer from Ranza to remain on the payroll to help guard camp, Feedbag and the wagon, and other related tasks over the next few weeks  [100sp each, half up front and half at end of employment].

Work done in town, the party packed up and followed the Thayn's directions to the ruins of Vernal Manor just a few miles west of town. They found it easily, but were disappointed there was absolutely nothing of interest. Just an overgrown field. Closer examination and architectural sleuthing by Jonesomon and Hobbs did uncover the barest foundations of a large "U" shaped manor and scattered signs of its destruction 50 years before (burned wood, broken stone, etc). There was one section, partly overlapping with the manor, which was sunk a foot for so lowered the rest. Even closer searching uncovered a strange stone  sticking just and inch or two above the turf; a slick smoky quartz which Gnarl noted was not natural to this area of the Forest. With no other obvious signs, the party started digging around it. It took all day digging down through the tumbled remains of the manor before the base of the stone was found. It was sitting on a packed earth floor, best guess a cellar or other storage room that once sat below the manor. The stone itself was vaguely egg shaped, 15' tall and 20' in diameter. But there were no marking or other signs of what it could be.

By this time it was getting dark so the party started to set up camp for the night. And then they noticed something strange. As darkness fell, there started to appear the faintest hints of a structure over the ruined foundations. At deepest twilight and just before full darkness, there was suddenly an apparently very real and substantial manor standing in the once empty clearing. Leaving Agnar and Beck to watch the camp,the party approached. In several windows light could be seen, although little detail was visible inside through the thick leaded glass. There was a small outbuilding, a shed or stable, nearby as well. And there was a door, which the party now approached. Touching the wall, they confirmed was indeed solid and substantial. And then with Thrax leading the way, they opened the door and headed inside (doubling checking after they did that their campsite and hirelings could still be seen through the open door.)

They found themselves in a substantial kitchen, with a row of cooking hearths along the south wall, tables and counters crowded with pots and pans, dishes and cup, and some prepared food. Thrax tried the dried meats and a bowl of stew and pronounced each quite good. A set of stairs led down to what appeared to be a cellar, but the party first went to check on the other side of a door that seemed to lead deeper into the manor. This opened into a hallway, which contained several other doors. Choosing the nearby double doors, everyone stopped to listen. Hearing nothing, Thrax threw it open. And was surprised to find a loud and lively party underway inside a huge ballroom. Dozens of gaily dressed couples danced to the music of a string quartet and singers, while others mingled among tables overflowing with food and drink. While everyone else peered in from the hallway, Thrax started to make his way to the music, hauling out his harp in the hopes of joining in. But he was intercepted along the way by an unnaturally beautiful elfin woman, who invited him to dance with her. This he did (poorly). He felt a momentary sense of enchantment which passed, somewhat to his dance partners disgust. But that too passed, and she engaged the gangling fighter in conversation. He gleaned that time had no real meaning to her, which  seemed to confirm they were now in the twilight realm of the fey. Upon questioning, she indicated the owner of the manor was her Ladyship, Lhiannan of House Vernal.  By this time Hobbs had moved into the room, and likewise was approached by a dance partner. He brushed her off bruskly while likely forcing back a feeling of enscrollment. The badger continued to be rude, which brought the attention of the rest of the party goers. A dozen men stepped forward and drew rapiers, approaching Hobbs menacingly. Not liking the odds, both Thrax and Hobbs retreated out the door and closed it behind them. But opened it once more to confirm the party was still underway and that it was not simply on a programed 'repeat' of the same scene observed originally.

Done with dancing, they headed for another door further down the hallway. Listening this time revealed the sound of someone mumbling to themselves inside. Once more,the door was flung open. Inside the walls were lined with shelves covered in brick-a-brak (shells, junk glass objects, rocks, etc) Facing the window was a red velour divan on which sat, back to the door, a wizened little man in a red silk robe drinking a cup of tea. Hearing the door open her turned and said “Would you like a cup of tea?” Thrax, once more first in the room, declined, and started to ask him questions. But the little man became more and more insistent that the fighter share a cuppa with him, until finally exploding in rage with a guttural scream. Thrax, choosing caution over valor, retreated from the room and closed the door behind him. Just in time as he heard the sound of the teapot crashing against the door. He was also stunned by the man's growling, standing there in the hallway dumbfounded. Hobbs, his dander up again, pushed forward and launched himself into the room and at the little man. And intercepted a hurled cup of boiling hot tea with his face. But Ranza and Gnarl joined him, leaving Jonesomon to look after Thrax in the hallway, and a short vicious fight ended with the tea man dead. Thrax, now recovered, stripped the robe from him and dumped the body in the fireplace. Upon donning the robe, he noted there was now a pot of good sweet tea (the kind he liked) hidden in an inner pocket. Neet!

Finding nothing else of real value (and no paintings, which was their ultimate purpose in the manor), the party instead took the divan and hauled it out to Agnar and Beck, before returning to the kitchen (where they noted someone or something had cleaned up Thrax's dirty dishes) and heading down to the cellar. There they found it bursting with supplies of food and drink. And after some careful investigation, Ranza found something unusual. One of the supporting pillars was more than twice as wide as the others. And hidden in the side was a small lever. She pulled it, and the face of the pillar opened a crack. Prying it open more uncovered a narrow passage. Forming up in line, Thrax once more led the way and in they went. The passage was short and led into a large, very rough chamber. And there in the centre stood the weird quartz stone they'd dug around earlier that day in the 'mortal' realm. But this time the 'smoke' in the stone appeared to swirl and move, and a very faint light emanated from the surface. And then all of a sudden something, else emerged from the surface. A creature, seemingly made up of a mass of quartz crystals. It  lurched toward Thrax and lashed out with a very hard and sharp crystal 'arm'. The rest of the party crowded in behind the fighter to support him, but their attacker was very difficult to damage given it's solid rock structure. But luckily it managed very few hits on Thrax before Ranza finally struck it a mortal blow, causing the creature to collapse in a spray of rock dust and shattered crystal.

Kicking the debris aside for now, Gnarl went over the the stone and touched it. And suddenly the whole party found themselves standing back in their encampment, looking down at Agnar and Beck curled up asleep on the divan and with the sun just rising to the east ...