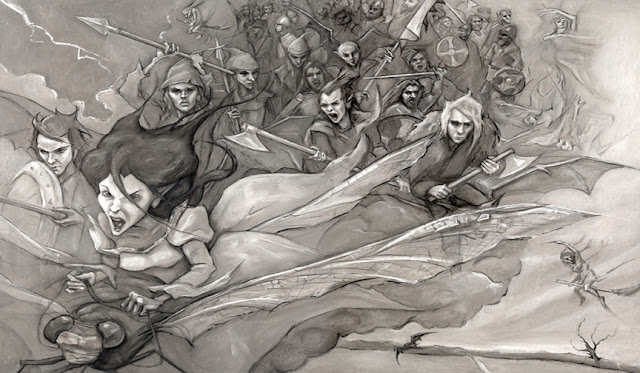 After a day of rest and refit, the party once more awaited twilight's end and the return of Vernal Manor. Making their way to the stable, they  met Diamur Without Peer to discuss the plans for the evening. Dimaur Without Peer would arrange a late dinner with the Lady Lhiannan in her private dining room, in a separate wing from the Lady's chambers.  Then once the meal was well underway, they would get Cuthbin away from the Lady's boudoir, grab the paintings from her private gallery and the scissors with which to free Granya, then flee via the gate stone. Hopefully before the alarm was raised, or at least before any organized pursuit could be arranged. Diamur Without Peer had just one issue to raise regarding the plan; Granya would be busy serving dinner. She could  not help get Cuthbin as her absence would raise the Lady's suspicion. He also warned the party that, while he fully intended to hold up his end of the bargain, if it came to a fight he would raise his sword against them to maintain  his own position with the Lady Lhiannan.

With Granya out of the picture, it fell to the changelings Ranza and Vergarious to use their magic to disguise one as Granya's doppelganger and the other to ensure Cuthbin's compliance via hypnotism. The rest of the party would hide in Dimaur Without Peer's rooms to provide assistance/looting as necessary.  Unfortunately, the plan fell apart almost immediately. Cuthbin, upon answering the door, was initially fooled by Ranza/Granya. But the moment she spoke in a voice NOT Granya's, the artist  suspected all was not right. Vergarious and then Ranza tried to hypnotize him, but Cuthbin shook off the magic and started to become agitated and call for help.  Help arrived not as the artist expected,  in the form of  Gnarl, Hobbs and Jonesomon. They charged into the room and beat Cuthbin into unconsciousness, to both shut him up and hopefully break whatever 'link' he apparently had with Lady Lhiannan. They then piled furniture against the door, and everyone started to ransack the room to find the scissors. Gnarl meanwhile tossed back the potion of true seeing and raced into Cuthbin's room and then the private gallery. He noted a secret door leading into Diamur Without Peer's room, and wedged it shut. He then proceeded to grab the five paintings in the gallery, ignoring the vast number of images of a beautiful woman (presumably Lady Lhiannan)  which lay about Cuthbin's chambers.

Back in the Lady's boudoir, there now came a knock at the door and a high pitched voice. It was  Gyntherium, the atomie chamberlain, demanding to know what was going on. It being apparent to him there was something amiss, within moments he was calling for the buggleburr guards in the upper ballroom. Thankfully, at this point the party found the scissors. Ranza also quickly looted a pair of scrolls and a rug from a chest at the foot of the bed, leaving the not so easily grabbed loose coinage behind. Meeting Gnarl in the next room, they smashed a window and shimmied down a rope to the ground, the still unconscious Cuthbin in tow. Making their way back into the kitchen they hesitated a minute or two. What to do about Granya? But it was soon obvious they could not risk staying to wait for her any longer; the sounds of search and pursuit were drawing near. Wishing to honour their bargain with Granya as much as possible, they gave the scissors to the killomoulis, along with instructions  on how to get back to the mortal realms using the cornerstone gate. Hopefully, Granya could hide the scissors and at some point use them to escape.

With searchers now drawing near, the party made their way with haste to the gate in the cellar.  There they found the crysmal they'd bypassed the night before, sitting there waiting for them. And then a second one emerged from the gate stone; they had two guardians to fight.  They started to battle them, but several hard blows to the party and sounds of searchers in the kitchen above forced them to take a chance. Each pushed past the guardians to touch the stone, but only after Gnarl has used an entangle to slow the crysmal pursuit. Everyone touched the gate, and found themselves once again back in the mortal realm at sunrise. Turning to look at their captive artist, they were not particularly surprised to see him wither away, falling to dust and bone is a matter of moments. It would seem that Cuthbin the Younger's extended years did not extend into the mortal realm.