At first light the next day, Erijay and Kern were surprised to see Darnorth come bumping into camp on horseback. The dwarf had decided, with all the military activity going on about Westmist, to get out of town and follow the pairs trail into the Untamed Lands. Hopefully, the dwarf said, the rest of the party would join them once they were able to get away.  Partly reunited, the party decided to sift through the ruins of Barksis’ Hold for clues and collectables. They remembered Braksis saying something about staying away from the cellars on their last visit, so they immediately went looking for those cellars. A little digging in the charred rubble uncovered stairs down, which the trio descended. The cellar, through smelling of smoke, was still in good shape and filled with crates and barrels. In these they found a mix of food and drink, much more than would be need by an isolated inn such as the Hold. They also found crates with armour and weapons, all in hobgoblin style. That explained a few things. Also uncovered was Braksis’ retirement fund, a pile of coin hidden under a barrel and protected by a blade trap. 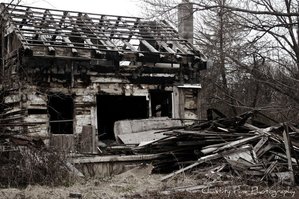 Their curiosity satiated, the three mounted horses and continued west towards the Castle of the Golem. About noon, they were descending into a hollow when they encountered three ogres coming the other way. Both sides eyed each other warily, but when it was obvious the party presented to immediate danger, the lead ogre (Gor) was ready to talk. In broken common, he told them they were out hunting giant flightless birds (a brace of which each ogre carried). They were headed back to their home in the ‘ruins to the south’, but also said they moving out of those ruins to find new homes to the north because the ‘little men like you’ had paid them to leave. That raised three sets of eyebrows. Further questioning narrowed down their home to the ruins of Nasper where the party had scouted before, and the identity of the ‘little men’ as Jax and some of the March Baron’s troops. Before parting ways with the ogres, Kern paid them off with more gold so the brutes wouldn’t reveal that the party had learned from them details about the March Baron’s dealings.

Another couple of hours ride and the party found themselves nearing a small keep on a low rise to the north: the Castle of the Golem. Approaching, they first noticed a bloody mess of slain hobgoblins about a hundred yards from the gate. They looked to have been stomped to death by elephants. Approaching closer, they were now unnerved to see that instead of towers, the gate was flanked by two 20’ tall statues. And then even more unnerved when the statues heads turned to watch them. Cautiously they knocked on the gate, and after a few moments it was opened and they faced an unusual gatekeeper; an exceptionally tall man, ebony skinned, wearing nothing but a bejeweled loincloth, and with eyes with no pupils. Challenged by the man in a sepulchral voice, the party was able to talk themselves into an audience with Zoloren to deliver the mirror of aging.   Led inside, they found themselves waiting in a long hall with steps and a set of double doors at the far end.  After a while, the doors opened and another strange sight emerged. Out came a small frail man in crimson robes, sitting on a levitating ebony throne, which in turn was being pulled by four tattooed Zevistian harem girls in gauzy silks. Flanking all were two ‘guardsmen’ seemingly carved out of bronze or amber. Zoloren greeted the party politely in a voice of dry whisper, and the mirror was turned over to him.  To test it, Zoloren had his guards fetch a hobgoblin prisoner and exposed the unfortunate creature to the mirror with the expected aging effect. Satisfied, the archmage gave the party directions to the wish ring he promised in payment . He said to go north from his castle, and ford the Shinning River. From there strike northeast until three hills were encountered. There under one hill they would find the ring. 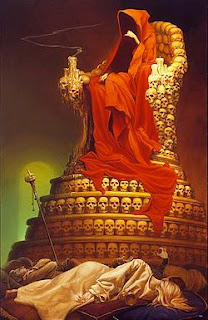 Business complete, Zoloren was about to leave when the party asked a few questions. Brushing aside questions of mundane matters such as hobgoblins and war (“I’ve seen men and nations come and go; I care not for those when I have my own realms and creations here”), he showed some interest in the Iza’ka artifacts the party carried. The cylinder and cube held by Darnorth he identified as some sort of power source. When told of the strange green cylinder they had seen in Mor, he informed them that it could be used to recharge the power cube and cylinder. With that, he impatiently motioned for the three to leave. Taking the hint, they quickly left and climbed back into the saddle to ride north. Making good time, they reached the river and rowed across in Kern’s floating boat and then struck north east. Just as the sun set, they reached the three hills as described by the archmage. Camping for the night, they examined the hills closer the next morning. Each was just about a hundred or so feet high, and on two could be seen some kind of posts or pillars. Climbing the bare hill first, Darnoth noted it was not natural, but seemed to be a man-made mound of dirt. A little digging confirmed this, but revealed little else. Climbing the next hill (this one natural according to the dwarf), they found at the top a large number of statues. These were all weather worn, and were placed in a circle around a central group of figures. They seemed to all be statues of men and women in arms and armor, and one of the figures in the centre had a hand with a ring extended and a crown on his head. Thinking that this might be the ring they sought, Darnorth tried to remove it. But it seemed part of the statue, and it took some chopping with the dwarf’s magical blade to remove. But it proved to be nothing but stone. Pushing the apparently useless statue over (a party tradition), the trio headed for the last hill. 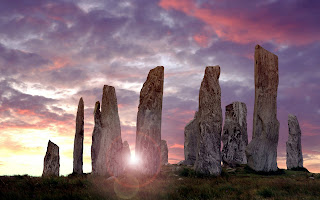 This hill, again a man made mound, was crowned by a circular ring of stone. From the base flowed a small stream, where the party pitched a camp and staked their horses before climbing. Once at the top, they could hear a strange moaning/howling sound as the wind off the nearby mountains whistled between the standing stones. Erijay and Darnorth found the sound eerie, but Kern was absolutely frightened stiff by it. Literally, as the elf and dwarf found the merchant standing completely stiff and immobile. A bit of poking and prodding was followed by a collected shrug as the two decided to explore the stone circle while waiting to see what happened with Kern.  At the base of one stone, Darnorth discovered a narrow spiral tunnel leading down into the bowels of the hill. Finding little else of interest, they returned to find Kern still paralyzed. Hoping the condition would pass with time, the lugged him back down to camp, and Kern shortly returned to normal. So back up the hill they went again, and again Kern was frozen in fear. Back down the hill and a couple of hours wait latter, the wily merchant stuffed wax in his ears and the trio marched back to the top. This time with no issue. Heading to the hole, they tied a rope around Darnorth and the dwarf started to crawl down. And down. And down. Three lengths of rope later, he hit bottom and Erijay and Kern followed him into the dark.

The three found themselves in a rough dirt cavern. There was little to distinguish it, except on closer inspection the walls and floor were embedded with bones, bits of armor and weapons, and other battlefield detritus. Cautiously moving forward, they rounded a corner to find another chamber. This one was completely covered in a red fungus with white puckered protrusions. Three tunnels exited the room, so Darnorth decided to trudge through the growth. This set off a cloud of spores which made the dwarf cough and sputter, but caused no other harm. Rather than risk further exposure, the three brainstormed a plan to make a path. Noting that the spores came from the white protrusions, they decided to use bolts and arrows to set off enough to form a path. 40 missiles later this was done, and they headed for the first exit from the room. After just a few short feet they found their way blocked by a group of giant ants, behind which could be seen a small tunnel. Deciding to avoid conflict at this time, they headed for the next exit and soon found themselves in another chamber similar to the first. Sensing that this was not going to be a simple search, the trio elected to head back to camp to rest and plan a strategy to further explore the caverns on the morrow.
Posted by ChrisS at 8:42 PM