Westmist Session #46 - Under the Hill


During the night, the trio  of Erijay, Kern and Darnorth were surprised to see Riley and Gurruk (and one wolf) ride into camp.  Riley had finally been relived from duty at the temple, leading orisons of victory for the March Baron’s campaign.  Striking out to look for his companions, he also picked up some company along the way, a big burly fighting man by the name of Morg. Morg had recently arrived in Westmist to seek his fortune, on the run from some physical altercation with the circus owner he’d been sold to at a young age. And even someone with much more brawn than brain knew getting out of town would be a good choice to avoid pursuit. Riley had also picked up a pile of healing potions, gratefully received by the battered Kern and Erijay.
When morning came, the expanded group prepared to climb the hill once more. Kern warned the newcomers of the chilling sound at the top, but the three just sniggered behind their hands at the merchants’ fears. Reaching the top, all were able to shrug off the sound. Except Kern who kept the wax in his ears, and Gurruk’s lone wolf who ran off, never to be seen again. Down the tunnel went the six, passing along the cleared path through the fungus to explore deeper into the tunnels. In one side room they found signs of recent digging in the walls. While puzzling at first, the explanation was found in the last chamber, where giant ants were found digging for trinkets and treasure. The ants largely ignored the party, but moved to block access to (presumably) their lair when Morg headed in that direction. Riley decided to call on Habuu to grant him power of speech with the ants, and proceeded to questions the critters. He learned they were gathering ‘shiny treasures’ for their queen. He received somewhat ambiguous answers when he asked about any rings the queen may have. Further questioning confirmed the only part of this tunnel system missed thus far was the ants nest, and that if they backtracked along the tunnel they would soon come to a running stream.

Doing just that, they party found themselves up against the red and white fungus once more. Looking at their dwindling supply of crossbow bolts, they considered other ways they might get through the patch. Riley again called on Habuu to give him the power of plant speech, and the cleric entered negotiation with the fungus. He found what it craved was moisture, so in return for free passage, Riley agreed to bring water from the stream. Deal made, the fungus closed up its spore caps, allowing the party to pass.  A short distance down the tunnel, they came to a low bank, below which lay a stream and pool. Ready to fulfill the bargain with the fungus, the party started fillings helmets and water skins. But they soon noted something didn’t look right. The water in the pool seemed to coalesce into a collection of wavelets, and suddenly rose up into a 4’ wave that slammed into Erijay. Grabbing weapons, the party moved to defend the elf.  Morg found his sword had no effect on the elemental being, so he borrowed a magic sword from Kern to help with the fray. And absorb most of the blows once Erijay backed away from the melee, casting  a triple magic missile on the way. With great effect, the elemental was beaten back, and the pool was still once more. While some of the party licked their wounds, a few carried water back to the fungus, and Kern examined the pool. Scattered along the pebbled bottom he found a number of gems, which he quickly scooped up. He also found that there was no easy way to go upstream, but that the downstream end flowed into a low tunnel through which the party could pass. With no other obvious options, this is exactly what they did. 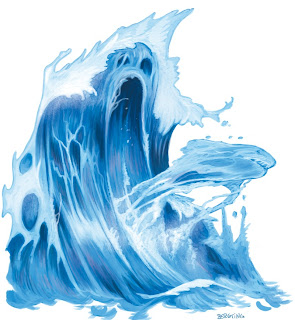 The stream emerged from the tunnel into another, larger pool. The stream branched here, one part going north and the other to the east. In both cases, the stream disappeared into the hill with no obvious way to pass. At the intersection lay an open patch of dry land, from which a small tunnel lead deeper into the hill. Heading that way, the party found themselves in another cavern. The floor was a mass of human corpses, all covered in a web of tendrils and vines. Morg probed one with his spear, and found the body did not seem to be flesh. But that action seemed to alert something, as the corpses were dragged to a standing position by the tendrils. The massive number advanced on the party, raking those in the front with their claws.  Riley tried to use the power of Habuu to turn the things, but to no avail. Given the overwhelming odds, the party decided to toss some flaming oil and then retreat back down the tunnel to make a plan of attack. A plan was hatched to give Darnorth the ring of invisibility so he could levitate over the corpses and see if there was some weakness they could exploit. The floating dwarf did indeed see an option; all the tendrils seemed to emerge from one point in the east wall. Attack there and they might take out the whole room of tendril corpses. While the party drew the attacks of most of the corpses, Darnorth hacked at the wall tendrils. It took quite a few blows, but when the final cord was cut, the tendril corpses fell back to the floor and did not rise again. 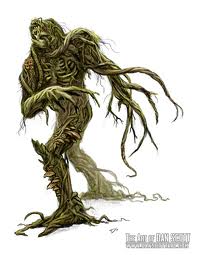 Battle over, the dwarf now noted the first obvious man made construction in this labyrinth. A small 10’x10’ alcove of red sandstone lay in the south end of the cavern.  Curious, he stepped in and promptly disappeared from sight. He found himself in another alcove like the first, which lead into a room with black a marble floor inscribed in white with a magic or summoning circle. In addition to another alcove with a white floor, two corridors exited the room. Not willing to explore further without support, the dwarf stepped back into the alcove and found himself back with his companions. The party wondered if perhaps they should all go through the teleporter, but Darnorth reported that something just didn’t ‘feel right’ about it and he wasn’t comfortable taking another chance.  Trusting the dwarf’s instructs, they headed instead further into the caverns. In separate rooms, they found a floor covered in red acidic ooze (neutralized when Darnorth dug a trench to flood it with water from the stream) and another room filled with thousands of small albino lizards. These crawled all over the party, licking their skin and generally freaking them out. Except Gurruk, who used his mastery of animal tongues to talk to the little critters. He didn’t learn much though; it seems the only thing on their minds was feeding on their sweat. But Gurruk did adopt one of them and brought him along once everyone was able to divest themselves of the rest of the lizards.

Backtracking, the party crossed over the stream to a new set of caverns. And here was yet another odd room. Partly built of finished sandstone, the floor was covered in a blue mossy substance covered with small bubbles or air bladders. After some investigation with a 10’ pole, they crossed the floor towarda a door on the far wall, making a squeeking/popping sound as they went. This attracted the attention of something in the far corner, as a protoplasmic mass of eyes and mouths rose up and started to quietly chatter at them. It didn’t seem a threat however, but the party passed through the door without delay anyway.  Here they found themselves in a room built of the same red sandstone and black marble floor that Darnorth had seen earlier. In one corner, however, was a square of white marble, while facing the door were two black marble thrones.  Closer examination of the thrones revealed they were covered in carvings of eyes and mouths. Darnorth bravely sat in the left hand throne. He felt some force trying to pull him away, but the sturdy dwarf fought it off and stood up no worse for wear. No one else was willing to try either throne though, so after some cajoling, all six stepped on the white square and found themselves teleported to the second alcove seen by Darnorth after his previous magical trip.

Taking the northern exit, a short stroll brought them into a room with doors to the east and west and a large pool to the north. The water in the pool seemed to well up from below, but from exactly where no one could tell. Checking the west door, they found a parallel corridor. Checking the double doors to the east, they found the head of a massive blue dragon starting back at them! Thankfully it proved to be stuffed and mounted on the wall, along with a number of other creatures in similar condition (goblinoids, mermen, an 8-legged lizard with bag over it’s’ head, a half man/half snake thing, giant snake).  Spying another set of doors on the opposite wall, the party entered the taxidermic museum. Halfway across, someone noted movement above. The ceiling seemed to be settling  down on them  like some kind of giant manta ray! Those at the rear and front bolted for the doors, but Morg, Erijay and Darnorth were trapped beneath the thing. In a flurry of blades, they cut their way out, but not before the unfortunate Morg was smothered to death. Hauling his body behind them, the party continued through the second set of doors into a large chamber. The room was filled with a weird whale song humming, and in the centre was a circle of silvery metal strips handing from the ceiling. Inside the strips was a white alter. On top of it sat a ring on a red velvet cushion, all covered by a geodesic crystal dome.  Kern very carefully examined the whole area for fiendish traps, before boldly stepping inside the circle. He knocked the dome off of the altar and grabbed the ring, breathing a sigh of relief when nothing untoward happened. Except the noise stopped. 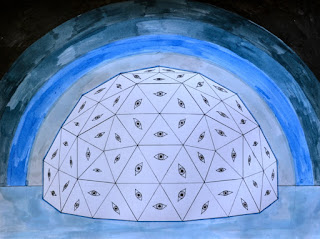 Exiting the room with their find, no one was sure what to do next. But someone came up with the brilliant idea of placing Morg’s body on the throne to see what would happen. Somehow no one could think of a reason to not do this, so back through the teleporter they travelled and dumped the bulky corpse on the black throne. His body instantly vanished, only to be replaced by another protoplasmic mass of eyes and mouths. This one seemed upset with its summoning, and began to gibber in a thousand angry voices …