After several weeks of rest, both Erijay and Bjorn had fully recovered from their recent trips to the afterlife. Which meant it was time for another delve into Stonehell, this time with a much smaller crew as Kern was the only other one available (with, of course , Sweet Jenny and Fin the War Dog). But before heading into the dark, Kern hoped to shed some light on the recent information he’d uncovered about the March Baron.  The March Baron was keeping the news of the party’s successful mission to kill “He Who Walks in Metal” from the King. And he is still getting the Kings’ support against a full hobgoblin invasion. He is also hiring tradesmen (stonemasons, carpenters, laborers) from lands to the south for no visible reason and hiding them amongst mercenaries. This was being kept secret from all but a few trusted retainers and only the Baron, and the mysterious fellow Jax, seem to know exactly what’s going on. Kern learned that Jax and the Baron leave Westmist for trips to the South and that Jax is frequently traveling to the Untamed Lands to the West.

Hoping to uncover some information on Jax, Kern headed off to see The Tongue, finding him at his usual table at the Foam and Whistle. Kern pulled up a chair, bought the old fellow a couple of drinks, and started to pump him for information. Scattered among the drunken, half coherent ramblings of the old coot, Kern managed to snag a few facts and hints about the mystery man. The Tongue warned Kern that Jax was a dangerous man, from whom no secrets stayed secret for long. Pressed for further details, the old fellow suggested that Jax was looking out for the good of the March Baron, but not necessarily the March Barony itself. And to better understand what’s in it for Jax, Kern would have to look into the March Barons’ past to find the key.  At which point, The Tongue dropped his head to the table and promptly passed out.

Somewhat better informed but with questions still, Kern and Erijay briefly contemplated a little spying on Jax themselves. But in the end they decided to heed The Tongue’s warning and put the plan aside for a day when the rest of their companions were available to support them. So back to Stonehell it was, to first check out the locked and trapped room left for Kern during the last delve, and then to further explore the third level. Passing once more through the secret entrance, the trio plus animals made it to the third level without any troubles. There they once more encountered Lachesis and her ogre bodyguards, headed back to her quarters after meeting with some ‘clients’. Kern, having been forewarned by the ogre’s heavy footsteps, donned the ring of invisibility. This left Erijay to engage in a little polite, but guarded, banter with the spy mistress. Turning the discussion to Duncal, Lachesis seemed to hint that her information (generally) is only as reliable as her sources. But that her information on Duncal could be trusted; her source for that information was both impeccable and intensely interested in the party’s endeavors. 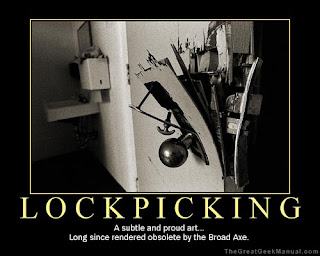 Leaving that tidbit of information hanging in the air, Lachesis and her guardians moved on, while the party continued on their way in the opposite direction. Reaching the corridor with the boulder, Kern first listed at the door where bugbears had been heard last time. Finding nothing there, he moved onto the boulder. Here, the merchants’ keen ears could hear the faint sound of feet scuffling around. And finally he came to the trapped door. Locating the wire found by Darnorth, he studied it intensely for a few minutes, then proceeded to swiftly cut the line and thereby easily disarmed the trap. Finding the door locked, and unable to open it by his own skills, Kern waved Erijay into place to bash the portal down. Much noise ensued, but the door still stood. Pushing the elf maid aside, Bjorn took to the door with muttered curses, and after a few more minutes of bashing the door swung open. Inside was a fairly spartan bedchamber. An old leather apron and hood hung on one wall, and a wardrobe stood against another. Kern checked the wardrobe for traps, and then opened it up to find a few moth eaten bits of clothing, but little else. Erijays’ keen eye, however, noted that the inside of the wardrobe was not flush with the floor. A little poking about uncovered a pair of handholds, with which the elf lifted out the base to reveal a pile of silver coins and gems.

At this point Bjorn, standing guard at the door, shouted a warning. Kern swiftly donned the ring again, and headed for the door. Bjorn reported seeing, at the limit of his light, a half dozen small creatures leaving the rock blocked corridor and heading east. Kern silently approached the spot and watched for awhile, but nothing further was seen. Taking care to now watch their backs, the party loaded their newly acquired treasure onto Sweet Jenny and head further west into as yet unexplored territories. Coming to a pair of archways, the party chose the north and found themselves in an open area with multiple doors leading off of it. Kern started listening at doors, but soon halted when he encountered a strange reddish amoebae-like creature blocking his way. The merchant backed away, and Erijay hauled out her crossbow and fired a shot at it. To their surprise, the pulsating blob simply split into two and started to slide towards the brave adventurers. Backing slowly away, the trio lobbed oil flasks and torches at the creatures until they were consumed by the purifying flames. 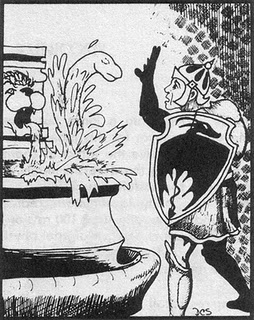 Now resuming their investigation of the hall, the party started searching room near a placid fountain. It didn’t remain placid for long, however, for when Bjorn got too close, the water formed into a grotesque toad-like shape and lashed out at the magic user. He managed to dodge and back away, but now the rest of the party turned to engage. Erijay cast a web to pin the thing inside the fountain, while Bjorn fired magic missiles from his wand and Kern followed up with bolts from his crossbow. The thing continued to strain against the web, which slowly started to give way, but not before the efforts of the party caused the thing to dissolve back into the fountain.  Stepping forward, Kern cut away the remaining web to better see inside the fountain. At the bottom he could see a scattered collection of jewelry, and a gem studded sword. Distracted by all the shiny stuff, Kern didn’t notice the water begin to stir as the toad-like creature reformed and lunged at the merchant. Caught, Kern found himself pulled into the fountain and pinned under the water.  Erijay and Bjorn instantly leapt into action, with a rain of magic missile and sword blows to end the creature’s threat once more. The elf then pulled Kern’s unconscious body out of the water and dragged him away to safety. A few chest thrusts later, the merchant was coughing up water and back to consciousness. And determined to find a way to recover the treasure in the fountain. Going through their options, Erijay suddenly remembered the potion of sweet water she’d been carrying for so long. Could it be used to ‘purify’ the thing to death? Deciding it was probably as good a plan as any, Kern first tied a rope around Erijay’s waist to pull her to safety if the creature grabbed her. The elf then glided forward until the creature started to reform. She then hurled the potion flask at the back wall of the fountain, where it smashed and poured its contents into the water below. The thing dissolved once more into the water, and it did not reform again. At which point Kern jumped in the water and started hauling out the pile of jewelry and the sword, packing it all carefully onto Sweet Jenny.

That danger and treasure taken care of, the party next turned their attention to the doors around them. Behind each was found a 20’x20’ room with similar furniture and fixings (beds, pallets, dressers, tables, and so on). Each did have its unique features though: 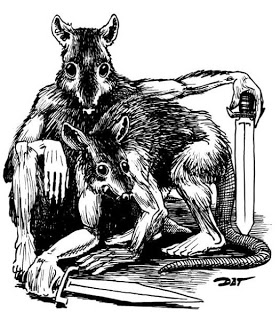 Now loaded down with treasure and collectables, the party turned to head back to Westmist. They didn’t get far before Kern’s keen ears caught the sound of bugbear voice ahead. Donning his ring, Kern snuck silently around the corner, to find the bugbears waiting in the intersection by the boulder.  They didn’t seem to be going anywhere, but were instead casually on the lookout for something or someone. There being no other way out, Erijay cast a sleep spell and the four critters fell into slumber. Kern then silently moved past them to see what was further ahead. At this point a snarl came from behind Bjorn and the animals, and three rat-men fell on the rear of the party.  Trapped between mule and rat-men, Bjorn fell to their fangs. They then turned on Erijay and Sweet Jenny, who happened to be in their way. The elf first stopped to force a healing potion into the fallen magic user, before turning her sword on the nearest attacker.  Joined by the still invisible and now vengeful Kern, the two slew the creature in short order. Shocked, its companions turned and fled, earning a swift kick from Sweet Jenny in retaliation. Erijay and Kern likewise pulled out crossbows and should have dropped both in their tracks. But their bolts seemed to have no effect on the beasts, who were quickly swallowed by the darkness.  Quickly looting the one rat body and the (now slain) bugbears, they pair then loaded Bjorn’s body onto Sweet Jenney for the thankfully uneventful journey back to the surface and civilization. There they cashed in their treasures, discovered the sword and container of salve were magical, and deposited the unfortunate Bjorn back in bed just two days after recovering from his last death.