Back to Stonehell to scout routes to levels below, Erijay (with Fin the War Dog), Darnorth, and Riley (with Gurrruk and 2 wolves) ran into trouble once again while passing through the old hobgoblin fortress. A small band of crazed berserkers tried to block their way, but were swiftly defeated by the party. Wiping blades clean, they continued on a now familiar route to the third level, making their way without further incident to the octagonal chamber and elevator room. Expecting no problems here, they were surprised by a bugbear ambush which took the place of the gargoyles. A bloody fight ensued, from which the party emerged triumphant. Finding that the elevator was not currently on this floor, and not knowing any way to call it, they decided to loot the bugbears and then head to the south. After poking around a room with wardrobes holding white robes and pairs of rusty, steel mesh gloves, they continued south. There they found a room filled with empty cages, in the centre of which stood a pair of metal tables, fitted with leather restraints. Suspended above each was a metal bowl connected to each other by wires. The faintly monkey smell convinced Darnorth this setup has something to do with the dreaded cybernetic monkeys, so the dwarf proceeded to cut all the wires and generally trash the apparatus. 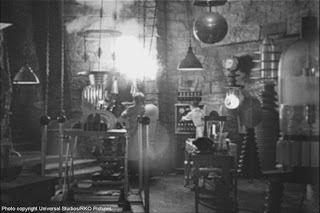 Feeling better now, the dwarf led the party through the west door and out of the room. Only to find waiting on the other side a half dozen of the dreaded monkeys. Erijay was able to shut down half with a well placed sleep spell, but enough remained to link up and fry the dwarf with a zap of lightning. However, the rest of the party rushed in behind Darnorth and soon the monkeys lay on the floor oozing green ichor and mechanical bits. With time now for a breather, the party looked around, and found themselves in another room of large cages. The few nearby seemed empty with the doors hanging open. However, when Darnorth poked in a pile of bones in one, two skeletal baboons emerged and attacked with their raking claws. Once again the party drew arms to fight simian nightmares, and once more succeeded. Working their way around the room, they noted another with bones, which Riley quickly slammed shut just as another skeleton arose. This one they dealt with through the bars of the cages with no harm to themselves. As they completed the circuit of the cages, however, they ran into a band of the skeletons emerging from their cages before the party got too close, Another fight ensured, and while half of the skeletons attacked the front ranks of the party, the other moved around to their rear and attacked there. Caught between the two, the party found itself in desperate straits. First one of Gurruk's wolves fell, then the redoubtable Erijay. It was only with hard fighting, and some especially lucky hits by Riley, that things didn't end even worse. But they were bad enough, and the party elected to carry Erijay back to the temple to take advantage of their new discount raising rate. They very nearly didn't make it though, as they were intercepted by another band of bugbears before getting too far along. These were not too interested in tangling with the party though, having seen their recent handiwork with their friends in the elevator room. After some quick back and forth threats, the two parties decided for now to part ways in opposite directions. 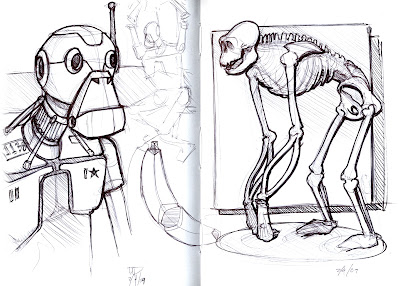 Back in Westmist, Erijay was trotted off to the Temple of Three Virtues, raised, and then dropped in bed for a couple weeks recovery. While the elf was fed a steady stream of chicken soup by the loyal Riker, Darnorth and Riley poked round town for information and rumors.  The most obvious change was the number of troops now in town; it was starting to look like it did the previous fall when the March Baron was preparing for the hobgoblin invasion. Apparently Lord Merdwyn was taking no chances even though "He Who Walks in Metal" was dead.

Going to see Afflain the Fence, they discovered a response to their counter offer to Zoloran for the mirror of aging. The archmage now offered 1500gp and information on where they could find a ring of wishes, so they couple bring back Darnorth's lost vitality. Now that was an offer Kern might be interested in when he returned. Hafus also returned to Westmist during Erijay's recovery. He brought word from Sir Janus that the knight was underwhelmed by the party's progress in fulfilling their part of the coup d'état plan. He was recalling Hafus permanently, and considered their deal on hold until such a time as the party could show something that upheld their end i.e. Duncal. In the meantime, Sir Janus would continue with his own plans.

When Erijay finally recovered, all were bored with town, so a quick jaunt was made to Stonehell. Passing to the third level without incident, they headed further west this time, down the corridor branching off the narrow 5' passage. At the first door encountered, Darnorth listened and heard bugbears. Choosing not to fight the big hairy goblins again, they continued west, encountering a corridor blocked by a 10' boulder. Although small gaps could be seen in the corners, there was no easy way for any of the party to get through. But it certainly made them think of wererats. Turning south to complete the map connection to the garden area, they explored several more rooms. In one, a mass of brown vines covered the floor, and under a table on the far side a stongbox could be seen. No one liked the look of those vines, especially since a skeleton could already be seen on the floor under them.  Darnorth floated up on his boots of levitation, and hauled himself over along the wall. Once over the table, he managed to hit a bulls-eye with a grappling hook, catching one of the handles. Lifting it, he was not surprised to find the vines trying to climb towards him, but the floating dwarf made it out of the room and back among friends with no trouble.  Carefully opening the box (away from himself), Darnorth found a pile of silver coin.

Heading back towards the boulder hallway, the party checked out a couple of doors. At one, Darnorth discovered what appeared to be a trap, a fine wire running from the handle and up into the ceiling. Wishing he'd paid more attention to Kern, the dwarf decided to not tempt fate by trying to disarm it. Instead, it was noted on the map for the merchant to deal with later. Checking the next room, they burst into an old torture chamber, where four gnolls were trying to remove an iron maiden from the wall.  Thinking the party was there to deprive them of their treasure, the hyena headed creatures attacked. Alas, they made little impression on the party, who then finished the job of ripping the coffin-like object off the wall. But they found nothing of interest behind it or elsewhere in the room, and do decided to head back to town while still in good shape.
Posted by ChrisS at 5:33 PM