Westmist Session #40 - Down the Garden Path


Kern, disappointed that he missed the latest delve into the dungeon, convinced Eirjay (with Fin the War Dog) to accompany he and Bjorn back into Stonehell. No one else was not interested in going back so soon. First, however, the two decided to try and find out what was up with the Baron and his plans, since they didn’t think the hobgoblins now presented much of a threat. Still unable to get an audience with Lord Merdwyn, they instead hit the taverns to question some of the mercenaries now arriving back in town in large numbers. They found one, a trooper with Lakser’s Horse, a young fellow fresh off the farm. He wasn’t much help, knowing only that they were being paid by the King to march in support of the March Baron. Exactly what the plan was, he didn’t know.

Leaving the whiff of intrigue behind, the trio (Erijay, Kern and Bjorn) plus livestock (Fin and Sweet Jenny) headed down the dark halls once more. An uneventful journey through their secret entrance soon brought them back outside the double doors on the third level. After a short discussion, the decision was made to explore to the north and east. Here they hoped to find the wererats Lachesis had mentioned, or additional ways down to the lower levels as indicated by the kobolds. They soon found themselves in the strange greenhouse section, with loam and plants on the floor, and that strange glow and leaking pipes all around. Heading south, they soon found their way blocked by a collapsed ceiling. Checking out the one room remaining, a trio of strange frogs with dazzling eyes were encountered. Right away, Erijay, the dog and the mule were mesmerized from staring into the creatures swirling eyes.  It took two a pair of sleep spells from Bjorn and some cut and thrust by Kern to end the threat. After which they slapped the elf and animals out of their stupor and headed deeper into the wild. Passing their old wine cellar, they found in the next room a path cut though a thick growth of giant ferns and mushrooms. Their ears were also suddenly split by a piercing wail from the far corner of the room. Kern donned Erijay’s ring of invisibility and silently crept towards the noise to investigate. As he entered the thick growth, the noise stopped. He searched the area but found nothing beyond the plant growth. Puzzled, he rejoined the rest and they continued on the path west. Passing through the next room, Kern scouted ahead while the rest waited. While Kern methodically worked across the room, Erijay and Bjorn both noticed movement out of the corner of their eyes. One of the giant ferns was moving, walking in circles, its fronds waving up and down. Intrigued, Erijay approached and spoke to the plant, which retreated into a corner with fronds drooping low. Unable to communicate with the fern and unwilling to disturb it further, the party moved on. 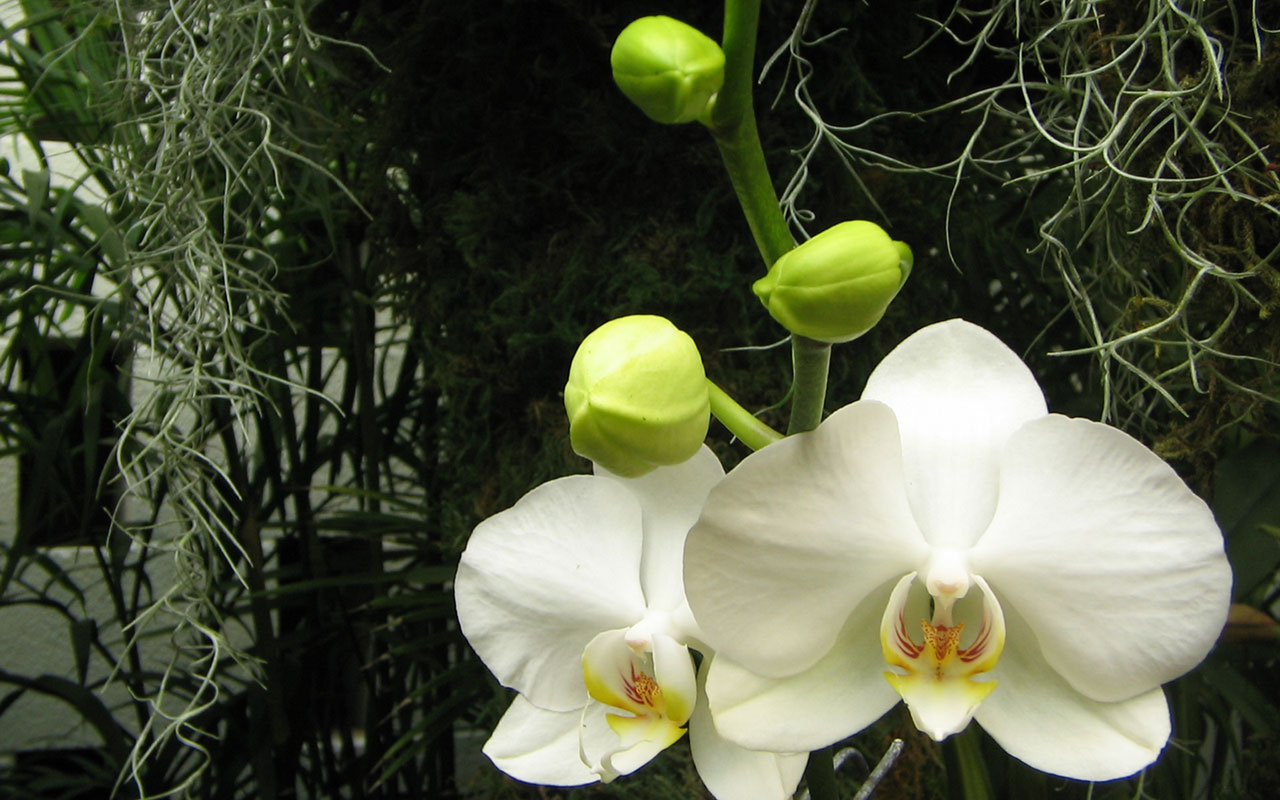 It wasn’t long before they encountered a door on the north side of the corridor. Opposite it was an alcove containing a pile of rusted chain and pulleys. Looking up, they could see a shaft going up. Lacking Darnorth’s pink boots, they decided to try out the door first. When Kern tried to open it, the door wouldn’t budge, even though the merchant could see no locking mechanism. Putting shoulder and brute strength to work, he was able to break the door open. On the other side, he could see a mass of vines, some of which had wedged the door shut. There were also a series of old crates and barrels lining the walls, some of which were grown over with a vine studded with large white flowers. While Kern carefully examined the bare crates, Erijay went over to a flower and touched it. The blossom immediately expelled a cloud of pollen which engulfed the elf maid. Coughing and sputtering, Erijay stumbled away. And stumble she did, finding she now seemed to be walking as if she had two left clown feet. The whole party now cleared the room to decide what, if anything, they should do about checking out the rest of the crates and barrels. A plan was hatched shortly. Erijay cut open a sack and laid it gently below a flower. She then left the room, and Bjorn used a slight breeze cantrip to trigger a pollen explosion, which was collected on the sack. This was repeated for each of the remaining blossoms. Bjorn then used another cantrip to gently place the collected pollen in a vial, which Erijay hoped she could give to Synthini back in town to brew up an antidote. Kern meanwhile rifled through the rest of the room, finding a sack of coin and gems in one of the crates.

Loading the treasure onto Sweet Jenny, the party headed west once more, and soon came to a four way intersection. To the west stairs were seen going down, while to the south a loud buzzing could be heard. Kern slipped the ring of invisibility on again to go investigate, and found a room with a huge bee hive and half a dozen giant bees. Slipping back to tell the others, he was shortly followed by three strange mushroom men who had entered the corridor from the east. With weird whistling whoops, these charged forward swinging clubs, but were soon sliced and diced into oblivion. 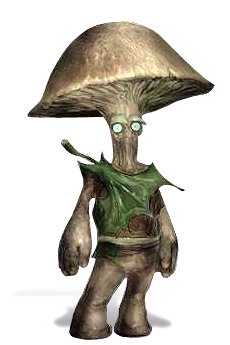 Party consensus was to ignore the bees for now. Checking the room from which the mushroom men emerged, the party found nothing but a mass of nettles and thorns. Seeing a door to the south and another passage on the opposite side of the room, the party decided to loop back the way they came and approach from the east side. Doing so, they found themselves in a wide corroder with a line of planters down the centre and a half dozen doors to the north and south.  In one planter grew a strange tree, half pine and half palm. As the party passed it, the tree whipped around and flung several large coconut sized fruit at them. These exploded on contact, badly burning Bjorn and singeing his feather cloak. Not about to take that kind of attitude from a tree, the party hacked into in and soon turned it into firewood. Free now to check out the doors, the party found a series of out dormitory rooms. In several they encountered large slugs, one of which Kern skewered. In another room, careful inspection of the ceiling saved them from a green slime, which Erijay proceeded to burn using a torch tied to the end of a 10 foot pole. In several rooms, small pieces of jewelry were found hidden away in the old furniture. Erijay also recovered a volume of lore on poisonous plants, which she hoped might provide some information on curing her dexterity affliction.

At the far end of the corridor they found another door. This one, on examination by the cautious Kern, was found to be trapped. The wily merchant took care of that, and the party entered a richly appointed bedchamber with the statue of a thin man in a hooded robe on the wall opposite the door. Approaching the statue, Kern proceeded to check it for traps. He was surprised when the statue raised its fists and took at swing at him! Stumbling backwards, her drew his sword, and joined by Erijay and Fin, fought back. The statue was cut to pieces in short order, allowing the party to search the room. In the broken remains of the statue was found a small chest, which Kern was unable to open, so they loaded it onto Sweet Jenny instead. Bjorn meanwhile found a large spellbook which the strange mage agreed to share with Eirjay once they got back to town.

Now heading back to the thorn and nettle room, the party was surprised to see three of the nettle bushes walk across the room and bar their passage. Having had just about enough of cheeky plants, Kern and Erijay attacked. A short fight found the bushes trimmed down with only a few scratches to Erijay and Fin in return. Now able to reach the door in the south wall, the party found a ruined kitchen on the other side. Of note was the strange bush growing out of the kitchen sink, adored with a dozen blue waxy fruit the size of a small plum. Uncertain if she should dare any further plant touching this day, Erijay first consulted her new book. Finding no mention of such a bush, the elf maid carefully picked a fruit, with no ill effects. Emboldened she picked the rest, but didn’t test fate by actually eating any right now.  While Erijay picked berries, Kern checked out the door to the south. Opening it, he was immediately hit with a revolting rotting smell that almost turned his stomach. Slamming the door close, he wisely directed everyone out the way they came. Having tested their luck enough, the party decided to head back to town with their loot. 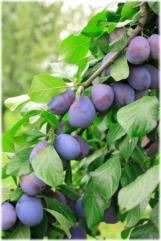 Back in Westmist, Erijay first paid a visit to Synthini to look for a cure for here pollen poisoning. The alchemist couldn’t help immediately, but did say she could probably brew up an antitoxin if given the collected pollen, a week, and 2000gp. Erijay considered it, but decided instead to visit the Temple of the Three Virtues. There she paid the same amount for a neutralize poison, but was back to her old nimble self immediately. Kern meanwhile was able to now open the recovered chest. In addition to some coin, it contained three potions (2 extra healing and 1 invisibility) and a wand of magic missiles which was turned over to Bjorn. And finally, Erijay tested one of the fruit and found it restored some of her hurts from the adventure. And so ended the session.