Westmist #41 - Do You Get the Feeling No One in this Dungeon Likes Us?


Gathering forces, the party returned once more to the depths of the dungeon, to scout out possible routes down to the halls of the mountain trolls.  Darnorth, Erijay (with Fin the Wardog), Kern (with Bjorn and Sweet Jenny) and Riley (with Gurruk and his wolves) headed for the depths following their usual route through the old hobgoblin fortress. This time, however, they met trouble.  As they passed through the narrow passage l to the iron turnstile, the front ranks of the party suddenly found themselves under attack through the loopholes in the east and west walls. Flasks of oil rained in and torches followed into the confined space. Trapped by the portcullis in front, they scrambled to get back out through the door. But not before several received terrible burns, and Sweet Jenny the mule and Bjorn the magic user succumbed to the flames. Erijay, gallantly assisting the fallen mage, tried to force a healing berry down his throat, but the magic user just retched. Instead, she poured a healing potion in his mouth and then dragged him to safety.  Darnorth provided covering fire with his crossbow, while Riley and Gurruk tried to bust down the doors leading to their assailants. The doors proved to be locked, and it took some time before one was broken open and the other unlocked by the crafty Kern. Behind the doors the party found empty rooms. Puzzled, Gurruk had the wolves sniff out their attackers, with the response of ‘rats’. Putting two and two together, the party figured their ambushers was the wererats who had transformed to rat form and escaped though the loopholes. 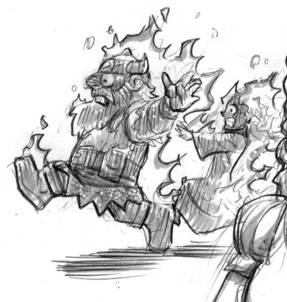 After Riley tore off the doors in a fit of vengeance, the party returned to Westmist to leave Bjorn at the house with Rikar so the mage could recover. They then turned back to the dungeon (after Kern purchased another mule), at first thinking about finding and dealing with the wererats. They decided instead to head down to level four to try making friendly contact with the gentleman ghouls, and perhaps learn more about the lower levels. Making it back to the scorpion room, this time they headed east with Kern scouting invisibly ahead. Facing the first door, Darnorth decided to be gentlemanly and knocked. In response came the gruff shout “Who’s there? What do you want?” After some persuasion, the occupants of the room opened the door, and the party saw a burly human fighter and an elf with an arrow notched on his bow. These two said they were survivors of an adventuring party, hiding out here after losing their comrades to the gentleman ghouls. Unwilling the brave the dungeon alone, even to make it to an exit, the two asked to join the party long enough to get out of Stonehell. While no one was really sure the two (Ban and Tal by name) could be trusted, they were allowed to join the party, firmly ensconced in the middle of the matching order where Gurruk and Riley could keep an eye on them.

Considering their new companions might not want to deal with the ghouls again, the party headed instead back to the weird temple to the west. A series of old barracks, storage rooms and martial training rooms were explored at first. While checking out one, the party was surprised by a pair of translucent spirits, features racked in pain. These drifted towards the party who ended their never ending pain at the end of their swords. But not before Darnorth was touched by one, bringing the dwarf to the edge of agony, an ordeal now etched on his previously carefree visage.  In another room, a large strongbox was found under a bed. Erijay found a key in the mattress, but before trying it Kern discovered a lethal blade trap which he disarmed. Now safe, they opened it up to find a massive pile of silver and gold coin. They loaded strongbox and all (‘never know, that trap might come in handy’ noted Kern) onto the new Sweet Jenny. 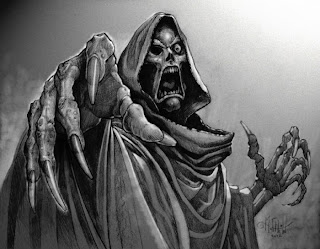 Several more rooms were explored, and another strange suit of animated moaning plate mail was dispatched. Then in a room at the end of a corridor, the party encountered a challenge. A small room, with a black iron alter and a wide selection of torture devices. And two more ghostly features, these looking more like the life draining apparition they cleared out of their house oh so many months ago. Bravely, Darnorth and Kern charged into the small space to fight toe to ghost with the two. Erijay tried a web spell, and learned that it didn’t help much against the incorporeal undead. Riley then drew on Habuu’s blessing to drive one of the fiends into a corner. The other, meanwhile, reached out and grasped Darnorth, draining away some of his vital life force.

At this point, there was a ruckus in the corridor, where Gurruk stood waiting with the two newcomers. Riley spun around and saw Ban and Tal had turned their swords on the beastmaster and the wildlife. With an orison of rage to Habuu on his lips, the cleric drove into the two turncoats. He was soon joined by Erijay, Kern, and the drained Darnorth, who by now had eliminated the one unturned wraith. Fighting in tight quarters, the two newcomers were slain. As a shocked party looked on, the bodies morphed into tall, grey humanoids with vague rubbery features. Doppelgangers!

That taken care of, Kern, Darnorth, Erijau and Riley returned to deal with the last wraith. While Erijay used the wand of magic missiles to snipe at the undead threat, the other three drove in with sword and hammer. The short but vicious combat ended with the creature destroyed and no one else worst for wear as a result. Now looking around the room, little new of interest was noted. Until Erijay tapped the altar with her sword pommel, and discovered that it was hollow. A careful search revealed no way to actually get inside the altar, so Darnorth decided to trust the magic of his sword to hack the top open. With much clatter and clanging (and after dealing with another agonizing figure attracted by the noise), the top was pealed back enough to reveal treasures inside. Four jeweled icons showing the Sorcha the Witch Bitch and Mistress of Pain, a scroll case, a mace, and an ebony rod. Gathering up their find, the party decided to now retreat back to Westmist.

Back in town, Darnroth tired to find magical healing for his pains and drains, but to no avail. A little detect magic and experimentation revealed they now owned a mace +1 (claimed by Riley), and a clerical scroll of heal and remove curse. Riley then took the strange ebony rod to the Temple, hoping that Liphanes of the Highest Virtue might be able to identify it. Alas for Riley, the high cleric was not available, and he instead had to meet with the decidedly unhelpful Lanthan the Under Virtue. The bitter churchman offered no help, and instead directed Riley to one of the magic users in town. With unusual grace, Riley left the temple to do just that, leaving the rod and a bag of gold with Synthini for her to identify.
Posted by ChrisS at 9:28 AM