Westmist Session #44 - Invasion! ... And Lots of Running Around


With Bjorn left once more in Rikar’s care, Kern and Erijay turned their thoughts to next steps. The question at the top of both of their minds was the “what is the March Baron planning”. Once more putting aside any thoughts of following/confronting Jax or the March Baron alone, they instead hatched a desperate plan to ride for Sir Janus’ camp and see if he could provide any information. Sensing time was running short now that spring and the campaigning season has arrived, the two purchased swift horses, and left Sweet Jenny and Fin behind to ride hard and fast for the mountains. After just a couple of days, they found themselves once more climbing the hill towards the ruined village, having been briefly held up by a band of goblins on the way.  After a few tense moments with the picket, Sir Janus arrived on the scene and waved the two into his headquarters.  They first discussed Duncal. Kern updated Sir Janus on their search so far, and asked if the knight had a portrait of the heir (since none of the party had any idea what Duncal looked like). Sir Janus provided them with a locket, inside which was a small portrait of Durgan the Bold, his wife, and Duncal as a young man. Who unfortunately looked a little mousey and frail, causing Erijay to mutter under her breath that hopefully the young man grew up into someone a little sturdier looking or they were all in trouble.  Questioning Sir Janus about his plan once they did recover Duncal, Kern and Erijay quickly realized that while the knights’ heart might be in the right place, he obviously wasn’t a deep thinker and hadn’t considered in any detail how he was going to overthrow Lord Merdwyn. The best he could come up with was to use Duncal to recruit followers and raise a rebellion, and assume that the King would not intervene because it was all done out of “honour”. Overall, not very reassuring.

Next laying out what they knew about the March Baron’s activities, they asked Sir Janus if he had any news or information. Alas, he had little to offer in new information. He told them Jax was one of the March Barons’ youthful comrades, with a reputation as a man to help keep things quite at any cost. As for the March Barons’ possible plans, he could shed little light other than to say Lord Merdywn had made it clear from day one that Westmist was to be a platform to launch himself back into a position of greater power. As for hobgoblins, his men had reported none in the last few weeks. The few hobgoblin patrols seem to have disappeared from the hills.

Taking their leave of Sir Janus (having had a request for men to help them bluntly refused), Kern and Erijay headed back towards Westmist. However, just as they reached the end of the mountains and prepared to turn east, Kerns keen eye spied movement on the hills below them. Hobgoblins! Thousands of them! Marching towards Westmist! After a swift debate, discretion was chosen over valor, and the two tried to keep out of sight of the army until they could ride hard and warn the town.  Unfortunately, there was too little cover on the bare hills, and they were sighted by the first cohort. As Erijay cast a haste spell to now speed them on their way, a rain of crossbow bolts fell on them, nearly killing their horses. They survived, however, and moving with magical speed, they pulled ahead and reached Westmist at the crack of dawn (after riding through the night). And found the commons around the town mostly deserted; the troops were gone. Questioning the town guard as they entered, they learned Lord Merdwyn had received word that hobgoblins were marching on the Citadel of Amrath, and hurried his army west to meet them. Since the party had taken care of their base in Stonehell, no one had expected a hobgoblin force to come from the north. Mild panic ensued, as the town was defended by just the town guard, a couple of companies of peasants and one mercenary company in the Keep. Swift riders were sent to recall Lord Merdwyn, and a flurry of activity saw town gates closed and barred, townsfolk laying in supplies for a siege and barricading their homes, and everyone looking west hoping the army would return in time. 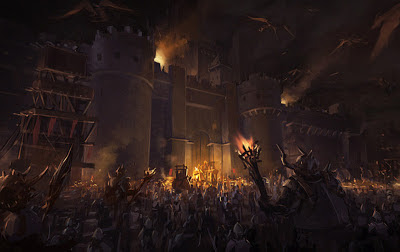 With nothing to do right now but wait on events, Kern and Erijay checked in on Riker and Bjorn. Riker, excited and nostalgic for battle, asked permission to draw weapons and armor from the house stash and attach himself to one of the companies. Given his leave, the old solider did mention Bjorn was acting strange in his recovering. Puzzled, Kern looked in on his henchman to find that the man’s face had started to elongate and he seemed to spend a lot of time twitching and snarling at them. And then they remembered that Bjorn had fallen to the fangs of the wererats. With haste, they bundled him onto a stretcher and headed for the Temple of the Three Virtues. There they were able to get an audience with Lanthan the Under Virtue (the Highest Virtue had ridden with the army). The sour cleric confirmed that Bjorn was suffering from the disease of lycanthropy and would soon become a wererat.  Asked by Kern if he could help, Lanthan agreed to cure the henchman of his disease for the usual fee.

That done, Bjorn was returned to bed to continue his recovery. Meanwhile, Kern and Erijay debated what they should do next. Kern decided to scout around Stonehell for the hobgoblins, but they were not yet in site. Various plans were hatched to get out of town and save their necks, dig deeper into the March Barons plans, etc.  In the end, they choose to sit tight for now and see what happened, confident they could escape if need be when the time came. And so they saw Lord Merdwyn march into town several days later at the head of this host, just hours before the hobgoblins debouched out of the hills. Not content to wait out a siege, Lord Merwyn marched out of the town and hit the hobgoblins before they could get organized. The battle that followed was brief and bloody, but the hobgoblins were well outnumbered and destroyed. The town breathed a collective sigh of relief and broke into a celebration of victory by troops and townsfolk. Erijay and Kern, however, took this as their chance to ride out of town when everyone was too drunk to notice. Leaving Bjorn once more with Rikar (who survived yet another battle) they picked up the mirror of aging from Aflain the Fence, planning to combine a scouting trip into the Untamed Lands with a stop as the Castle of the Golem  to deliver the mirror to Zoleren (and perhaps gain some information from the archmage on what was going on in the west). One days ride brought them to the Citadel of Amrath, to which they were given  shelter and rest for the night. The garrison, blasé as usual, pointed out the campfires of a hobgoblin army on the other side of the Great River. They were waiting for Lord Merdwyn to come with his army; meanwhile, the garrison was simply keeping watch on the hobgoblins. 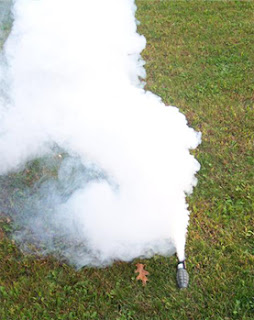 Next morning, unable to cross the river under the eyes of the hobgoblins, Kern and Erijay headed north into the Marsh of the Whispering Mists. Their plan was to get far enough to be able to cross the river (thanks to Kerns folding boat) without being seen. Alas, that plan almost ended in disaster as they stumbled upon a lizardfolk war band and got tangled up in a messy fight. Erijay led off with a sleep spell which took out half the creatures. But then a combination of good luck on the part of the lizardfolk , and rusty melee skills from Kern and Erijay, left the pair in a dire situation. Badly hurt, and their horses having bolted into the marsh, Kern yelled to Erijay to hold his hand and follow him no matter what happened. The merchant pulled out a pair of pyrotechnic bombs he’d had Synthini prepare, and with a flash and bang he and Erijay were hidden in a cloud of smoke. Temporarily masked from the lizardfolks’ view, Kern slipped his ring of invisibility onto Erijay’s finger, and then relied on his own skills to hide himself from their scaly foes. Given a temporary respite, Erijay now cast a web on most of the remaining lizardfolk, leaving just one for her and Kern to cut down with their blades. Finishing the webbed and slept lizardfolk, Erijay next cast haste so she and Kern could chase down their horses. That done, they decided to get out of the marsh, cross the river right here and try to at least reach Braksis’ Hold to spend the night. This they did, but were greeted with a grim sight. The Hold had been recently burned to the ground, and hanging on gibbets in front of the ruins were a number of bodies. These they recognized as Braksis, his stable boy, and his servants. Below them was a sign that read “See the punishment for those who help the hobgoblins”. Disgusted by the sight, the two had little choice but to find somewhere in this grim place to make camp for the night and continue their journey in the morning.
Posted by ChrisS at 9:09 PM