The day opened with Eazam, Rylee, Kern, Erijay (and newcomer cleric of Habuu, Kentra), clustered around a table at The Golden Drake. They were  examining the map of their explorations in Stonehell thus far, looking where next to seek their fortune. It soon was obvious the only substantial area left on the first level were the crypts to the east.  Confident their two clerics could handle any undead occupants, the band descended once more into the benighted halls, accompanied by the dogs Rufee and Fifi, and Sweet Jenny the mule.

First step was to convince Sweet Jenny to go into the dark again, accomplished only with a healthy bribe of carrots. Stopping first to speak with the talking stone head to gather information about the crypts, the band was waylaid on their way by a pair of crab spiders, which were quickly dispatched. Passing through the stone doors emblazoned with the danse macabre, the first challenge was traversing the grand entrance hall. Where once fire beetles grazed, now a trio of giant shrews snuffled through the moss and lichen looking for food. An uncertain stand-off ended with the party attacking, only to find the lighting fast shrews were much more of a challenge than anticipated. In fact, Kentra's brief dungeon delving career was ended by the teeth of the vile rodents. 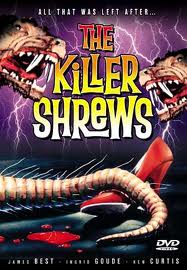 Finishing with the shrews, next stop was the exploration of a few crypts. When one proved to hold zombies, these were barred in the room by nailing in some iron spikes, and the party decided to explore elsewhere.  Passing into another large chamber, they encountered the skeleton of a huge serpent.  Harmless itself, it did hide a number of other skeletons which were quickly dispatched by axe and the power of the mighty god Habuu. Found cowering the corner was Lorek, another cleric of Habuu and the lone survivor of another adventuring band, who immediately joined his rescuers.

Passing south out of the serpent room, Erijay discovered another way to the second level by falling through a trap door and down a chute. Finding a room full of previous trap victims (now deceased) , bloodstains and broken equipment, she was soon pulled back to level one by the rest of the band. Continuing on, a room with a great statue of Baal, god of Death and Fire, was encountered. Sitting in the statues lap was a great furnace, and the room was marked with signs of fire or explosion. Cautiously, the party explored around the edges of the rooms, avoiding the scorch marks as they feared a trap. Interrupted once by a easily handled band of skeletons, the band hurled torches at the furnace to try setting off the trap, but to no avail. Puzzled, they moved on, only to be surprised when zombies began bursting out of walls and surrounding them in the corridor. Again there was a flurry of melee, missiles and turning before the danger was ended, but not before Fifi the wardog lay dead. 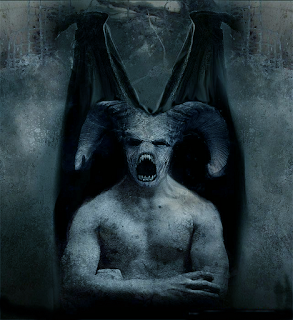 Now the party entered what was easily the largest chamber encounter so far in Stonehell. The vast hall had a ceiling where bats circled far beyond torchlight, massive bone-carved columns and a large brass gong at one end. A quick survey by Erijay with her infravision also showed an army of the undead approaching from all around the room to attack! Quickly vacating the room, the party gathered back in the serpent room, poured oil on the floor between them and the trapdoor discovered earlier, and waited. As the mindless army of undead approached, some fell to a second death below. Those who made it past the trap were then engulfed by flames as the oil was lit, the final few flaming zombies being dispatched by the front line fighters. 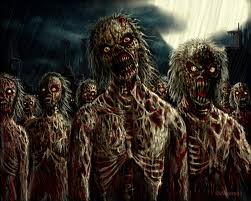 Relived at having survived that onslaught, the party moved forward again, only to find behind the next door a trio of ghouls, hungry for new flesh. Things went downhill fast, Erijay, Eazam and Rylee all falling to their claws, near death and/or paralyzed. With what must have been divine help, Kern and Lorek managed to drive back the foul eaters of the dead, spiked the door shut and then quickly hauled their companions out of the dungeon and back to town for recovery.
Posted by ChrisS at 8:35 PM