Westmist Session #12 - Boldly into the Unknown (and Back)

Scant days after their first expedition downriver, Rylee, Kern, Lorek and Erijay (joined again by Eazam) were preparing to leave for the ruins of Nasper, to  follow-up on the rumors of hobgoblin armies on the march. Apart from themselves, and  the hirelings Largesh and Narmor, in their own magical boat, they hired Gundar and crew to transport their supplies and the Barons` men-at-arms. As they prepared to head out on the river, the town guards informed them another boat had run under the bridge during the night, whcsh immediately put the group on guard. They resolved to take care going down river, and to especially watch for trouble at the spot where they met the first boat a few days before.

Stopping again to spy on that spot, Kern discovered another boat pulled up in the creek, apparently loaded with cargo, and this time guarded by many more men. They choose not to challenge this group, but continued on their mission, reaching the Citadel of Amrath at nightfall. Intercepted by the Kings White Company on the river, a quick discussion reveled the garrison was not particularly worried about any activity on the far side of the Great River, having neither the inclination nor the manpower to do anything more than monitor traffic travelling on and across the river.

Finding little aid from the citadel, the party chose to leave Gundar and the second boat there, and approach the ruins of Nasper on foot. Reaching the outskirts, they saw signs of activity throughout the ruined town, noting especially the ruined castle on an island in the River Thaytis, and the remains of some large building on a hill on their side of the river. Waiting until nightfall ,the party cautiously moved through the ruins towards that hill, Kern scouting in front. Halfway there, Kern broke into a clearing in the brambles only to see  a band of men dressed in wolf headpieces. They were likewise surprised, but with a whoop chased him back through the ruins, only to run straight into the rest of the party. Choosing mêlée over parley, they band swiftly dispatched the tribesmen, but not before the hireling Largesh fell with a spear through the chest. 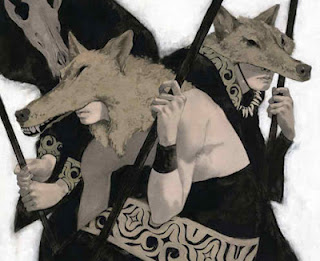 Leaving the men-at-arms to bury the unfortunate Largesh ,the party pushed on, skirting around a group of mostly intact buildings which seems to be home to the wolf tribesmen. Reaching the base of the hill, they discovered some earthworks on the crest, occupied by a band of hobgoblins. Erijay handled these with a quick sleep spell,  followed by a charge up the hill to bind and gag the fallen creatures before  anyone might notice. At the top, they found the sleeping hobgoblins, a watch fire, and a brass gong in the earthwork. The building next to it proved to be a ruined temple to Velas, which Rylee and Lorek reverently explored before getting to the task at hand; squeezing information out of their prisoners. One by one, they awoke the prisoners to question them, breaking legs as they went to get them to talk. The hobgoblins' military discipline was strong though, and it took several dead prisoners before one talked. Unfortunately, he must have been a new recruit, and he couldn't provide a lot of information. The party did learn about a 100 hobgoblins occupied the town (the 3rd Century of the 3rd Cohort of the Hobgoblin Occupation Army), guarding a forward supply depot and receiving supplies from the river smugglers from the east.  And that a much larger army lay in wait further back from the frontier, ready to sweep down on Westmist and the rest of the  Kingdom of Kellowai. 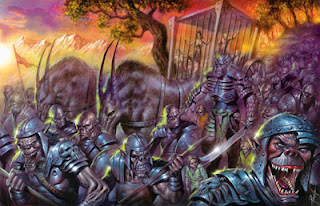 As dawn was now approaching, the party decided to get away while the going was good. First they had the men-at-arms take the dead hobgoblins back to the site of their battle with the wolf tribesmen, to make it look like they had died at each others hands. Then taking their prisoner in tow, they headed back the way they came, and were glad to be away when they heard an uproar in the town  behind them when the hobgoblins discovered their guard post was unoccupied.  Recovering Gundar and boat, they headed back upriver to Westmist. Along the way, they did note the second boat at the creek was gone, but on the opposite bank signs of a recent fire and crude rafts could be seen.
Back in town,  they met with the March Baron, and presented their prisoner and their story. He was more than a little skeptical of their tale of vast hobgoblin armies about the descend on his land, pointing out all they saw were a few watch fires, basing much of their story on what their prisoner had told them.  He was not prepared to raise the alarm based on such thin evidence, but did agree a closer watch would be kept on the river to intercept any further boats, something the party also wanted to do. And he agreed the honor his agreement of freedom of the town, and a house for the growing group.

Of the house, there was a hitch; it was abandoned, boarded up and reported to be haunted.  The brave adventurers didn't let that worry them, so guided to the spot by one of the Baron`s men, they bolding burst inside and began rifling through their new furniture. Little was found beyond old clothing and junk, although Eazem did recover a fine locked box (which he was able to have opened latter, to find a handful of coins and two gems, one a ruby of impressive size). On the upper level they encountered their haunt, a wraith who was dispatched withòut too much worry, but not before Lorek felt it`s chill hand of death drain him of vigor and power. Also of interest was a secret door found in the cellars, with a spiral staircase leading some 150`down. In a room at the bottom, they found a curious oval archway, filled with a purple shimmering haze. No one wanted to tempt fate  by walking through the arch, but they did note on closer examination there were 6 holes or cavities scattered around the perimeter of the oval, each about the size of a sling stone. 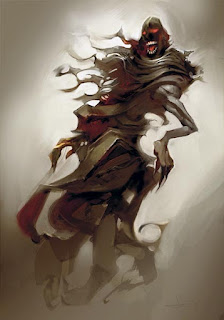 The band threw a great party in their new digs, and things got a little out of control. Lorek and Rylee got well into their cups and barely avoided mishap. Kern, unfortunately, got himself into some trouble. By the next morning, all he could recall was asking his god for help, and for once the god listened. And had now laid a quest on Kern to repay the his benefice.