Westmist Session #11 - Messing About With Boats

While Riley, Erijay and Eazam recovered from their near death experience, discussion around the tavern table revolved around what to do next. General consensus was they could use a break from Stonehell. Then Riley recalled a rumor he and Turrick had heard earlier, about boats running under the bridge over the Valen River. They were running the bridge late at night, and not responding to the hails of the guards at the bridge gate. Interest piqued, Rylee, Kern, Lorek and Erijay headed down to the bridge to question the guards. The guards confirmed the tale, noting it usually happened around the new moon and had been going on for a few months. The guards noted that the Masked Council of Three was not pleased, as the town was losing the 10% tariff levied on goods passing the bridge.

Armed with this information, the four headed for the Black Nobel Nymph and Staff tavern to talk with the Council. They found the three councilmen, in black robes and masks, dealing with various civic and criminal matters. Done their duties, the three removed masks and sat down to their cups. Rylee had the serving wench bring the councilmen some fine dwarven brandy, and after a few moments one of the council beckoned them over. The four discussed the issue of the boats with the councilman Anfor, and worked out a deal with the politician. The four would try to track down the identity of the boats, recover any goods being smuggled past the town, keeping half the cargo for themselves in payment. For his part, Anfor would supply a river boat and crew. 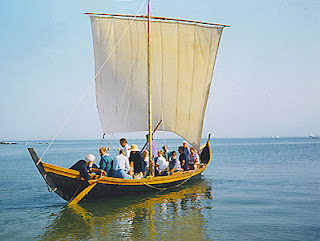 Deal made, the band hastily hired a pair of men at arms (Largesh and Narmor), then headed for Anfor’s private dock and boathouse to meet the helmsman, Gundar, and crew.  After Gundar made clear who was in charge of the boat (Gundar) and what role beyond working the boat he and his men would play (none), they prepared to intercept the mystery boats, as tonight was the new moon. Soon, the guards on the bridge signaled that a boat was approaching, and once it passed the docks, Gundar put his crew in motion and moved into mid-stream to follow. Dawn found the mystery boat pulling into a small creek flowing from the Marsh of Whispering Mists, while Gundar put his boat into the rushes a few hundred feet behind. Kern now moved forward stealthy on the bank to see what was happening. He saw the crew, a mix of rowers and armed men, being directed by a red headed woman in stained travelling clothes towards a campsite away from the boat. After some time, most had moved off into the mist, leaving a handful of grumbling men to guard the boat and cargo.  The cargo remained under wraps, so Kern could see only that the boat was loaded to the gunnels and low in the water. Listening to the men, he also learned another boat was expected at some point, so he rushed back to the rest of the group to decide what to do next.

After much discussion, the four and the men at arms crept back to the edge of the creek. Erijay then cast her Sleep spell, dropping the guards into slumber.  Largesh was sent running back to fetch Gundar and the boat, while the rest crossed the creek and hog tied and gagged the sleeping guards. When Gundar arrived, they ran a line to the mystery boat, loaded the sleeping guards aboard, and started to pull her from shore. Unfortunately, they were not quiet enough, and as they began to pull away, the rest of the mystery boats crew began running out of the mist. The rowers tried to circle around to cut off the boats before they reached deep water. The rest fired a rain of arrows, and the red headed women started casting spells. While it was a close run thing, the band did escape with the boat, cargo and prisoners.

In short order they discovered the cargo consisted of scale mail and polearms. Separating one prisoner form the other, a mix of threat and promise was used to find out what was going on. The prisoner, Breen, told them the boat was running arms and armour down to the ruins of Nasper, where they were being turned over the a group of hobgoblins. He and the others had been hired for the job in the city of Kingsford by the red headed lady, Alia. Breen didn’t know exactly what the hobgoblins were up to or who was sending the supplies, but he was pretty sure his captors would be sorry for getting in the middle of it and that he wanted to get as far away from them as possible. That was arranged, as the four stuffed a bag of gold into Breen’s hands, and then proceeded to dump him overboard to swim for shore.

Back in Westmist, they split the cargo with Anfor, while the three prisoners were tried and executed by being turned to stone in the town square. The party was also sent to the March Baron, Lord Merdwyn, to tell their story. Much worried, the Baron asked that the party find out what they could in the ruins of Nasper, offering some supplies and men at arms to assist them. They also bargained a house and freedom of the town out of the distracted baron in the process.

Preparing for the journey into the Untamed Lands, they were surprised to find the river boat they had stolen was no ordinary boat. It was in fact magical, and could be changed from a river boat to row boat to box by using the appropriate command words engraved on the gunnels.  The four also found time to celebrate their success. In the process, Erijay had a bit too much lotus and brandy, and tried putting to moves on some mysterious stranger of uncertain gender and race. Whoever it was, the stranger was not impressed by the elf’s advances, and tired to turn Erijay into a pig. It must have been the booze, as the enchantment had no effect, and the elf maid awoke the next morning with nothing more than a bad hangover.
Posted by ChrisS at 9:12 PM