Descending into the dungeon once more, our band again met with misfortune before penetrating too far toward their objective of exploring the southern part of the dungeon. Twice they were intercepted by giant crab spiders. The first encounter saw Erijay fall, but thankfully she eluded the hand of death and recovered after several weeks’ rest back in Westmist. The second encounter saw both Chanee and Warrick fall to the wicked venom of the arachnids, but alas, they were unable to cheat death and did not rise again.

After returning the bodies to town, Erijay, Turrick, and Rylee (a newly minted cleric of Habuu from the Temple of the Three Virtues), accompanied by a trio of war dogs, returned to Stonehell and successfully ran the spider gauntlet. Heading south and east, they were intercepted by a band of kobold and bugbear guards, who would not let them pass into the “Kobold Korners Marketplace” beyond until they forfeited their weapons. After much discussion, they decided to take their chances, and the band found themselves unarmed in an open bazaar of kobold merchants and craftsmen in the middle of the dungeon. Of note was the variety of creatures (gnolls, humans, bugbears) who rubbed shoulders with one another with no sign of conflict. Choosing to pass on the rat kebobs and foul ale, Rylee did have his fortune told by an old kobold soothsayer. From the old scaly one, they also learned that most of this section of the dungeon was occupied by the kobolds and little else. A little more window shopping, and a search of the junk merchants stall for the “Fickle Beaker”, then the adventurers chose to recover their weapons and see what was to be discovered to the west. 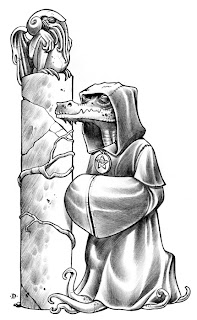 They almost immediately ran into a band of orcs digging a new tunnel towards the old orc lair. More surprising, they were guarded by a handful of tall, grey skinned humanoids in fine armor, advancing in a tight military formation. Battle quickly ensured with these orcs and hobgoblins, who were quickly reinforced by more warriors. Although one of the war dogs fell to the deadly polearms of the hobgoblins, the tried and true combination of melee and magic felled the rest.  Looting the bodies and exploring the surrounding rooms gave a few coins but no clues as to the creature’s motives.

Choosing to explore further unmapped areas, the band first headed back to the kobold area. Having been warned by the guards to not enter certain areas, Turrick satisfied his curiosity by poking around the kobold’s midden pit. Heading west again, a series of new rooms were explored including a throne room, burnt out temple and a few storerooms. Turrick stirred up a nest of giant centipedes in the throne room, and then proceeded to tempt fate by sitting on the throne (to no ill effect). In the temple, a band of berserkers and their fetid larder were encountered, and the crazed men added to the body count in the room.

Returning to town, the three settled down to planning their next expedition to the night haunted halls.
Posted by ChrisS at 8:21 PM