Suitably rested and re-equip after a few days in Westmist, Ranthor the Dwarf, Erijay the Elf, Turrick the Halfling, and Warrick the Cleric, accompanied by Rothus the man-at-arms , once more entered the depths of Stonehell in search of the ‘red ooze’ requested by Sythini the Alchemist.  Based on intelligence previously received from the kobolds, they decided to head south into the largely unexplored area of the dungeon occupied by the “Open Sore” orc tribe. However, disaster soon struck, as they were caught in an orcish ambush before pressing too far into the dungeon. A rain of arrows, followed by a furious melee saw the dwarf Ranthor fall to the blows of the orcs and the others badly mauled. After slaying and beheading the orcs, the band retreated back to town to mourn their fallen comrade (whose body they forgot to recover) and heal up before heading back for vengeance and profit. While in town, they were able to recruit a lady magic user by the name Chanee to join the party.

Entering the dungeon again, the band had an uneventful journey to the area of the Open Sore lair. Exploring the first room, they encountered and eliminated an orcish guardpost. This seemed to have raised alarms, for while searching the room, they were quickly attacked by another band of orcs. Another furious melee ensued, which this time cost the man-at arms Rothus his life. Warily, the band began to advance deeper into the lair, only to encounter yet another band of orcs rushing to confront them. In a flurry of missile fire and hand to hand combat, Warrick fell, but had his wounds quickly bound such that he survived, weak but alive.  At this point, Erijay cast her characteristic orc-eliminating sleep spell to keep from being overwhelmed. Now short two men and spells, they wisely choose to return to Westmist to nurse Warrick back to health and hire more men at arms. 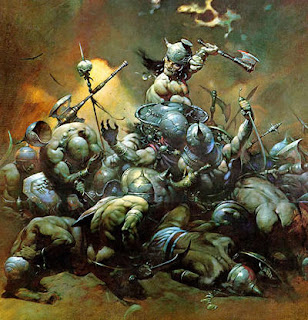 After waiting two weeks for Warrick to recover, the band hired three new men at arms (Buris, Dermore, and Corgos) and made yet another foray into the darkness.   Reaching the orc lair again, they now found all the rooms eerily empty, showing signs of having recently been hastily vacated. With nothing obvious to keep them there, the adventurers choose to continue the search for the ooze, this time heading south. Entering a hexagonal chamber decorated with woodland scenes, they encountered a young girl sitting on the floor, her head down and long hair covering her face. Turrick approached and attempted to engage her in conversation. The girl did not speak, write or otherwise communicate except to shake her head. Then suddenly, before Turrick could react, she jumped up and ran to the south.  Hastily, the band headed in pursuit, which was interrupted when Dermore triggered a pit trap and fell to his death.  Stopping only momentarily to ensure Dermore was beyond help, they pressed forward into two successive octagonal chambers, one with a mountain motif and the other with a pastoral theme. Here they halted, found no sign of the girl who had easily outdistanced them, but likewise no sign of where she had gone. All exits from the room were blocked by heavy iron portcullis. While searching the room for another exit, sounds of fighting were heard beyond the east portcullis, which gradually died off as they looked for some mechanism to open it. Finally, Erijay relied on brute elven strength to open the gate, which was then barred open with iron spikes. Beyond was a large room, occupied by a number of mauled kobold bodies. Further east was another room with signs of heavy traffic and smells of cooking.

Rather than go too far off track, the band backtracked to the mountain-themed octagonal room and once again Erijay opened the eastern portcullis. Finding more rooms, they encountered a band of goblins, the first such creatures meet in Stonehell.  Choosing diplomacy over force this time, Erijay engaged them in conversation. While wary at first, the goblins quickly realized Erijay was the great “Elf Witch” who had been instrumental in eliminating their hated orcish foes! The goblins and orcs had been in a turf war in this part of the dungeon, and the band of adventurers had more or less eliminated to orcs, letting the goblins come out on top in the contest.  The few remaining orcs had vacated the area some days before. On Channee’s request and in gratitude, the goblins  led them to the cave with the red ooze. 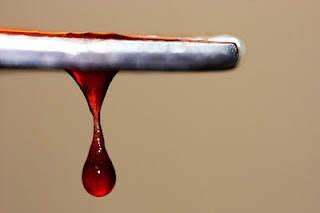 Turrick, Chanee and Erijay began to collect the valuable fluid, while Warrick and the remaining men-at-arms stood watch over the cave entrances. The collection process was quite slow, and minutes dragged to hours as they worked. The band was thrice interrupted, once by a harmless flock of bats, and once by a band of bezerkers who were easily dispatched but with the loss of one more man-at-arms, this time Corgos.  The third encounter was most dire of all, as a flock of stirges attacked and the creatures were able to latch on and start to drink the blood of almost everyone. The situation was grim and a total party kill likely, but Erijay had luckily been unharmed in the attack, and used her sleep scroll to save the day. Contemptuous of the danger and determined to finish their task, the band filled all their collection vials and headed out of the dungeon as quickly as possible. They made it as far as the spiral staircase leading to the surface, only to have their way blocked again by bezerkers. A quick fight ensured, and the bezerkers slain, but not before the final man-at-arms Buris fell to their clubs.

Back in town, the band sold the collected ooze to Sythini for the princely sum of 1200gp. Finally flush with cash, most upgraded amour, weapons and supplies in anticipation of another expedition into Stonehell.
Posted by ChrisS at 7:23 PM