The latest excursion found Turrick alone and left to his own device;  Erijay was again deep in arcane mysteries and Rylee was putting in his shift at the Temple of the Three Virtues. Not being especially eager to face the dangers of Stonehell without his usual companions, Turrick instead rounded up some hired help to explore a little of the area surrounding Westmist.  While casting around town, Turrick met a fighter by the name of Chaz who had heard the bands tales of adventure in the taverns about town and wished to join Turrick. Turrick agreed, and meanwhile recruited an elvish man-at-arms by the name of Elineel as well. And of course, Hamburger the loyal guard dog was not about to leave his masters side.

While discussing what to do and where to go, Turrick received a message from Sythini the Alchemist, with an offer of further employment for the halfling. She this time needed a pile of curious mushrooms, the Findler’s Green Swamp Mushroom, for use in her alchemical studies. Turrick eagerly agreed to help, and Sythini gave him directions to a place known as “The Devil’s Cauldron”, a bowl shaped valley nestled on the edge of the foothills west of town, in the Marsh of Whispering Mists. 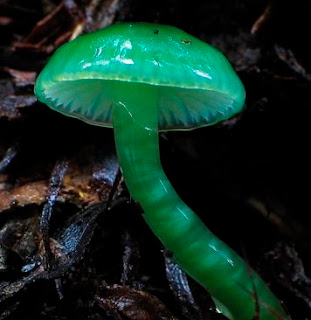 Collecting his compatriots, the party headed out of town and located the “Cauldron” easily after a few short hours, flanked by the hills to the north and two rock spires to east and west. Initially following a faint footpath, Turrick and friends soon wandered off the trail to explore and search. Exploring sloughs, hills and copses of wood, they did find a number of the strange green mushrooms. They also encountered some odd sights; a perfectly round rock half buried in the swamp; an old corral of unknown providence; and both a dead mule and the skeleton of a huge snake. They also encounter a strange standing stone inscribed with “Here Lies Greatness” in archaic Common. Curious, Turrick and Chaz dug for hours only to find the base of the stone and nothing more, which they then toppled into the marsh with a thud and a splash.

While wandering, they also encountered one of the giant marsh snakes, which they were able to pepper with arrows and javelins before it closed within striking range. It did, however, grab Turrick and was ready to squeeze the life out of the little halfling. Turrick’s phenomenal luck held, however, and the band dispatched the monster before it turned Turrick into jelly. They also encountered a nest of giant toads, sitting in the middle of a huge patch of mushrooms. A flurry of missile fire killed one and drove the others away, and the band wiped away the toad poop and filled their sacks with fungal goodness.

Next stop was a large pond, in the centre of which stood a wooded island obviously loaded with more mushrooms. Climbing a nearby hill, the three cut some trees and built a narrow bridge so they could cross to the island. Bridge in place, Turrick sent Elineel across first, but the clumsy elf promptly fell in the water.  While Turrick was helping the elf out of the pond, a huge catfish head-butted the bridge. Quickly, Turrick put an arrow in the beast, only to be shocked and surprised when “Old Whiskers” the catfish yelled out “Wha did ya do dat for? I just wanted to talk!”. The talking catfish had apparently lived here for many long years, and didn’t get many visitors. Turrick was able to negotiable with the fish, trading free passage across to the mushrooms for a meal of diced snake. To which “Old Whiskers” agreed, although he did indicate elf would make a fine supper as well. 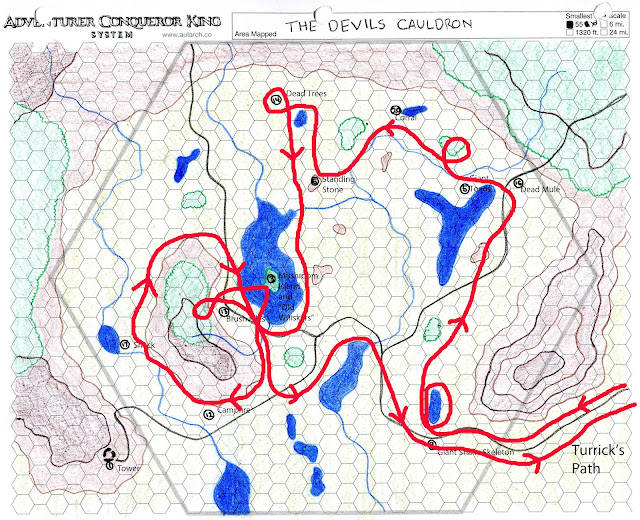 The interlude with “Old Whiskers” was interrupted by another giant swamp snake approaching to attack Chaz, who had remained ashore to hold the bridge in place. Turrick decided to head to the island for safely first, while Chaz and Elineel held off the snake and then followed once the halfling was across. Elineel had other ideas, and pushed Turrick off the bridge and raced across himself. Luckily, Chaz and Turrick were able to fend off the snake, with some magical assistance from the now safe elf, and aided by the teeth and claws of Hamburger.

The snake defeated, they chopped it up to give “Old Whiskers” another meal, and then withdrew the bridge. This stranded the cursing Elineel in the middle of the lake, unable to cross without risking becoming part of the big catfish’s menu. Leaving the elf to cool off and learn a lesson about abandoning companions in need, Turrick, Chaz and Hamburger explored some more.  They found an old campfire, and old lean-to with a skeleton lying on the cot inside, and noted a ruined tower on the western spire of the Cauldron. Already loaded down with mushrooms and not wishing to push their luck, they decided they had explored enough for one day. Having collected and placated the elf, they headed back to Westmist to collect their mushroom fee.
Posted by ChrisS at 10:17 PM