Forest of Wyrd Session # 19 - The Birds and the Bees 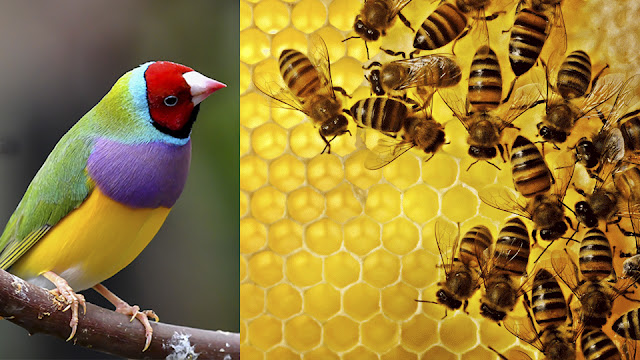 Leaving Thrax with Feedbag and the wagon, the rest of the party moved cautiously towards the tower. Getting closer, they could see someone in the  clearing in which the partially ruined structure stood. He was dressed as a Sarsen Thayn; earth tones, short hair with a long lock in the front, drooping walrus moustache. Gnarl noted right away he looked a little anachronistic, like the man in Clodwin's painting. The thayn alternated between pacing back and forth, sitting and watching the sky, and in general just looking deeply despondent. Circling around the tower to ensure there were no surprises lurking there, the party then approached the man. He was at first excited to see them, particularity Ranza. But quickly fell once more into despondency, muttering to himself "Alas, it is not she". Opening a conversation, they were told an extraordinary tale. The man said he was Cenric, the name of the brave knight from the treasure map's tale. But that was where  the similarities ended. He told a story of hunting one day, here in these woods at the edge of his lands. He shot a bird, a swan, with his bow. But when he went to look for his kill, there instead came to him a beautiful elfin woman in a long white dress. She chastised him for harming the fowl, and geased him to find the feather lost by the bird in the encounter, and return it to her in the old watchtower clearing. She would then  free him if he swore to never hunt swan again. Cenric held up a large white feather, saying he found it long ago but the lady never returned. Had the party seen her?  The party had to break to the Cenric that they had not seen anyone of that description. Questioned further, they learned he had been here nearly two centuries, protected by the power of the geas from death, hunger and physical weirdness.  He could tell little about the surrounding area beyond what the party could see from the ridge; he had been no where but the clearing for the two centuries. Asked about any other people nearby, he mentioned only some marauding hobs in the woods below the ridge.

Ready now to take leave of the thayn, Hobbs gallantly told the desperate man the party would bring back the woman if they found her. At this Cenric brightened, and reaching into his pouch, hauled out the pommel of a sword. It was a great black onyx, covered with a filigree of silver and iron. This he said was part of his sword, Stonethorn, forged by the Wose to fight the dark fey. The lady had taken the blade and hilt when she laid the geas. He promised the party the pommel as reward if they return with her to free him from his woes. From her they could get the remaining pieces.

Taking on Cerwin's quest, the party first climbed the ruined tower to have a look around. Although it made sense to search the waters or marshes first for swans and perhaps the lady, they were intrigued by the huge cottenwood and headed there initially. Hiking down the hillside towards the tree, a nagging buzzing sound rose louder and louder. Getting closer, they could see why. The cottonwood was essentially one massive bee hive. Combs of honey hung from branches, and filled holes in the trunk. Around the tree and all across the surrounding meadows were masses of bees. Most were regular honeybees, but there were more than a few giant bees and even bigger soldier drones.  Gnarl cast speak with animals and struck up a conversation with one giant bee that buzzed close to the party. He learned the hive was home to the Queen of all Bees, a massive creature some 20' long. The bee knew nothing of the swans or the lady in white, but spoke of men made of leaves in the area, and a black monster of fang and tusk in a dark pool along the north side of the valley. Asked if the bees would harm the party, they were told the party would be safe as long as they did not disturb or interfere with the bees and the tree.

Taking leave of their buzzy buddy, the party set out to loop around the tree to recon from all sides. Talk turned greedily to the potential magical properties of bee honey, particularly the queen's royal jelly. But how to get in and out alive?  Reaching the far side of the tree, their discussion was interrupted by another sound rising in a crescendo above the buzzing of bees. The sound of birds, many of them, now drifted down from a copse of trees on the hillside above. Climbing up, they found a small birch wood, but at the eastern end stood a large oak. Here was the source of the sound, for in the branches were hundreds of songbirds of all species, raising quite a racket. Getting closer, they could see letters carved in the tree: RTLLNM SGD EHMBG. Assuming it was some sort of code, the trio pooled their brains and figured it out. Shifting the letters by one down the alphabet  gave the phrase: SUMMON THE FINCH. So Ranza whistled a finch song, and in a few moments a brightly coloured bird fluttered down to a branch in front of them. Unsure of what to do next, they trio was startled when the finch spoke: "Ay then; whot you want then?" In the ensuing odd conversation, the bird told them if one of them ate him whole, they'd become completely undetectable for one hour (invisible, silenced, etc). Offer only good until sundown however. Reassured that the bird would return unharmed later, they figured here was their chance to get into the hive/tree. So the finch hopped on Gnarl's shoulder and, leaving Ranza and Hobbs in the birch wood, they headed down the slope.

When Gnarl started to get close to the cottonwood, he opened wide and the bird crawled down his gullet. Checking to ensure the bird told the truth, he then headed for a large opening in the trunk they'd seen earlier; the one the giant bees entered and exited. Crawling in, the wood gnome avoided the passing bees as much as possible, crawling up the gooey, honey dripping tunnels until he reached a large chamber somewhere near the crown of the tree. In here he observed what could only be the Queen of all Bees; a massive anthropila moving among honeycombs cells along the floor of the chamber, all the time accompanied and assisted by a cloud of giant worker and soldier bees.  Figuring these must be the daughter larva with royal jelly, Gnarl waited until the Queen and her entourage moved further along before creeping closer, and started scooping up honey into every container he had. He managed to fill four before one of the solider bees noticed the honey mysteriously disappearing and buzzed closer to investigate. Gnarl opted to not push his luck and moved away; in the process getting close to what was he found was a huge pile of jewelry. And sitting atop it was the hilt and cross-guard of a sword, which matched the pommel shown them by Cenric. Gnarl snatched this up, as well as a couple of other flashy items before the odd movement of items once more caught the attention of a soldier bee. The wood gnome once more stopped, then carefully retraced his steps out of the hive and back to Ranza and Hobbs in the woods. There he reappeared, dripping honey and covered in grass and leaves. He tasted some of the honey coating his arm, and was pleasantly surprised to find it healed his previous wounds. Tasting the rest of the gathered royal jelly, the party found each container gathered exhibited different curative properties; cure disease, neutralize poison, sweetwater, and healing.

Quite chuffed with their finds, they now decided to head towards the marsh. But by a round-about route, the check out this black monster of which the bee had spoken. Moving along the hillside, they came to a cleft or gully in the rock. At the mouth below them they could see a pool of thick black liquid, a trickle of which headed down to foul the marsh. The pool and extended back into the gully below their feet. Hobs tossed in a pebble, causing a ripple to extend out in the thick liquid. Just as it should have stopped though, the ripple started up again and suddenly a hideous beast emerged dripping from the pool. It was humanoid, roughly 8-9’ tall, and appeared to be made of hardened tar. Five white eyes and a toothless mouth gave it a very inhuman look, as did the massive 2’ spikes which it had in place of the forefinger. This thing started to climb the cliff towards them, but Gnarl trapped in with entangling shrubs, holding it fast. Standing back, they party then showered it with arrows until it died. Ranza then chopped off the spikes, while Gnarl poured the potion of sweetwater into the pool, transforming it into crystal clear waters. Ranza then stripped down to dive in and explore (revealing in the process her, until now hidden, webbed feat), and found in the tangle of bones at the bottom a curious ebony statue of a bear. She brought this to the surface just as Gnarl was jumping in to search as well. And suddenly Hobbs shouted a warning. Gathered above them on the hillside were 5 figures; withered old-man figures, in tatters of leather, with wicked cruel grins and large clubs. These jumped down to attack. Gnarl was caught unprepared in the water, and Ranza took some time to respond as she was just emerging from the pool. But Hobbs held the line, and soon a combination of magic and melee ended the threat with little harm to the party. Except as usual, Gnarl took a bit of a beating ...

GAINS
Hilt/cross-guard of Stonethorn.
Jeweled box (1300sp)
Clasp of the Imperial Dragon and Eagle, covered in amethyst and amber (1200sp)
Ebony statue of a bear standing in a fairy ring of silver mushrooms (900sp)
Potion of Healing x2
Potion of Sweetwater
Potion of Cure Disease
Potion of Neutralize Poison

LOSSES
none
Posted by ChrisS at 8:21 AM