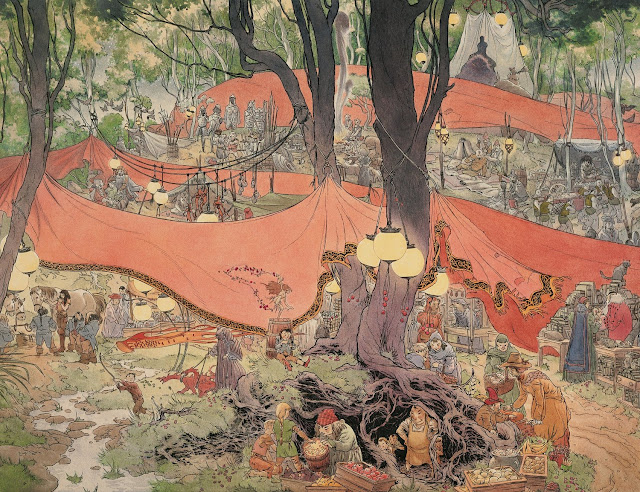 The children now seen off, the party (with the exception of Jonesomon and Vergarious) decided to head for the Goblyn Fair to look around and do some shopping. Unlike their first visit, this time they actually  had coin to spend. First order of business was to offload some of the high end loot they'd been carrying about: Silver Chalice with bloodstones (1000sp), Ring with ruby, diamond and emerald (1000sp), Garland of crystallized spring flowers (250sp) and Decorated helmet with a silver boar crest (250sp). They quickly encountered a rambunctious crowd of goblyn merchants, who swarmed over them and their stuff. The chalice turned them off immediately; anything tainted with the touch of the Church was anathema to the fey traders.  But the other three items were of interest, so the party followed them back to their booth to see what the goblyns had in trade. It was, however, impossible to ask them for anything. The goblyns would simply roll out one outlandish thing after another and try to sell it to the party. In the end, the party did turn over the three special items, as well as the pair of protection scrolls and still more coin for the following items:


They passed on the offer of an ugly, troubling statue involving a tentacle creature and a fey maiden, as well as a bottle of black dust said to detect traps (single use only). When Ranza asked if they had anything that could help them in the fey realm, the goblyns became suddenly grim and quiet before simply answering "no" and ushered the party out of the tent.


Having heard rumor that the Bishop of Brackenrae (Wulfgard of St. Viglis of the Shield)  may be interested in buying any religious artifacts, they party decided to head to the local church of St Viglis to make an appointment to see his Most Virtuousness. As they were leaving the fair, they passed a scene most familiar, to Gnarl at least; a cluster of folks standing around an old man sitting on a bucket. Gnarl suddenly felt a deep troubling and physical weakness, then noted the group around the old man included him! And Jonesomon. And their dead companions, Baihu and Ethanna. The other-Gnarl raised his head to look at Gnarl, and started to move towards him. Gnarl also felt an urge to do so, but shook it off. The rest of the party then grabbed the wood gnome, dragging him away and out of sight. Gnarl recovered once away from the other-Gnarl, and then proceeded to go hide in their cottage until time came to depart on another adventure. No one wanted to find out what would happen if he confronted his past-self.

It took several days before they received an audience with the Bishop, during which time they resupplied rations and rope. The Most Virtuous was indeed interest in the chalice, explaining it was an artifact from the  time of the Imperitor Vilorian II and would be much cherished. They also took the opportunity to ask about the paintings they still carried. He told them much the same story about the Imperitor's tomb and the fortress town as they had already heard form Coldwin and Timpanious. Except the bishop was able to give them some idea of where the two were likely located. Both would lie somewhere along the Mountains of Twilight, on the borders of the  fey realm. The tomb was built there as a monument to the Imperitor's victory over the dark fey, and in the hope it would act as a ward against their return. Fortress Iacarta was likewise placed to watch the passes from the dark realms beyond the mountains. The Bishop also note Fortress Iacarta did not stand guard long, falling into ruin some 50 years after its founding due to some combination of internal strife and the insidious influence of the unseelie.

Now loaded with more information and a cart full of gear, the party headed out of town the next day. Before doing so, Ranza re-hired Agnor and Beck to guard their cottage and it's growing pile of silver pennies in their absence. Next stop was to be Kreland's Ford, to sell the three Cuthbin paintings to Thayn Clodwin, then north to follow the treasure 'map' to the sword in the tower. They arrived in Kreland's Ford without incident, and met with the Thayn. While somewhat irritated by the party leaving him in the lurch when they left town in the dead of night, he was still more than happy to buy the paintings from them. Hobbs cleverly asked to see the other Cuthbin paintings in Clodwin's collection, they having learned important hints to future treasures and adventure in their own paintings. The Thayn was a little surprised by the interest, but was not ready to allow them access to his collection just at the moment. Perhaps visit again when they were next in town?

Speaking of town, they decided to get out of it quickly before any of the local thugs tracked them down. Heading north on the road to Twitten's Hollow, their plan was to cut across country from there to the location of the sword tower. This plan was derailed when a pair of humanoids, skin like green leaves and with long prehensile arms, leapt down in ambush onto Gnarl who was walking point. The poor wood gnome was cut down, knocked unconscious. He was being dragged off into the trees until Ranza stunned the two humanoids with a colour spray, then Hobbs and Thrax charged in with swords swinging to drive them off. They then loaded the wood gnome into the cart, and turned about, heading for the satyrs fountain to bring him back to full health. This took a few days, to get there and to heal up. One night, while camped in the fountain clearing, they were interrupted by bush imps pelting them with sling stones from the darkness. This they addressed with relative ease, killing two imps and driving off the rest. But it was curious that the satyrs did not watch over them and guard as they had in previous visits. When confronted in the morning ,the two fountain guardians noted simply that they'd had other issues to deal with that night.

With everyone now rested and healed, the party pushed on again. This time they followed their previous path, along the rivers past the Barrow of the Woad Chief, and into the hills beyond where lay the tower. Approaching the first rises, they could see the tower ruins planing on the bare ridge. Following a ruined road, they climbed up the ridge. Arriving on the open ridge just below the tower, they could see below them a lightly wooded valley between the arms of the hills. At the mouth of the valley glistered a marsh of reeds and lily pads, while at the upper end was a massive cottonwood tree, some 200-300' tall ...

LOSSES
none
Posted by ChrisS at 8:43 AM