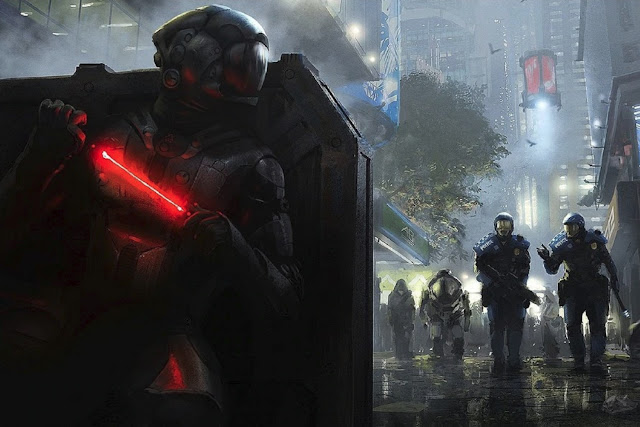 The party questions John Smith 7 to uncover more information on what or where Mentad might be, and why he is so focused on returning there. Not much to be learned from their new friend, and computer searches by Baron Kundra doesn't uncover any known star systems or planets under that name. Further questioning reveals a flight plan from Vodenhaven [1724] via Onur [1522] but uncertainty of where he started before that; others took care of those details for him on the outbound journey. Best they can tell Mentad is a location, building, or complex of some sort and John Smith 7 wants to return because it is 'home' and where he is supposed to be. They do get the name of his contact on Symera, the one who was to have met him upon arrival on the planet surface. Baron Kendra searches the name (Inga Malone) in the news databases and comes up with four hits on that name; a stripper, little old lady, a police constable and a research scientist. Thinking the scientist is their best bet, the party sends a message to Dr. Malone at the University of West Randa to tell her they are looking after John Smith 7 and can she come meet them at the up-port? They then head for a local hotel to take rooms and hide the existence of their ship, leaving Mr Fisker in charge back on the "Superfly".

After two days there is a reply from Dr. Malone. She is unable to come met them, but her associate Dr. Alphonso Trask is on the station and he can take care of the matter on her behalf. Not sure they like that idea, the party agrees none the less. Dr. Trask appears within an hour of being contacted; a well dressed gentleman accompanied by two muscular men in hospital orderly uniforms. Dr. Trask is a little disappointed that John Smith 7 is not present, but is quite willing to answer questions. While vague on details, he explains that John Smith 7 comes from a very, very wealthy and influential family and suffers from some unspecified mental illness. The family has him set up in a very comfortable and respectable mental health facility, from which John Smith 7 slipped away some weeks ago. Dr. Malone is an old family friend, and John seems to have gotten it in his head to come visit her, even though he has no recollection of that decision. The family simply wishes to have John back safe and sound; the party is welcome to keep the plasti-card with 1.1MCr (drawn on a Symera bank incidentally).  Dr. Trask assures them all will be clear once he sees John Smith 7. Could they please take him to him?

Still not certain, the party sends Dr. Trask away for now. Mr, Kurigane trails them and discovers they are staying at another hotel just a short distance away. They decide they have to talk directly to Dr. Malone, and call her up from the comm link in the hotel lobby. It takes some time to reach her, but the irritated and brusque faculty member largely confirms the story told by Dr. Trask. While still not convinced, the party sees no other option but to go ahead and bring John Smith 7 and Dr. Trask together to see what happens. But, afraid the funds on the plasti-card will disappear as soon as they turn over John Smith 7,  they first go shopping to blow the million credits on 11 grav belts. They figure some they can keep for personal use and the others can be unloaded on a lower tech world for a profit.

They bring John Smith 7 to the hotel, then call up Dr. Trask. He arrives in minutes with his two companions. The doctor walks up to John Smith 7 and simply says: "Do you know who I am John? Are you ready to come home with me?" To which John Smith 7 simply replies "Yes", and the party is left standing there with mouths agape as the doctor thanks them for their help and the four go on  their way.

A little off balance from how well that all went, the party decides to look for more work before leaving Symera. Scanning the posted want ads, they see one from their old friend Fletcher Bristow. Calling him up, they find he is delighted to hear from them again. This time he has a job that is, how do you say, a bit "below board". Are they interested? When the party answers yes, he gives them directions to a discrete location in a decrepit storage area on the station. He wants to keep prying eyes away from this one, ja?

The party follows Fletcher's directions, weaving down narrow and junk filled corridors into an obviously ill-used and largely unused section of the station. Proceeding down one passage, Mr, Kurigane senses trouble. The lieutenant catches a glimpse of figures hiding behind piles of junk in the corridor ahead.  He signals to Mr. Hammill to power up his grav belt and have a look from above. From that vantage point, he spots real trouble. At least two armed men lying in ambush. At this point the men notice Mr. Hamill, and suddenly raise their SMG's and open fire. The party returns fire and takes down one of the attackers, but another steps into the corridor behind and they are caught in crossfire. Mr. Hammill and Baron Kundra each take a gunshot and collapse into unconsciousness. Mr. Kurigane, made of sterner stuff, takes a couple of rounds before he too drops. As he starts to fade into blackness, one of the attackers comes over. Holding a blade to Mr. Kurigane's neck, the man says simply "Greetings from the Mentad Foundation" before cutting his throat and ending his adventures ...
Posted by ChrisS at 6:57 PM