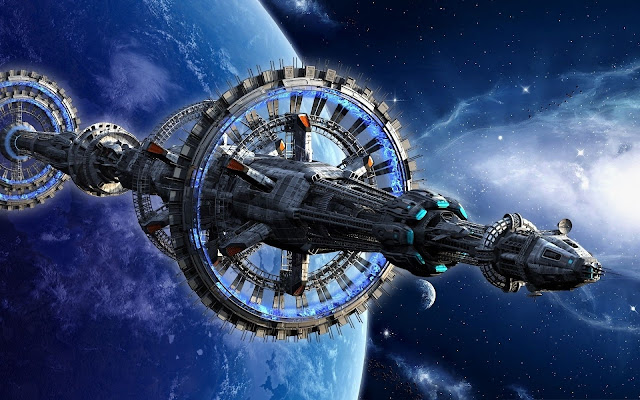 The hailing vessel is the SDB 'Vengeance'. The captain questions their origin, destination, and business in the Symera system, orders the 'Superfly' to maintain current course and speed and to prepare for boarding by a quarantine inspection team. Which upon boarding proves to be a very heavily armed and armored half squad of Symera marines. They examine the ships papers in detail, and access the ship's computer to confirm Mr. Fisker's story regarding their itinerary.  After a brusque but professional interrogation, the marines leave with a warning that there have been a rash of pirate attacks around the 100 diameter jump radius recently and the characters should watch out.


Relieved that their forged documents and re-programmed computer pass muster, the party docks the 'Superfly' at the massive orbital up-port and immediately get a ground crew busy refueling and purging the environmental syste. Just in case they have to make a quick exit. Mr. Fisker, Mr. Kurigane and Mr. Hammill head for a local dive, the "Rusty Bollard" to look for work. Preferably something reasonably honest and above board, and that might pay enough to at least cover their fueling costs. They learn about problems with refugees and travellers trapped on up-port, unable to go planet-side because they failed nanite screening, but unable to leave as they have no money. They also hear of the presence of a small delegation of Thr'a, a slug-like alien race early encountered outside their own worlds. There is nothing hopeful in terms of a job though, but the bartender arranged a meet with one Fletcher Bristow, a Symera businessman who acts as a go between to get cargoes from the up-port down to planet-side. Seems he may be in need of some 'alternative' assistance with a problem. They meet with the corpulent and mildly incoherent gentleman at a much more upscale establishment. He explains an unscrupulous business rival (Xiang Lemaire of the Xiang Trading Corporation) is making his latest job a bit difficult. He usually has a warehouse and berth for his shuttles in the same location to make transfer of cargo quick and easy. Xiang, however, booked his usual berth to keep him for using it, forcing Fletcher to use one miles away in another hub of the up-port. Fletcher suspects some sort of shenanigans, and wants to hire competent guards to  make sure his cargo (spices, alloys, and computer parts) get on his shuttles with no interference. He'll pay 15000Cr for successful completion of the job, which should take just a few days. But everything must be above board, ja?

To make everything legal and 'above board', the trio head off the the local Office of Firearms Control and Mercenary Licensing to register 'Tacyon Advantage Security Solutions' on Symera and get the necessary permits to carry weapons. It unfortunately is a bit of an eye-gouging bureaucratic nightmare, but Mr. Kurigane's charm and the careful application of 150Cr to the little old lady behind the desk gets them their incorporation papers and gun permits [250Cr] without too much delay or frustration.   Their permits only allow tasers, pistols, shotguns and SMG; however, Mr. Kurigane feels justified in stuffing an auto rifle down his pants leg as higher firepower backup. They also choose to rent a pair of gravbelts (1500Cr) to allow them to fly high cover if needed.

Reporting back to Fletcher Bristow, and joined by the surly engineer Yasmin,  they start escorting the first load. A half dozen high-capacity gravlifters run by a half dozen low-enthusiasm teamsters  work their way down raised cargo lane in the main transport corridor to a hub miles away. Dull but honest work, and the first couple of trips go off without a hitch.  On the third one, things get exciting. Halfway to the shuttle they encounter an incipient riot. A line of security in riot gear is herding a rag tag group of station-bound travellers down the main passage. Then suddenly things get ugly, as the travellers become rioters and fighting begins. As things get heated, the party notes one blandly handsome fellow right in the middle of the crowd; as they watch, he picks up another man and hurls him about 50 meters down the passage and into the advancing guards. And then, after looking around somewhat dazed for a moment, he suddenly disappears!

They have little time to ponder this new development. though. Trapped by the baton wielding security, some of the rioters start to climb up onto the cargo way to try getting around them. This gets the party involved in the fight, and several rioters are tasered before the grav-belted Mr. Fisker and Mr. Kurigane lift Yasmin out of danger and  the rioters begin to get contained. Mr. Hammill, standing guard at the front of the column, is suddenly attacked by three of their own teamsters! They try to knock him off the cargo way as the rest of their compatriots hit high speed on the grav-lifters and make to break away. A well aimed auto-rifle shot drops the lead driver and blocks their run, followed by a few taserings for their trouble. At which point all the fight and flight leave the remaining teamsters and they surrender.

While Yasmin tends to the one who was shot, the others are zip-tied and questioned.  They were hired by someone they didn't known to take off with a load of cargo, dump in in a side passage and then get paid for their trouble. Fletcher's decision to hire guards put a damper on the plan, but the riot made for a good chance. Mr. Kurigane radios Fletcher to tell him what is happening; the business man tells them to turn the teamsters over to security and guard the cargo; he is sending more (more reliable) men to finish shifting the cargo. The interaction with security is generally good, at least once the troopers have examined their TASS documents and permits. However, one trooper noted the use of a military weapon in the fight, which is clearly not allowed under their permits. Somewhat reluctantly,  but determined to stay within the law this time, Mr. Kurigane turns over his rifle in return for a summons to appear before a magistrate at a later date if he wants to try getting it back. At least the trooper waives the fine.

The rest of the cargo transport goes without a hitch, and Fletcher Bristow offers his praise, payment and promise of additional work at some time in the future. Later everyone is back at the 'Superfly' to plan next moves. Suddenly, the mysterious stranger from the riot appears. He awkwardly introduces himself as John Smith 7, and asks for their help getting him back to Mentad. No one knows where that is, and neither does John Smith 7. He was sent here to go down planetside (he doesn't know why) on Symera, but for some reason failed the nanite scan and was trapped on the station. He doesn't know what to do now. The party asks questions about what is is; android, robot, human, something else? But John Smith 7 does not know. Asked if he bleeds, he rips open the flesh on his arms to show them he does. Mr. Hammill asks if he needs help to staunch the wound, but John Smith 7 simply closes his eyes and in less than a minute is fully healed. The party is somewhat reluctant to get involved with the mystery man(?), until he brandishes a plasti-card loaded with 1.1MCr and offers to pay for their help getting him back to Mentad. Well, now maybe they can help after-all ...
Posted by ChrisS at 7:59 PM