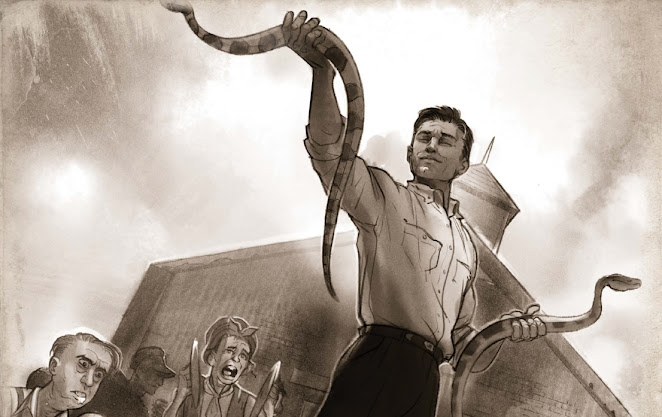 The team spends a quiet night at the hotel mulling over all they've seen and heard, and in the morning don their Sunday best and head for the Rev. Kornfield's outdoor service. They arrive to find much of the town there in the street in front of the burned church. The Reverend himself arrives shortly, accompanied by Sheriff Benson and a couple of men carrying a large wooden crate. The Reverend launches into the service, opening with a pleas for forgiveness for those responsible for burning the church (which does not seem to please the Sheriff). He then launches into a fiery sermon with a definite serpent theme, before having the two men open the crate. He reaches in and hauls out a pair of rattlesnakes, and calls upon the faithful to come forward and take the creatures in their hands, for "true believers will not be harmed by the children of the god".  Several worshipers do so, before one is bit. He survives the event, but after Ivy checks him over, he leaves the crowd dejected for having failed in the test of faith. Rev Kornfield then turns to the team, and calls Zeke up to test his faith. Zeke passes the test to Rev, Kornfield's delight, who ends the service by announcing he will lead these new faithful on a pilgrimage into the wilderness the next day,.
As the service breaks up, the team finds an empty house nearby to hide in and listen in on the conversation between Rev, Kornfield and Sheriff Benson using the serpent person listening device. The Sheriff is vehement that they track down and punish the Dissidents and non-believers, blaming them for the church bombing. The Reverend however maintains a conciliatory tone and forbids any rash action by the Sherriff. The team then takes the chance, with the Reverend busy, to search his house. The only thing of interest they find is the Reverends huge leather bible which they steal. A cursory reading shows it to be a large, leather bound tome, which was originally a standard Bible. The margins contain many handwritten notes and drawings. Some passages have been amended, some crossed out, and replaced with new ones, all the a strong Yig theme.
Hoping to learn more of where this pilgrimage will lead, they track down Greg Shaw. The young man directs them to Hillard Fowler, owner of the lumber yard. He knows quite a bit of the rocky hills south of town and might be able to help them. They track Hillard down at the Deer Head Saloon, and learn he too is a Dissenter who does not like Rev Kornfield. A very drunk one mind you, but he does recall a series of caves in the rocky hills that would be worth investigating. Grabbing a truck from the lumber yard, the five of them head south over bad roads and around abandoned farms and fields until they reach the hills. Hillard directs them up a rocky draw, where they find a cave entrance. When Ivy, Zeke and Oz attempt to approach however, they are hit with an unnatural blast of hot wind emerging from the entrance. Zeke is battered and tumbles halfway down the draw, but Ivy and Oz are able to grab onto the rock and haul themselves inside, battered but now out of the wind.
Inside the cave the pair find the body of what looks like Rev Kornfield, laid out naked on a slab of stone. Except the body has a reptilian cloaca instead of genitalia. And it also appears to be alive, but in some form of hibernation of statis. Oz attempts to touch the slab and use clairvoyance to get a picture of what happens here, but oddly finds he cannot force himself to do so. Ivy however gets a foreboding sense of the presence of Yig, the father of snakes. And draws the conclusion that this thing on the slab is somehow responsible or tied to the Rev, Kornfield's 'miraculous' powers. She take a rope and with great strength of will is able to lasso the body around the neck. She hauls it our of the cave, and the rest of the team gathers around to discuss what to do next. Zeke is somewhat reluctant at first to destroy the body, but in the end agrees. Ivy slits it's throat with surgical precision, then they toss the remains back in the cave and dynamite the entrance shut.
The team heads back to town and, after dropping Hillard back at the lumber yard, head towards the burned church where they'd spotted the Reverend and Sherriff as they drove into town. Hiding nearby with the listening device, they overhear a heated debate. But this time it is the Reverend who is upset, raving and ranting and insisting they head out right away to the pilgrimage site as something is wrong. The Sherriff meanwhile tries to calm him down, saying they can leave in the morning as it is now getting dark.
The party slips away and returns to the hotel for the night. It's decided Zeke will still go on the pilgrimage, and the rest of the team will head separately to the cave site as well. But when Zeke gets to the church that morning, the Sherriff informs him and the other new faithful that the pilgrimage is cancelled for the day as he and the Reverend have some things to do. At which the two, along with a few burly men, climb into the Sheriffs Model T and head south out of town. When Zeke reports this the the rest of the team, they make a quick decision to catch the next train out of town. figuring they've done and learned all they need to given their mission brief. And that things are likely to get very hot once the Reverend discovers what happened to the cave and body ...
Posted by ChrisS at 9:27 AM