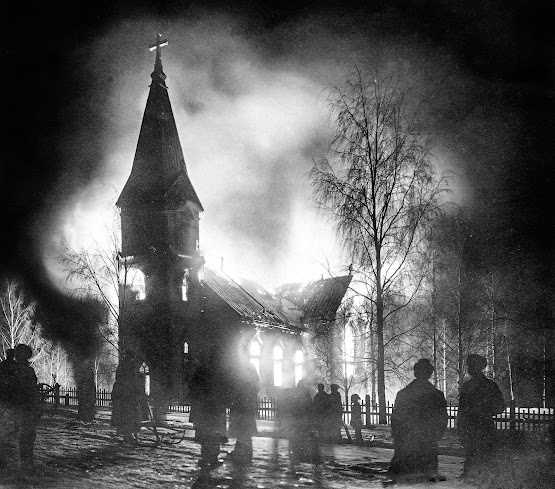 The team decides to walk the town, to see what they can learn about the local happenings and the good Rev. Kornfield. On their excursion they make the following stops, and learn and see the following things:
The team reconvenes back at the hotel. They decide to not intervene in the planned firebombing of the church, but instead will find a place nearby to observe what happens. They find an abandoned house just across the street, and watch (and listen) as Greg and Suzie sneak into the church and set it ablaze before running off into the shadows. The alarm is soon raised, and after some time the team likewise sneak out and joins the the bucket brigade of townsfolk who have gathered, attempting unsuccessfully to douse the flames. This brings them to the attention of Rev, Kornfield, who  praises and thanks them for their efforts and insists they join the congregation for a outdoor Sunday service  the following day ...
Posted by ChrisS at 6:59 PM