Forest of Wyrd Session #8 - Out in the Wilds 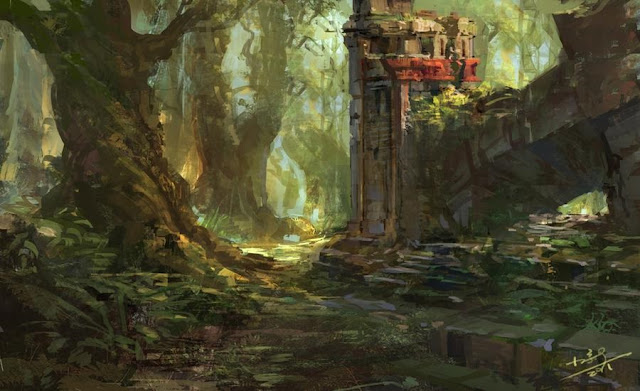 The party spent several weeks around Brakenrae, healing up and resupplying. Gnarl tried his hand at brewing blowgun poison to no avail. They also chose to spend some of their hard looted treasure on better accommodations, renting a small cottage just outside the town wall. But the call of adventure and treasure soon came, and they headed out with Feedbag and a cart of supplies in tow to search for the barrow of the Woad Chief. Not sure where to find it, they knew it lay somewhere north of Guri Bin Gur's barrow, so they decided to start there. They tried getting information out of the satyrs of the fountain, but they were tight lipped about what may lay to the north. Looking for other clues, they followed the one forest path as yet unexplored. After a couple of hours, they came around a bend and encountered a large crow in the middle of the trail. It hopped away, seeming to lead them into the trees. Hobbs and Gnarl use their woodsy skills to stealthy follow it in, with Jonesomon coming up the rear. The raven led them into a thicket. The three followed it in, and a large black widow spider descended on Jonesomon and felled him with one vicious bite (through thankfully the spider's poison did not take hold). A short vicious fight followed as Ranza and Thrax bullied in to assist, and the spider was brought down with little other injury to the party.

A pair of bodies were found, wrapped in webs and hanging from the branches. Hobbs cut them down, which when unwrapped  revealed a pair of very dried and drained husks, both of which with their eyes plucked out. Jonesomon relieved one of a pouch with a few coins and gems. Gnarl also successfully removed the spiders venom sac for future use. Ranza meanwhile turned her attention to the raven. Using the potion of clairvoyance from Thrax (who mysteriously now disappeared in a glitter of fey magic), she scared the raven into the sky to have a look around through it's eyes.  The changeling got a pretty good view to the north. A rocky tor lay to the north and east, while north and west was a string of small lakes. The land was almost completely forested, except for three small open areas to the north-west, north-east and directly north. While she could see no barrow, the party decided to follow the stream north from Guri-Bin-Gur's tomb, which Ranza had observed lead into the string of lakes. There certainly wasn't another easy way to travel, as no roads, paths or trials could be seen. First stop though was back to the fountain of Pan, to bring Jonesomon back to full fetter and to rest for the night under the watchful eye of the fountain guardians.

Next day they started along the small  stream, laboriously leading Feedbag and the cart through the cold waters. The light was more than half gone before they reached the first lake and started around it's edge, their ultimate goal being the north west clearing to see what there may lie. Halfway up the lake, they came across a small herd of red dear.The animals were upwind and did not notice the intrusion, so everyone hid back in the woods while Gnarl used his speak with animal to great the alpha buck and question it about the area. He learned the clearing they were approaching contained a village of men, while the one closest to their east contains ruins inhabited by small vicious humanoids. Gnarl graciously thanked the noble animal, and the herd cleared out as the party passed by.

Several more hours of slogging through the rushing waters of the stream brought them nigh on the clearing. Gnarl and Hobbs  slipped forward to have a look, finding in the clearing a village of crudely built huts at the centre of a circle of standing stones. They saw a number of people wandering around, but no signs that this was a organized military camp or anything obviously threatening. So the two went back to get Ranza, Jonesomon and Feedbag, and they all entered the clearing as non-threateningly as possible. They'd made it halfway to the stone circle when they were noticed, and a hue and cry was heard in the village. Very quickly, a couple dozen men and women stood armed and ready at the edge of the circle. They party stopped, and visually and verbally indicated they came in peace and meant no harm. Out the crowd stepped a familiar figure; Ofra the erstwhile tomb robber.  He greeted the party are cordially as before, and introduced himself as the spokesman for the people of Farend. And inquired as to the party's purpose in being there. He was told quite truthfully they wished only for a place to stay the night and perhaps a little information on the area. Ofra agreed to let they camp inside the stone circle, which provided protection form the fey. After the party had settled in, Ofra and two others (Aminius and Loppa) joined them around the fire. The party learned Farend was a village of outcasts, criminals and others looking to avoid the company and attention of others. Of the surrounding area, he confirmed what the deer had told them of the ruins inhabited by creatures he called bush imps. He also noted something lived atop the rocky tor, but could not say for certain who or what. He knew nothing of any barrows or other burials though.

Next day the party took leave of Ofra and friends, backtracking along the river and then looping back north to get to the villa on the lake. That took all day, so they camped for the night some distance from the ruins, not wanting to risk a battle with the fey in the rapidly falling twilight. Next morning they approached he ruins. From a distance they could see the ruins of a tumbled down villa Jonesomon dated to the Third Imperium 300 years before. It stood at the top of a rise, and down the slope towards the lake lay the remains of a columned garden with a ruined stone dock at the waters edge. The party moved around behind the villa, and once more Hobbs and Gnarl slipped ahead to scout. They came across a trio of little greenish humanoids in the process of torturing some small woodland creature. Hoping to take them out quickly, the hedgefey and wood gnome rushed forward but could not lay any blows. A general melee ensued as Ranza and Jonesomon rushed in to help. One bush imp was cut down, but the other two slipped away and fled into the overgrown ruins. But the party was not alone for long, for soon they were surprised by a dozen of the little savages pouring out of the bushes. A hard fight ensued, with sword and spell used to bring them all down. One was spared for questioning. The creature was obviously crazy, reacting not at all to threats, saying only it was going to rejoin the chaos of death. The party tired to squeeze information out of it, focusing on the imps treasure and location of any barrow, but to no avail. The imp did let slip that a witch lived atop the tor, and maybe they should ask her (maniacal laughter followed). This was enough for Gnarl, who relieved the creature of a silver flask it carried on it's back (containing, he soon learned, a potion )  and then sent it on to the great chaos ...