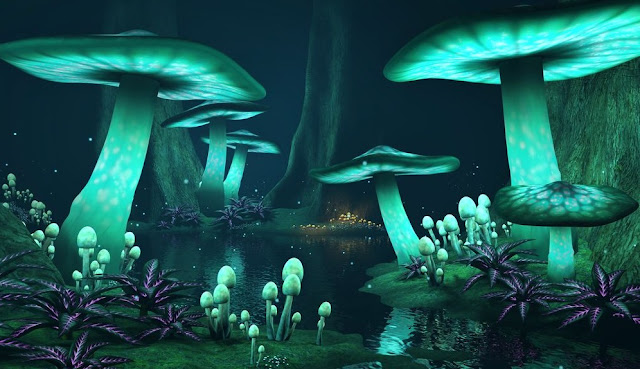 Standing next to the ruined tower, the immediate task for the party was to calm down the screaming Alish. Baihu just upset her more, but the paladin Ethanna was able to channel some sort of motherly instinct to get her to stop crying. Despite Jonesomon snarling in the background about the paucity of treasure on this so called rescue mission. Taking stock of resources, everyone decided it best to return through the gate to rest and refit, then come back to search for the other children (they didn't really believe that they had both ended up in the goblyn's stew-pot). This set Alish off screaming again. Still not speaking, she was silently adamant that she would not leave until they found her brother and sister. So the party reluctantly set up camp and rest for the 'night' under these weird twilight skies.

Lighting a roaring fire, the night was uneventful until the middle watch. While Ethanna sat at the edge of the circle of fire light, she was verbally accosted by  pair of angry feminine voices. They expressed their extreme displeasure at the party's presence, their polluting the forest with the smoking fire, burning the trees, etc. Challenged to show themselves, a pair of  elfin women of stunning beauty stepped forth into the firelight, nearly blinding the wyrd paladin with their radiance. Engaging verbally with the two pouty and petulant fey, Ethanaa found they knew quite a bit about what was going on with Blasphemous and the children. Essentially, the fey had kidnapped the children to give to Blasphemous so he would would not prey on the fairy folk.  Told that Blasphemous was dead and they party simply wanted to get the children back, the pair pointed out the thicket of wood nearby where they said the other girl child was held by a dead treant. They were very insistent that the party go get her now and leave ASAP! By now, the rest of the party was up  (and all luckily averted their gazes sufficiently to protect their sight) and agree it best to just finish the job and get out of this world.

The two nymphs led the party to the thicket, a mass of dead and dying trees covered in a white fungus. Jonesomon brandished his cold iron dagger and tried to get the two the lead the way, but the nymphs recoiled in disgust from him and the blade, disappearing in a blink. The party was forced to scout ahead themselves, and ended up in a small clearing. At one side was the dead treant, covered in a thick layer of the white fungus and with a look of horror frozen on it's face. Here they could hear the sound of a young girl singing a nursery rhyme. Alish brightened up and pantomimed that it was was sister Peta's voice. Moving forward, they party uncovered a hole in the gorund from which the sound seem to emanate. Pushing back the turf, they headed down the muddy slope and into a large chamber filled with a psychedelic display of huge mushrooms. Baihu was able to identify one as a 'Rotting Mazegill', a deadly poison when ingested. Gnarl carved off a few samples for later use.

The singing could still be heard from the far end of the mushroom cave, so the party headed that way. The singing always seemed to dance just ahead of them, leading them around in circles and through various chambers; one with a pool of scummy water and a stream running uphill, another with an odd spiral pattern of flagstone on the floor, and yet another with walls covered in a glowing pink and white fungus. This Gnarl identified as a weirdly intelligent thing; touch it and it will take on your own form and follow you around like a glowing pink shadow.  At a number of points in the narrow winding passages the party discovered pits concealed beneath layers of brush and mud (two were found when Gnarl and Baihu fell into them). Examined closely, they found the pits were relatively fresh; someone had dug them in the last day or so. Which pretty much confirmed what they had begun to expect; someone or something was leading them on a wild goose chase.

The party decided to hunt down whoever or whatever was leading them around by converging on the last chamber from several directions. There they hoped Ethanna could set up a circle of protection to trap whatever it was (assuming it was fey), The plan went astray, however, when  Jonesomon stepped in the thick mud at the centre of the chamber. A muddy humanoid form rose up from the floor and clobbered the specialist, laying him out cold and leaving a thick layer of mud over his face which began to suffocate him.   Baihu grabbed her fallen comrade, and then the whole party retreated into one of the narrow passages, Ethanna taking point facing the mud guardian. Luckily, it could not move beyond the room, so she began to pepper it with arrows. But then from the end of the line came a cry from Baihu; something invisible had stabbed her in the back! After another hit, she dropped to the floor bleeding out. There was then a mad scramble for position as Vergarious and then Gnarl (standing on the changeling's back while he lay in the mud) tried to fight their hidden foe. They did strike a few blows, and after a while of their fumbling about, their foe appeared. It was the little fey fellow who'd led them through the gate in the first place! With a titter and a grin, he said "You're all much too fun; I'm going to enjoy bedeviling you all again!" Then with a wink, he disappeared.

By this point, the mud guardian had been knocked down and the party dragged themselves out of the muddy hole and back into the clearing. Jonesmon and Baihu were made comfortable, and Gnarl decided to check out the dead treant before the party headed back to the gate. (They'd settled again on leaving and recovering, coming back later to search for Peta.  This time the traumatized Alish did not disagree.) Gnarl found a hole in the rotting treant. To his surprise, inside was a chamber much too large for the space, and there sitting on  rough stool was a young woman of about 25 years. She was oddly dressed in a mix of scraps of clothing, plus leaves and boughs. And she spoke and acted like a 10 year old. When Alish appeared  with the rest of the party, the woman was most excited to see her and they started to banter like long lost friends. Or rather, separated sisters, for the party quickly learned that this was Peta. But physically much older than she should be.

That said, the party now had both surviving children (having accepted the nymphs word that Sim really had been stewed in the goblyns' pot). And back to the gate they trudged, shared the magic apples and made their way back in their own mortal realm once again ...

LOSSES
nil
Posted by ChrisS at 9:54 AM