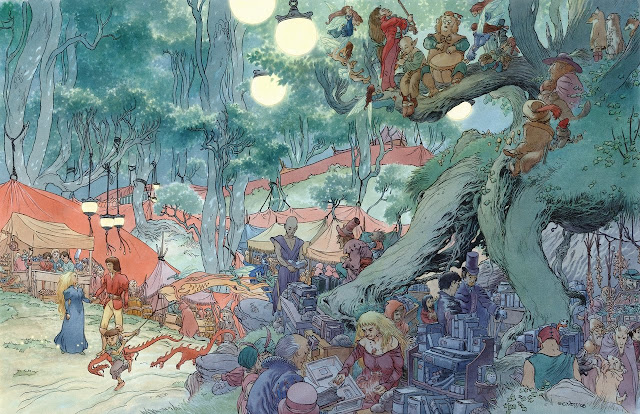 Four met at the Goblyn Fair, held each High Summer outside Castle Brakenrae. They did not make it far into the fair before they waylaid by an old man sitting on an overturned bucket; 'come drop a silver penny in my cup and I will tell you tales of old, of days before Faerie'. The four complied and he told them stories of the first men in this place, the D'war. Fantastic tales of great deeds and great treasure, particularly about the legendary hero Guri Bin Gur. The old man hinted that he could tell them where to find the hero's barrow, which was almost certain to be filled with treasure untouched and free of the curses of the dark fey. Another handful of silver and he gave them directions in the deep of the Forest, not much more than a day's march away [Hex 09.08].  Pressed by Jonesomon for more tales of great artifacts and treasures, the old man wagged his head, picked up his bucket and wandered off through the now thickening crowd.

Jonesomon was ready to head off to the barrow right away, but then Ethanna overheard a fretful mother. The wyrd paladin intervened, and learned that the woman's [Gwynna] three children  [Peta, Alish, Sim] had gone missing. The trio had gone off to explore  an old ruined tower just north of town, a place rumored to be touched by the fey realm. She implored Ethanna to go recover her children, to which the paladin gallantly agreed. Much to Jonesomon's dismay. Gnarl took the paladins side, while Baihu remain mysteriously aloof. Jonesomon was placated by the promise of looting Guri Bin Gur's barrow after recovering the children. Before heading off to the ruined tower, the party was accosted by a fey goblyn named Humbuddle, who tried to sell them some rocks. And succeeded in getting a few silver pennies out of Jonesomon for a seemingly useless rock. Ethanna also nabbed a bright looking kid by the name of Ola, and paid him a silver penny to keep an eye out for anything weird at the Goblyn Fair; which request sent the poor lad into confusion as all at the Goblyn Fair was weird.  But he took the penny and scampered off.

The ruined tower was easy to find, not far out of town. Once the site of an outlying hamlet, the place was now ruined. Besides the tumbled down tower, the remains of several fallen buildings still stood. In one fire blackened ruin was a curious sight; a bowl of perfect apples sitting on an undamaged table. One of which was snatched by Jonesomon and tucked in his pack. Gnarl checked around for signs of the children, and found tracks leading to the apples, then away to the ruins on the other side of the trail. These led to another building, blown apart in the distant past by some blast. Inside on the grassy floor grew a perfect circle of sage. Sensing faerie evil, they stayed away for now. Heading to the ruined tower, they observed a stone stair, still leading up to the fallen second story. In the hollow below, the walls sported some amorous graffiti. Seeing nothing at the top, Jonesomon tossed up his goblyn rock; which then came hurling back down at him to the sounds of a maniacal titter. Racing up the stairs, he sensed something else was there, said something then jumping away and running off over the grass. Gnarl cast entangle to capture the thing, tied it up, then smeared the invisible shape with mud to reveal a little man-like creature about 2' tall. Questioning the creature, they learned the children ate the apples and then passed through the faerie gate in the centre of the sage circle. Told to lead the way for them, the creature dutifully obeyed. But when it stepped into the circle, it disappeared, leaving the rope behind.

The party decided to partake of the apples and step through, Ethanna going first and followed a few minutes later by the rest. On the other side, they found themselves standing into a circle of menhirs, in a land of twilight. A quick exchange of conversation also revealed that the paladin had been waiting hours for the rest to arrive.

Looking about, they could see they were in an open forest. Off in one direction was a layer of haze or smoke, looking like mist covering a lake. Next to it stood an odd, double, twisted black tower. Out of the door of which the mist poured. Heading that way they encountered a cheerful sprite, who was unfortunately completely unhelpful and could answer no questions about the children. They continued on towards the tower, and as they got closer, noted a creature standing in front of the smoking door. It was a dog with two heads, both seeming blind. One head sniffed wildly at the wind, while the other perked up its ears, alert for sounds. Before getting too close, they party called out to the dog(s). They/it reacted fiercely, charging the quartet with fangs bared. Gnarl and Ethanna set spears and did it terrible hurt, and it was not long before Jonesomon and Baihu helped finish off the odd creature.

Approaching the door, they noticed the actual wood door was much to small for the opening, allowing the mist to pour out around it. Politely knocking, they were answered from inside by rhythmic knocking. Knocking a second time, this time there was no response. So, politeness done, they prepared to enter the tower to search for the children ...