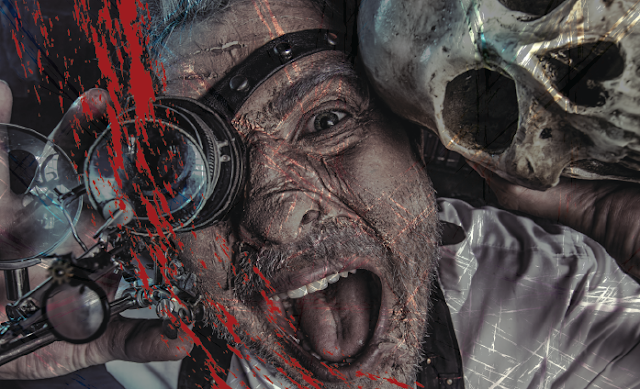 Checking atmospheric composition and pressurization once more, the three decide to get out of their vac suits. Mr. Flynn is worried about tearing or getting bullet holes in his suit, making the return trip to the Superfly difficult. They descend the well lit and fully operational lift to the reception area. Except for one light directly in front of the lift doors, the rest of the room is dark. Closer examination shows the other fixtures have been smashed. Apart from  plaque giving basic information on the ship (leased from Scientific Charters LLC) and a paper sign saying "Lysanni Laboratories" beneath it, the room holds nothing of interest. The party moves out in skirmish order down a dark hallway towards a distant dim light. They examine three rooms they pass; a neat stateroom with packed boxes, a conference room with a shelf of binders and scattered papers on the table, and a private dining room. They then emerge into the faintly lit mess hall. Mr. Fisker shines his light around, revealing a figure crouching at the kitchen door. The figure (a petite woman in tattered lab coat) first screams and covers her face, then turns in rage and rushes the party. Ms. Sumter, fearing an infection of some sort, moves to don her combination filter and is shocked to find she has a heavy nose bleed. Mr, Fisker and Mr. Flynn open up with SMGs; bullets smack into the woman but she miraculously continues to rush forward. She attempts to claw out Mr. Flynn's eyes before he is able to get the woman in a choke-hold and she drops into unconsciousness.

They whip out zip-ties and bind the unconscious figure. As the adrenaline rush drops, both Mr, Fisker and Mr. Flynn notice odd symptoms as well; one starts to cough up blood and the other's eye's begin to bleed. Ms. Sumter noted her symptoms started before their attacker got near, so the three curse their decision to break vacc suit discipline. There is obviously something in the air. The three make their way back to the suits and then to the Superfly post-haste, bundling their prisoner (who needs another wack or two from the butt of Mr. Fisker's SMG to keep her unconscious and compliant) along with them. Calling ahead to tell Yasmin to be ready with her medical kit, the four enter via the air raft bay and remain there in quasi-isolation. Yasmin suits up and checks them out, discovering they have been exposed to some unknown chemical that is causing severe internal bleeding. She tells them that without help, they'll all be dead in a day. But she does give them all a dose of fast drug to slow their metabolism and hopefully give them enough time to get back to Vordenhaven  and better treatment. Curiously, their captive has a similar blood composition but is not bleeding out.

Radioing ahead and explaining everything, they ask their contact with Lysanni (Rasim Meyer) to meet they at the starport with high end medical care. Rasim is late in arriving and has with him just an older gentleman with a black bag, a Dr. Sanchez. This doctor confirms Yasmin's diagnosis, and says it should be treated with a long bout of gene therapy to rebuild the dissolving cell walls which are gradually liquefying their insides. Vordenhaven Critical Care and Research Hospital certainly has the equipment necessary, but would be expensive. Do you have medical insurance? At this point a vicious argument ensues between the party and Rasim, who is insistent  that Lysanni Laboratories is on the verge of insolvency and cannot afford to pay for medical treatment. The disagreement ends with Mr. Flynn's hands wrapped around Rasim's throat, and a new deal is struck. Lysanni will foot the bill for treatment and increase their fee to 20000Cr each, but only if they go back to the lab ship and finish the job. Specifically, account for all the crew, find out what happened, and recover any research data without causing undue destruction (it is a rental, you know).

Deal made, the party and the captive (who they now know is a lab technician by the name of Asuka LeClair) are whisked off to the somewhat less prestigious Downtown Charity Health Services hospital for a week of being injected with fluids and drugs in an autodoc. But the treatment works and all recover. Asuka, however is not responding as well to treatment and still goes through cycles of rage, exhaustion and ravenous hunger. The party questions her and learns there are at least three other survivors, all like her. Asked what she ate on the ship, she mumbled something about the lab animals and refuses to say any more.

Stocking up on some new equipment (massive banks of lights, bacon, tranquilizer gun and tranq grenades, combination masks), the group heads back out to the lab ship. They don masks before descending the lift this time, and continue their exploration. In the kitchen they find a walk in freezer where a dozen of the crew (10 scientific staff, plus the captain and medic) hang dead from hooks. Closer examination reveals most are missing a limb of two, and show signs of bite marks. The party decided to try luring survivors, so Ms. Sumter fries up a pile of bacon on the stove to draw them in while Mr. Fisker and Mr. Flynn prepare a trap out in the mess hall. But no one comes, so the party moves on, leaving a trail of trip wires behind them so they don't get surprised from the rear. Passing though an iris valve, they follow an old trail of blood that leads into an otherwise non-descript stateroom. Checking out other staterooms they find a mix of neat/tidy and torn to pieces rooms. Some have had the mattresses and bedding removed, and in one they find nest or pile made of said items. They reach the bridge, which is mostly lit except over in front of the computer banks.. Ms. Sumter checks the computer and finds the usual routine communication transmissions from the ships to head office; summaries of research progress, maintenance data, personnel information and so on. Curiously there are a series of other encrypted data packets going to another address, but Ms. Sumter is not able to crack to code. A check of the visitor logs reveals nothing unusual, except recent visits from a pair of Vordenhaven Naval officers (Lt. Oscar Atteberry and Lt. Asha Tang).

Firing up the ship's comm system, the party transmits a "we come in peace to help you" message over the intercom, hoping to draw more survivors into the ambush they set up on the bridge. After awhile, one does arrive. Light averse and in a wild rage just like Askua, the man rushed to attack Mr. Fisker. Once more, the lieutenant hits with his SMG but does not slow the attacker, who in the end falls unconscious to a combination choke-hold from Mr. Fisker and a tranquilizer dart stabbed in his back by Mr. Flynn ...