The paralyzed members of the party recovered as Jaz, Rodrigo and Corvus rowed across the lake. By the time the two dugouts came in view of the village, the party was fully awake and functional. Their appearance on the lake immediately provoked activity in the village, and a line of spear-armed warriors soon appeared, standing knee deep in the water and along the veranda of a large building on stilts which stood in the lake. The party stood, showing their weapons free hands as a sign of peace. This was answered by a volley of spears from the warriors, all of which fell short and splashed into the water.  The party stopped rowing, and Kwinsea did her best to say "We come in peace" in the doggerel pidgin she'd used on the temple natives. After a little while, a pair of older men appeared on the veranda. They were the "Talking Chief" Faro and the witch doctor Umlat, and they beckoned for the party to come ashore in peace.

The party landed, offering the captured Oltau as a peace offering. As they turned the bone warrior over to the villagers, the party noticed everyone they saw was either older or very young. Even the warriors who had confronted them on the beach were well past their prime. As Umlat and the villagers hauled Oltau up the beach where a large bonfire was being prepared, the party questioned Faro about the absence of young people. Faro replied the party must come with him to consult with the true chief. And with that, the old man led them to the large council house out on the lake. There, Faro reverently approached an alcove at the end of the hut, where sat a small well worn statue of an old man. Faro proceeded to address this 'chief', asking him for guidance on what he should tell the party. He seemed to get some reply (although the party heard nothing), for after a few minutes Faro agreed to tell the party about 'Taboo Island'. For generations, the tribe has not gone to the island; he offered no reason beyond 'it is taboo', but did note it was once the abode of old, evil gods. Some months ago, a group of young warriors broke taboo and crossed the lake. At first the tribe assumed they were destroyed by the taboo. But then the raids began. Groups of the renegade warriors would sneak into the village at night and take the young and strong, until the tribe was left as it was today.  Faro, knowing the party had already been to the island, asked if they would return and deal with the renegade tribesmen. He was unclear if he wanted them captured and returned or simply killed off; taboo, it seemed, prevented him from being precise about that.

Abdul el Abdul, meanwhile, has stayed on the beach to watch the proceedings there. In addition to
Oltau - Post Ritual 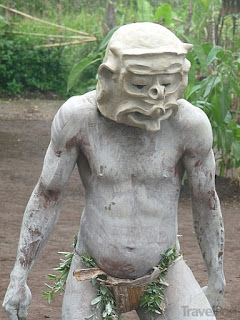 the bonfire, the rest of the tribe started cooking fires, and soon had a feast of fish, baked yam and turtle soup ready to go. Umlat had supervised the bonfire, which was fanned to blazing hot and forced to burn down quickly, leaving only warm grey ash. Into this Oltau was thrown and rolled around in the remains of the fire until he was coated in grey ash and mild burns. Umlat put one hand on Oltau's face and muttered some words. The witch doctor then declared the warrior 'purified', but still under some kind of enhancement. The witch doctor ordered him bound until he could call on the power of the Lord of the Sky to break the enchantment in the morning.The party was then feasted by the village and scattered among the village huts to rest until morning.

Next morning, Umlat once more went through some rituals with Oltau and broke the charm which held him in thrall. Questioned, the bone warrior revealed that when he was captured in the one the first raids, he had been brought to worship in front of a statue. The statue depicted a vaguely amphibious humanoid with a smooth head, large eyes and a tentacled, splintered mouth.  After that, the bone warrior become a servant of the 'old gods', charged along with the rest of the renegade tribe with reviving the gods cruel empire.

After hearing the story, Faro once more asked the party to deal with the renegade tribe. To which the party agreed; they were going that way anyhow. Faro offered anything the village could provide to help, but no warriors would accompany them. The taboo still held. The party did get some samples of paralytic poison, as well as  antidote to help protect against the poison of the renegade tribesmen. They then chose to wait until nightfall, and carried their dugouts away from the village, fearing they might be observed by those on the island if they left from the village proper. Reaching the island, they ignored the obvious entrance, and landed on the opposite side. From there they trekked back to the temple, looking for the smoke hole which opened into the main temple chamber. They found it hidden away behind some tumbled ruins. Glancing below, they could see the net back in place. Huddled around the fire were a number of sleeping forms, mostly woman and children. Pacing around were also 4-6 alert guards. The party decided to try a little surprise this time. Rodrigo would stay at the hole, and drop down a few small bombs made using the party's remaining gunpowder. Taking advantage of the confusion caused by the explosions, the party would rush the temple through the main entrance, and take control of the balconies.

Initially, all went according to plan; bombs exploded, confusion ensued, and the party rushed the balconies. Kwinsea, Corvus and Awg hit the north balcony; Chaff, Jaz, Rodrigo and Abdul el Abdul hit the south. This time they found no one there, but did observe a number of doors leading to who-knows-where. Down below, the guards started to lob spears, while the woman and children ran for the exit; the party responded with laser and crossbow fire. Rodrigo also cut part of the net free from above, and swung down to join the fray. At the same time, the rest of the party cut the other ropes, dropping the net onto several of the warriors below.

At this point, the plan started to go south. Out of a door on the south balcony burst the chief, his henchman and the witch doctor. Before the party could respond, the witch doctor cast a spell on the northern balcony, holding all three party members there. In response, Chaff cast a web, trapping the witch doctor and one of the henchmen; the witch doctor was eventually hacked to death. Abdul el Abdul, isolated on the far side of the web from the rest of the party, charged in to fight the one henchman facing him. Jaz, Rodrigo and Chaff turned their attentions to the chief. [Chaff also sent Pretty Bird to examine the giant human face carved in the wall over the exit tunnel; the familiar found holes in place of the eyes and observed another dust filled room beyond.] The fight against the chief was going well, and the big warrior was soon slain; but more danger arrived. On the floor below, the entangled warriors got out from under the net and charged the south balcony. One struck Chaff and paralyzed the sub-tall vivimancer.  Meanwhile, one of the doors on the north balcony opened, and a half dozen archers appeared, surrounding the held party members. They made signs that they would kill the prisoners if the party continued to fight, so a truce was called. After some back and forth pantomime, the party offered to trade the webbed chief's henchman for Kwinsea. The warriors agreed, and the tense trade was done. As soon as the archers backs were turned, however, Jaz grabbed the wand of fear from Kwinsea's hand, and loosed some magical terror on them. Most of wariors turned and ran back into the room from which they'd emerged. The chiefs henchman and one other warrior ran into the tunnel leading deeper into the temple complex, while two others tried to jump off the balcony and join them, but broke their necks in the fall. With the great hall temporarily in their control, Jaz, Rodrigo and Abdul el Abdul gathered up their held and paralyzed comrades, then retreated to the chief's room, barring themselves in to await their companions recovery.