The Gem Gates of the Wind Wizards of Foronaxos 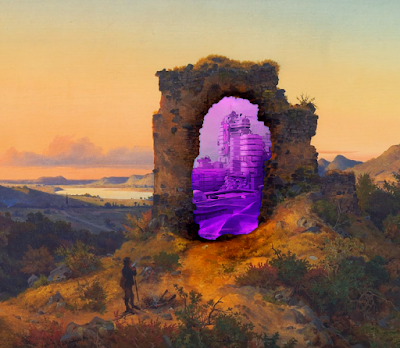 The Wind Wizards of Foronaxos were a semi-mythical cabal of powerful mages, whose origins stretch back to before the Godwars that destroyed the first fabled civilizations of man. The last known member of the order was last seen several hundred years ago, and they would appear to exist no more. They specialized in teleportation, telekinetic and extra-planer travel. Many of the currently known enchantments related to such matters can be traced back to them. They are best known, however, for the magical gem gates they constructed, which allowed instantaneous travel between far distant points scattered across the world.

The gates are typically oval or round portals caved out of stone, but can take almost any form. The only constant feature is a series of peculiar slots or receptacles arranged around the perimeter. The gates are powered by precious gems; star ruby, star sapphire, fire opal, blue diamond, and star topaz. To use the gate, gems are inserted into the slots. Each gate is tuned to particular combination and number of gems; inserting the right number/types/order of gems into any other gate would allow travel to the gate defined by that gem combination.
Gates have a variable number of slots or receptacles. It is not possible to travel directly to a destination gate if the starting gate does not have enough slots to accommodate the required number of gems.

Unless someone is left behind to remove them from their slots, gems must be left in the gate after the traveler has passed through; there is no way to remove them after passing through the gate. Eventually the gate drains the power of the gems and they will crumble to dust. How long a given set of gems remain viable is highly variable and also highly unpredictable. In general, however, a set of gems will power a gate for a period ranging from days to weeks.

Gate locations and gem combinations currently discovered by the party are: