Treasure seeking was temporarily put on hold as the party focused on finding a way to destroy the blob. A cunning plan was hatched requiring sailcloth, tar, timbers and manual labour. All of which required the acquiescence and assistance of Thorgrim and the crew of the "Serpents Revenge". The Captain was reluctant to put resources and risk his crew on a hair-brained scheme. Why not, he pondered, just go in there and wrest the treasure from the monster like good adventurers are supposed to do? Gormus and Azimer argued that more treasure could be gained if the blob was taken out first, a fact which Thorgrim was willing to accept. However, in return for the use of more of his supplies and his crew, he negotiated a new arrangement for splitting the treasure from this voyage: 50/50.

That done, the jolly boat was loaded with supplies and crew and all were set to work on the beach. At one of the cave exits, the crew set to work building a 20' extension to the tunnel out of wood, old sailcloth and tar. With the project completed, the crew headed back to the ship and the party headed into the cavern to lure the blob towards their feat of engineering. But they were barely out of the sunlight when a trio of gliding lamprey descended on the four. Two latched onto Gormus, and in less than half a minute had drained the thief of much of his blood, leaving him unconscious on the floor. A flurry of flail, trident, and belaying pin destroyed the three beasts (which Azimer scooped up and popped into his/her backpack). Gormus, his wounds bound, was dragged back to the beach to rest while the remaining three adventurers started off once more. They did not go far, as the ruckus with the lamprey must have attracted the blob's attention. They encountered the amorphous thing advancing towards them a short distance down the passage. Villius and Vort ran back to the new construction, while Azimer lured the creature onward, taking care to stay out of pseudopod range. The blob advanced to within 15' of the end of the tunnel, stopping at the point at which fresh air and sunlight was entering. Azimer shouted to Vort and Villius, and the calmonari then dove into the ocean. In response, the cleric and dwarf yanked on strategically placed ropes, pulling the tarred cloth off the wooden frame and exposing the blob thing to the air and sun. It started to hiss and steam, and retreated back into the safety of the cave. Disappointed that it was not destroyed, Azimer stood watch while Villius and Vort rebuilt the tunnel. The calmonari also placed the three dead lamprey in the tunnel, hoping that the dead flesh and Gormus's blood might attract the blob. But no luck; it advanced to the edge of the timber tunnel but would not enter it again. 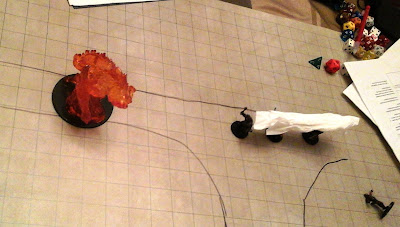 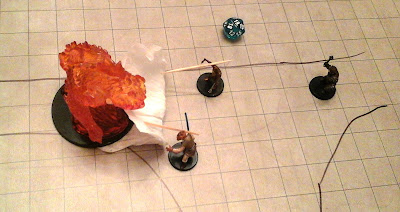 The trio convened a quick conference on the beach and hatched a new plan. Propping the barely conscious Gormus up in the sand as a decoy/lure, the trio stripped the tarred canvas from the wooden frame and rolled it up. With Vort walking point, and Villius and Azimer carrying the bulky canvas, the three headed to a previously explored entrance to the cave. They looped around trying to get behind the blob and catch it in the tunnel, It, however, nearly caught them in an open cavern; Gormus was apparently not much of a distraction. A mad rush by the bearers, however, allowed them to roll out the canvas in the tunnel in front of the blob before it could emerge into the cavern. With fingers and fins crossed, the three waited in anticipation, hoping the blob would move onto the tarred carpet. Which it did! Before it could advance too far, Azimer and Villus, using a trident and musket respectively, lifted the near edge of the tarred canvas and flipped it onto the blob. With impeccable timing and perfect aim, Vort hurled with torch at the now inflammablly wrapped blob, and it went up in a burst of flame and smoke. Villus then ripped the black powder filled apostles from around his neck and tossed them into the inferno to add another serious of explosions and more flame. This was too much for the blob, and it withered into a blackened mass of goo on the tunnel floor.

But the battle wasn't over yet! Even as they watched, the blob began to come together and reform. Desperate, Villius and Vort swung again and again with flail and belaying pin, beating the thing into submission. Meanwhile, Azimer grabbed the iron helm off Vort's head, and scooped up as much of the goop as possible. Then running at tip speed, the calmonari headed for the beach. There, the goop was hurled into the sand, where it smoked and hissed into oblivion. Azimer continued scooping and running, while Vort and Villius continued to smash at the creature to keep it from regenerating and reforming. This worked well for a few trips, but after the third or forth run to the beach, the oozy materiel ate through the bottom of the helmet. Nonplussed, the clamonari grabbed the dwarf round metal shield for the next 'scoop and run'. This, unfortunately, caused the dwarf to miss his timing when swinging his flail. Villius likewise missed, and in the confusion the blob began to grow large and strong again. The quickly strengthening monster lashed out a pseudopod at Vort, and the unfortunate dwarf was hurled across the room, his rib cage shattered. He held precariously onto life however, as Azimer and Villius tried to beat the blob into submission again. But when Azimer took a hard blow, both decided it was time to cut and run. The slowly expiring dwarf had to be left behind, as he was lying on the opposite side of the blob.

Calmonari and cleric run back to the beach, the blob following close behind. The two turned to face their foe once they were in the sunlight. Villius, grabbing some powder from Gormus (still sitting, sunburned and suffering in the sand), loaded his musket and fired at the thing. And struck it right in the centre, blowing to smithereens in a spray of hot glop. Wasting no time, Azimer rushed forward and using the shield again, started scooping the remains out into the sunlight until all of the deadly blob was gone. At last, their amoebic foe was vanquished!

After a brief rest to bind wounds and catch their breath, the two ran back to where Vort lay, Alas, the dwarf had expired before emergency aid arrived. They carried his body back and lay it in the sand for Gormus to watch over. The remain two adventurers decided to make one last foray into the cavern to look for easy treasure. But at the first sign of trouble, the plan was the hightail it out of there and come back with reinforcements another day. Back at the intersection containing the crystal prism, they took an as yet unexplored tunnel. Which ended almost at once in a pile of stones. Villius looked closely, and noted that it didn't look like a collapse. Instead, it looks like something or someone had deliberately pilled the stones there to block the tunnel. Thinking they didn't want to actually meet that who or what right now, they backtracked and choose another tunnel to explore. It led to another intersection, this one with a large 10' diamater black basalt pillar in the centre. After a cursory examination, this was bypassed and the duo moved on, coming to a large cavern. This was filled with pillars of purple and white quartz, stretching from floor to ceiling.  Looking around, Azimer also spied another pillar, only five feet tall, but topped with a crystal skull. The calmonari approached and examined it for traps. Finding nothing, Azimer moved around behind the pillar and tried to lift the skull. No luck; it appeared to be firmly attached. Upon touching it however, the calmonari's hands began to sink into the skull until she/he could feel a slippery, soft mass. Oddly enough, Villius at that same moment had the sensation of someone sticking fingers into his brain, a feeling which disappeared when Azimer pulled his/her hands from the skull. Villius pondered hard on the matter, but for some reason could not make a reasoned mental investigation as well as he once could. Curious ... 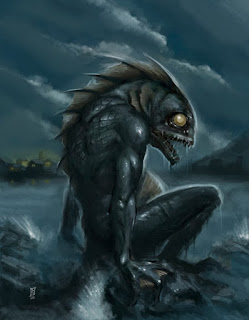 Deciding they'd pushed their luck enough for one day, the two turned back to the beach and the ship. They did not get far before encountering a pair of fish-men. They looked just like the remains found the previous day, except these two still had legs and lower torsos. The two were emaciated and looked weak, but upon seeing Villius and Azimer raised their tridents to attack. Azimer tired to use aquatic telepathy to communicate feelings of love and friendship, but the two creatures were unresponsive. The calmonari then used aquatic charm to bend one to his/her will, which did succeed. The charmed creature was able to convince it's companion to not attack, and the two followed Azimer and Villius back to the beach. Once their, the charmed fish-man signaled goodbye to Azimer before it and it's companion dove into the ocean and disappeared. Azimer and Villius, meanwhile, signaled to the jolly boat to return to the safety of the "Serpents Revenge"

KILLS
The Guardian AKA The Blob
3 gliding lamprey

LOSSES
Vort the Dwarf
lots of canvas and tar