Westmist Session #27 - The Charm of Snaking


After a couple of days resting, gathering supplies and planning, the party was once more ready to risk a decent into the Breeding Pits of Yg to confront the snake abomination and loot the treasure. Kern (with Cal and Norm and Sweet Jenny), Erijay (with Foxy the WarDog) and Riley headed downriver in the morning mist. Darnorth, his fears of snakes heightened by their last expedition, choose to stay behind and instead handed over his boots of levitation to the party as his contribution. 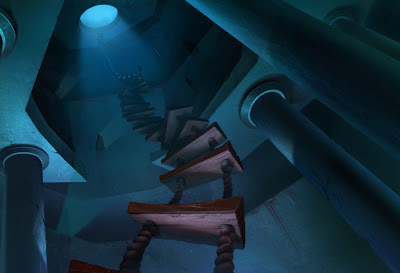 An uneventful boat ride and a march overland found them once more outside the fane over the Breeding Pits of Yg. An initial survey showed nothing new in the upper works, so the party headed straight for the well. There, the sounds of hissing could be heard from the pits below. As a first step, Riley silenced Kern, who then donned the boots and descended into the cavern, finding it much like it was before. He dropped the cool stone (recovered from the hobgoblins) at the northern edge of the snake cavern, which drove the writhing serpents away from that particular area. He also dropped a series of torches around the cavern which likewise drove the snakes away. Levitating back up, Kern grabbed one end of the rope ladder (secured to the floor of the fane by Riley and Eirjay) and carried it down to the cavern floor, securing it there with some iron spikes. The vibration attracted a few snakes, but Kern was able to avoid them. The rest of the party (minus Sweet Jenny and Foxy who were left above) headed down the ladder to the cavern. Erijay drank her potion of levitation, hoping to take the easy way down, only to find it did nothing at all. 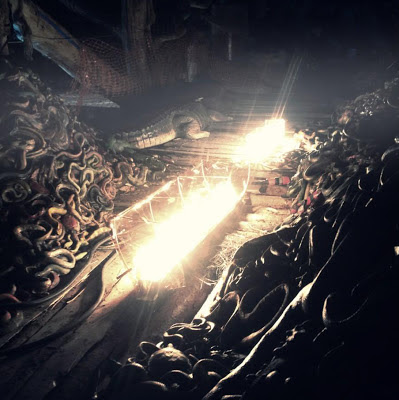 With everyone now safely below, preparation for the assault began. Riley called on Habuu to bless the party, and Erijay drank her potion of giant strength (which thankfully worked) and picked up a few loose boulders to hurl at the snake creature. Kern and Erijay, cloaked in silence, snuck forward to peek into the creatures lair with a mirror, finding the great serpent-thing resting on its mound of offal and treasure. Gathering the rest of the party, they turned the corner and began their assault. As the beast moved to confront them, a hail of arrows (and a boulder from the strengthened Erijay) battered the creature badly. But then, things began to go badly for the party. The man-serpent turned its cold gaze on Erijay, charming her into submission. While the rest of the party attacked, she tried to get between them and the creature, protecting her new scaly comrade. After next attacking the henchmen, the creature next turned its gaze on Riley, attracted by the eyes of the viper the cleric wore. He too fell under the creatures spell, and likewise interposed himself between the two warring sides.

At this point, Kern, Cal and Norm retreated rather than fight their two charmed comrades. While they watched and planned, the badly wounded serpent crawled back onto the mound to rest and recover, while Erijay and Riley tried their best to help. Meanwhile, Kern prepared to sneak around behind the beast and backstab. Using pantomime and writing (as he was still silenced) he let Cal and Norm know they should charge in and attack as soon as they see him strike, whatever the consequences may be. Kern easily made it behind the beast, but had forgotten Erijay and Riley’s infravision. They spied him and roused the creature, who turned on Kern and with a deadly poisoned bite, slayed the merchant. While Norm obeyed orders and charged in to attack, Cal was disheartened by the sight of Kern’s fall, and turned and fled the cavern. Only to run into the snakes in the outer cavern and die to their venom.  Riley now found himself torn between his new friend and old. Grabbing the fallen Kern, he tried to carry him away to seek help. But at this point the snake creature turned on him and attacked the cleric to stop him. That was enough to break the charm, and Riley saw the vile creature for what it was. Erijay likewise threw off its mental hold and turned again on the man-serpent. It quickly fell to the now reunited party, the faithful Norm landing the killing blow with a cry of “for Kern!”. 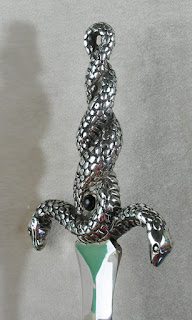 Laying Kern aside for now, the remaining three began gathering coins and gems from the pile. This was loaded into sacks to be carried, by the still giant-strength Erijay, back to the surface.  The elf likewise claimed the longsword stuck in the pile. It had a hilt and crossguard formed of two intertwined snakes, and a snake engraved the length of the blade (this was later found to be a longsword +1). While Norm stood rear guard, Riley and Erijay carried the treasure (and Kern and Cal’s bodies) up the ladder. Which just barely held under the massive weight of the elf plus the 600lbs of treasure she carried.  The elf’s potion now wore off, so they loaded down Sweet Jenny (who luckily had not wandered off or been eaten by anything) with treasure and Kern’s body, while Erijay and Riley carried more coin and Norm carried his fallen comrade Cal. Before leaving, they stuffed the remaining treasure they could not carry into sacks and suspected in the well, for possible recovery latter.

After a hard march through the marsh and a night of rowing back to Westmist, the party slipped into town at dawn the next day. Heading first to the Temple of the Three Virtues to have Kern raised (again), Riley also made an additional offering and told the tale of their great deeds against the evil Yg, hoping to get back into the Under Virtues favor.  Alas, it was seen more as boasting and sucking up, and Riley remained the black sheep of his order.  From his recovery bed, Kern arranged a funeral ceremony and  feast for the fallen Cal, which particularly impressed and comforted his remaining henchman. Erijay and Riley meanwhile exchanged the recovered gems for coin. Except for the one star ruby they found, which they instead tried in the gate in the cellar. With four of six slots filled with star rubies, the view through the gate was starting to clear, showing a verdant green forest or jungle on the other side.

Meanwhile, the March Baron arrived back in Westmist, at the head of a shattered army.  He had led his force into the Unknown Lands to harass the hobgoblins, only to decimate it in assaults on the hobgoblin boat encampment on the upper reaches of the Great River.  While rumors and worry spread through the town, Lord Merdwyn retreated to his keep to brood over the defeat.
Posted by ChrisS at 7:36 PM