Returning to the dungeon after a weeks' absence, the trio descended once more. Paot again insisted on visiting the body room, which this time was empty of cadavers. Quickly taking sample of the liquid in the casks, they then moved on to explore new areas, but first bumped into a kobold work crew hauling trash. Merrick questioned these friendly dungeon denizens and discovered that the kobolds looked after the dungeon and kept in in repair. The kobolds also revealed that they were collecting bodies for sale to the Gentleman Ghouls "down below", whatever that meant.
Leaving the kobolds to their work, the group moved deeper into the dungeon. Opening one door and encountering a group of wild looking and obviously dangerous men huddled around a cooking fire, they beat a hasty retreat. After poking around a few empty rooms, and discovering a clutch of recently hatched large leathery egg shells, the trio then stumbled upon an orcish guard post. Chased by arrows, they turned tail and fled, then regrouped to make a plan. Leaving the torch behind, Paot crept back towards the orcs to discover their numbers and defenses. Bringing that info back to Merrick and Erijay, it was decided Erijay would cast her sleep spell and take out all the orcs in one blow. This done, their throats were quickly slit and bodies looted, uncovering a handful of silver and a flask of dwarven brandy.

Retreating before the orcs companions could discover them, the three headed in the opposite direction. They soon came to a pair of stone doors carved with a danse macabre. Beyond, a large room filled with moss and grazing fire beetles was traversed, and a number of rooms with signs of death and funeral rites were explored. Discovering a secret passage, the trio was trapped in the space by a shuffle of zombies, who soon fell to the blades of our adventurers. At this point, the decision was made to head above ground to camp for the night (having been warned to not sleep in the dungeon). On the way out, they made the unsettling discover of a wall where there had not been one before; someone or something was playing with the very structure of the dungeon. Safely above ground, the night passed without incident (with the exception of a visit by a kobold work crew), and the three again regained the depths. 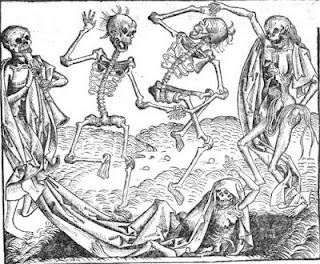 Deciding to circle around whatever the orcs had been guarding, the group encounter the dwarf Snorri Broadshoulders and his companions, deep in study of the dwarven workmanship in this part of the dungeon. Conversation ensured, Snorri expressing his dislike of both elves and orcs to Merrick. Trying to mend fences, Erijay offered a drink from her recently discovered flask of dwarven brandy, only to have Snorri snatch it away as it had been owned by one of their companions lost earlier to the orcs. Rather than push their luck with the surly bearded fellows, the trio moved on and found the 'back entrance' to the orc guard post. This room proved to be the orcs midden, occupied by another pack of giant rats. A plan was hatched to deal with the rats and smoke out the orcs. Paot would douse the trash pile in oil, then Merrick would light it and burn the rats out. Unfortunately, while dousing the trash, Paot disturbed the rats and was immediately swarmed by 15 of the verminous creatures. In a panic, Merrick hurled his torch at the pile, engulfing the rats in flame and wiping out most of the swarm. And unfortunately, poor Poat. There was no time to mourn for their friend, though, as all the ruckus had attracted the orcs. These were quickly dispatched by Erijay's sleep spell and Merrick's blade. 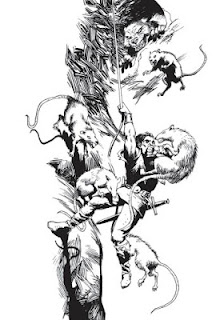 Pressing forward, Merrick and Erijay encounter another group of orcs. Out of magic this time, they fought bravely with their blades, but alas poor Merrick was felled by the evil creatures. Erijay, in desperation, dropped all she could and ran. Staying barely ahead of the orcs and dodging blows, the swift elf lead the orcs directly to the waiting dwarves, who then slew the lot. Not that Erijay stayed to find out; she didn't slow down until out of the dungeon and back on the road to Westmist with just the armor on her back and not a single copper to her name.
Posted by ChrisS at 9:58 PM