Erijay, having fled the dungeon and made her way back to the surface, stopped to collect her breath and thoughts. While doing so, there emerged from the dungeon entrance a dwarf, Gudrin by name and one of the companions of Snorri Broadshoudlers. Having helped wipe out the orcs, Gudrin showed unusual sympathy (for a dwarf) toward the elf maid and decided to follow her and  to both ensure she was unharmed and also in no way responsible for the loss of her companions. And he was frankly getting tired of going over rooms with a fine-tooth comb with Snorri, and burned for more exciting adventure. As Erijay told the story of the demise of her companions to the sympathetic dwarf, there also arrived Wallow, a cleric of Habuu looking for great deeds to perform to further the glory of his god. After short discussion, Wallow  quickly signed on with the dwarf and elf for an immediate expedition to bring the  vengeance of the great Habuu against the orcs below.

Descending into the dungeon, the group first returned  to the scene of the battle with the rats and liberated some equipment for Erijay from the remains of poor Paot. Checking out the old orc guardpost, they now encountered some wild men tearing the orc bodies  apart, so they wisely choose to head elsewhere. They went looking for another route around the orcs hideout, and soon came upon a strange room with frescos on the wall and two statues of armoured men pointing at each other from opposite corners. Trying to pass between them set off a flash of lighting which singed both Erijay and Wallow. The redoubtable Gudrin tried to twist one statue and succeeded in turning it a little so at least the bolt was less likely to go off when they passed through. While all this was going on, a pack of giant ferrets approached from the opposite side, leaving after a short Mexican standoff and before the trio could find out if the lighting bolt was triggered by rodents. They soon heard the ferrets encounter the wild men and a battle could be heard in the distance.

Passing the trapped room, the adventurers arrived in the second orc guard room where Merrick had been lost. The room was now empty, but a door was noted at the north end. Busting open the door, Gudrin faced off against the three orcs inside, one of them a massive creature. Tossing his crossbow to Erijay so she could provide covering fire, the dwarf rushed into the room  swinging his hammer, quickly followed by Wallow and his mace. The elf's missile fire proved deadly, while the hammer and mace of Gudrin and Wallow began to slam into the orcs. Alas, the vengeance of Habuu was short lived as Wallow fell to a well placed axe swing  moments before Gudrin and Erijay finished off the orcs. Searching the room (and stripping their dead companion of useful supplies), the pair uncovered a sack of gold coin and a gold armband. Erijay also liberated a finely crafted battleaxe from the dead orc leader.  Further investigation uncovered a halfling tied in a sack under the bed, and thus did Turrick join the remaining companions. 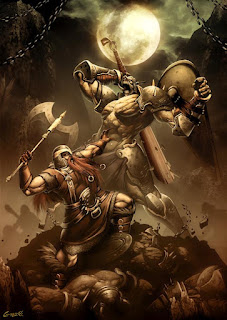 Choosing to go in the opposite direction this time, the group found a room of old smashed statues and liberated another small sack of silver and gold, along with a mysterious key. They also watched from hiding as a band of kobolds and other unknown creatures made their way down a set of stairs, thereby finding their first way down to the lowered levels. However, rather than descend at this point, they instead backtracked to an alcove  with a strange glowing gylph. After puzzling over it for a  while, the impetuous halfling jumped up and touch it, and promptly disappeared. Unknown to the other two, Turrik found himself in a small room with no visible doors and filed with books, star charts and broken alchemical equipment. Seeing another glyph, he grabbed a star chart and touched it reappearing in front of his companions to tell them the tale. Erijay then choose to enter the room the same way, and recovered a large tome a magical writing for later study.

Somewhat battered and getting late in the day, the trio returned to Westmist to rest and refit. Turrick tried to raise some cash by selling (hopefully magical) mushrooms to Sythini the Alchemist, but with no luck. Gudrin visited the Temple of the Four Virtues to return Wallows holy symbol and make an offering in memory of his lost companion, for which the priests expressed their thanks and gratitude. After unsuccessfully trying to recruit another cleric to replace Wallow, the trio settled down in the Golden Drake for a well deserved meal and rest before heading out on adventure again.
Posted by ChrisS at 8:46 PM