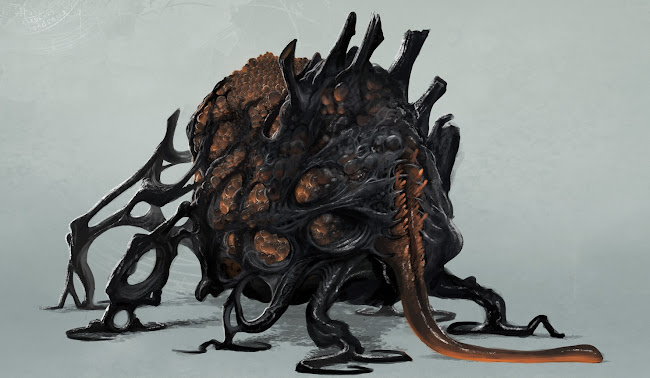 March 16th-18th, 1933
Putting their plan into action, the party heads out from the temple towards another of the wards, this time to the south-east. After a few hours driving narrow paths and searching, they come upon another capstone on top of a low mound in the bend of a stream. Oz uses his clairvoyance and feels the presence of another guardian, and sense it had been summoned here in ages past to stand guard. Zeke takes lead on a plan to blow an opening at the edge of the capstone with dynamite. Then lays another stick at the edge to be fired remotely via a detonator he rigs using some spare wire and the starting crank form the truck. The first explosion goes as planned. After some time, Oz hears the guardian squelching up the stairs, and turns to run to let Zeke blow the second charge as the creature emerges. While wounding it grievously, the dynamite does not finish it off. The creature, moving quicker than its bulk and form would suggest, lunges forward and grabs Oz in an extended tentacle, crushing the mystic to the edge of death and unconsciousness. Zeke, Ivy and Nigel make various attempts to destroy the creature with fire and truck, but in the end the long suffering Oz is able to thrust the burning torch in his hand into the creature’s body and kill it.

Ivy patches up the mystic with first aid so they and Zeke can descend into the pit. It is identical to the first one, the same construction and the same murals at the bottom. The party climbs back out and jump in the truck to head back to the temple. As it is getting dark, they hide the truck and camp out for the night. Ivy takes some time to patch Oz up further to keep him alive and on the mend. In the morning, they see the temple has emerged another 30 feet out of the ground. The previously smooth surface now shows lines between the cyclopean blocks and signs of minor damage due to the ages. Twenty feet from the top of the temple the outline of a door is now seen. Figuring they must deal with the remaining wards to open the door and unblock other potential barriers deeper in the temple, the party heads out to blow the remaining three capstones and guardians with dynamite. Their first stop though is back to the site of the battle, to syphon more gas for the truck and gather a mix of useful gear from the leavings of war. The rest of the day and part of the next is spent travelling from ward to ward, blowing each in turn and dropping dynamite into each pit to take care of the guardian lurking there.

Returning the to the temple, the party finds it hasn’t risen any higher, but now the door is wide open. The hero’s climb the outside of the screw to the door and look inside. They find a round spiral passage, 10’ wide, looping around the perimeter of the structure and descending into darkness. The decide to plunge in, but first Ivy takes advantage of the elevated view to examine the surrounding landscape. She catches glimpses of someone or something lurking in the undergrowth nearby but cannot tell what or who.

The party proceeds with caution down the tunnel. After a couple of revolutions of the passage, they see bas-relief depicting similar events to the murals in the ward pits. After a few more turns of the path, Zeke triggers a wicked blade trap and avoids losing his head by a whisker. Continuing further and deeper, they suddenly note objects falling from the ceiling. The bean of their flashlights shows them to be snakes of all types and sizes, emerging from cracks and crevices in the stone ceiling. The numbers increase as they so deeper, and they eventually raise and old salvaged tarp over their heads to protect them. And then they suddenly come upon a mass of snakes, filling the entire passage for more than 20’ feet and at least a foot deep. Here they pause to decide what to do next …